The dollar occupies a dominant role in international good and financial markets that goes well in excess of the economic weight of the United States. A central question in international economics is how solid that role is. While the creation of the euro has not displaced the dollar, the economic rise of China could represent a larger challenge to the greenback, especially as Chinese policy makers are keen to promote the international role of the renminbi, in contrast to the more hands-off approach of the Europeans.

Are such policies effective? In a recent paper (Georgiadis et al., 2021) we focus on the invoicing of international trade and contrast the impact of economic fundamentals and policy measures. Invoicing is a relevant dimension of the international role of currencies, as the position of the dollar is dominant but not exclusive, and the role of the renminbi, while still small, is increasing. Specifically, the dollar is used in 40% of international trade flows, while only 10% of trade involves the U.S. as the source or destination country (Goldberg and Tille, 2008; Gopinath, 2015; Boz et al., 2020). This indicates a substantial use of the dollar as a vehicle invoicing currency (Gopinath et al., 2020).

A broad look at the impact of economic fundamentals

A large literature has looked at the economic determinants of invoicing. A salient dimension is the presence of strategic complementarities, which lead exporters to limit the fluctuations of the price of their goods relative to that of their competitors (e.g. Mukhin, 2021). In a context of sticky prices, exchange rate movements play a large role in driving relative prices and exporters have an incentive to invoice in the same currency as their competitors. As domestic firms represent a sizable share of the competition faced by exporters, we would expect trade flows to the U.S. and the euro area to be more likely to be invoiced in dollars and euros, respectively. Also, the need to limit relative price movements is more relevant in sectors where goods are more homogeneous.

The rise in global value chains (GVC) can also play a role, as firms that are part of such a chain sell goods that include a sizable share of imported inputs, with a correspondingly lower share of domestic value added. This provides an incentive to invoice exports in the same currency used for imports in order to provide a natural hedge of costs.

We empirically assess the role of economic fundamentals using a broad sample with information on invoicing currencies building on Boz et al. (2020). The data cover 115 countries after 1999 and indicate the shares of the dollar, euro, domestic currency, and others in the countries’ exports and imports. The data for this broad sample do not systematically contain information on the renminbi, however.

A panel analysis confirms the role of fundamentals. Exporters to the U.S. or the euro area make more use of the dollar and euro, respectively. A similar pattern is observed for exports to countries that are pegged to the dollar or the euro. Trade in goods that are more homogeneous makes more use of the dollar, at the expense of the euro. The participation in GVC has no significant impact, except that it promotes use of the euro in the invoicing of exports, but only among euro area countries.

The rising role of the renminbi

While the euro has long been seen as the only potential challenger to the dollar, the rising economic weight of China has opened the possibility that the renminbi could become another challenger. We assess this using a smaller sample of countries (not including China itself) for which we have information on the use of the renminbi in addition to the dollar and the euro.

The use of the renminbi remains quite limited, but it is growing. The left panel of figure 1 shows the number of countries for which data on renminbi invoicing are available. The right panel depicts the share of trade invoiced in renminbi in countries that use it to some extent, including the median (thick lines) and 75th percentile (thin lines). We clearly see that the Chinese currency is not yet a sizable competitor to the other currencies, being used only in a small share of trade. Nonetheless, there are outliers with a larger share of renminbi invoicing, and the trend is clearly positive.

Source: Georgiadis et al. (2021). Notes: The left panel sows the number of countries with data on renminbi invoicing. The right panel shows the share of exports and imports invoiced in renminbi, with the median (thick lines) and the 75th percentile (thin lines).

Our analysis indicates that the rising role of the renminbi in part reflects the same economic fundamentals considered for the euro and the dollar, albeit in a very heterogeneous way. Overall, higher trade with China is associated with more dollar use at the expense of the euro. Focusing on specific regions shows a differentiated pattern. Among European countries, a higher share of imports from China leads to more euro use at the expense of the dollar. By contrast, countries in South-East Asia and Oceania make more use of the dollar, at the expense of the euro, when they trade more with China. Fundamentals, however, have little impact on the use of the renminbi, except for trade of Oceania countries with China .

While European officials argued until recently that the international role of the euro is essentially driven by market forces, Chinese counterparts have taken a more active role. Specifically, the People’s Bank of China (PBoC) has established currency swap lines with central banks in other countries to facilitate payment in renminbi and promotes its use in international trade. Bahaj and Reis (2020) show that policies that reduce financial transaction costs through the establishment of swap lines can in theory lead to a higher use of the corresponding currency in international trade invoicing.

We indeed document that swaps lines have been associated with greater use of the renminbi in international trade invoicing. Figure 2 shows the share of renminbi in the invoicing of exports and imports, contrasting the countries that have set up a swap line with the PBoC at some point (left panel) with those that have nott (right panel). We clearly observe a higher renminbi use in the former group.

Source: Georgiadis et al. (2021). Notes: The figure shows the median share of renminbi invoicing in countries that have established a swap line with the PBoC (left panel) and the ones that did not (right panel).

Looking more closely at the data, we find that the swap lines are associated with more use in the renminbi only in countries for which China is a sizable trading partner. Figure 3 shows the effect of having a swap line on renminbi invoicing depending on the share of exports that go to China (the pattern is similar for imports). While setting up a swap line with a country that does not trade much with China lowers the use of renminbi slightly, the effect becomes less negative and turns positive for countries where a higher share of exports are destined for China. 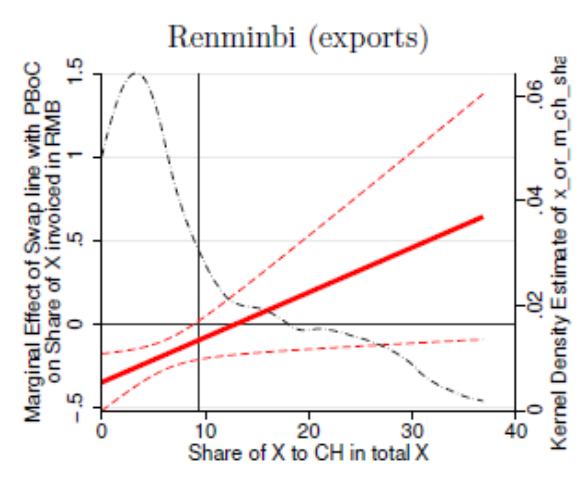 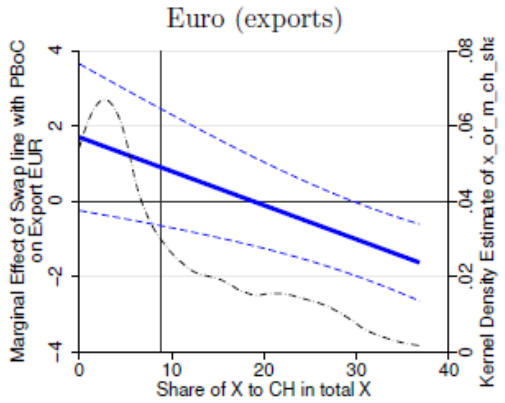 Source: Georgiadis et al. (2021). Notes: The figure shows the marginal effect of a PBoC swap line on renminbi invoicing depending on the share of a country’s exports going to China. The solid line indicates the point estimate and the dashed line the 90% confidence interval. The blue dashed line is the kernel density estimate of the distribution of the share of exports going to China.

In which competitor currency’s share is the additional use of the renminbi mirrored? Figure 4 shows the impact on dollar (left panel) and euro (right panel) invoicing  constructed along the same lines as figure 3. The higher renminbi use comes at the expense of the dollar, for which the effect is negative regardless of the extent to which a country trades with China. Invoicing euro is also reduced, but only in countries that trade a lot with China. In addition, the magnitude of the effect on the euro remains much smaller than the impact on the dollar.

Figure 4: Impact of swap line on dollar and euro invoicing 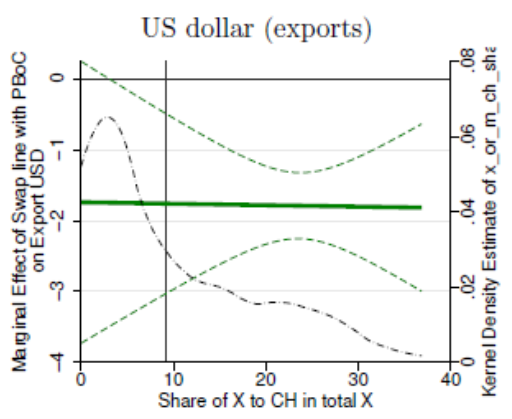 Source: Georgiadis et al. (2021). Notes: The figure shows the marginal effect of a PBoC swap line on dollar invoicing (left panel) and euro invoicing (right panel) depending on the share of a country’s exports going to China. The solid line indicates the point estimate and the dashed line the 90% confidence interval. The blue dashed line is the kernel density estimate of the distribution of the share of exports going to China.

The rising invoicing role of the renminbi reflects economic fundamentals, albeit only on a regional basis, and the PBoC policy of establishing swap lines to promote the use of its currency. Our analysis reveals that the specific currency whose use is reduced depends on the invoicing driver considered. Economic fundamentals show that China’s integration in world trade has benefited the dollar and the renminbi (to some extent) at the expense of the euro, and therefore reinforced the dominance of the dollar. In sharp contrast, the establishment of swap lines has raised the use of the renminbi at the expense of the dollar, with a much more moderate impact on the euro.

36 thoughts on “Guest Contribution: “Is policy effective at promoting the international role of the renminbi?””