From Blanchflower and Bryson:

It seems to us that there is every likelihood that the US is entered recession at the end of 2021. The most compelling evidence is from the Conference Board expectations data for the eight biggest states.

Economic shocks are notoriously difficult to predict but recent research suggests qualitative metrics about economic actors’ expectations are predictive of downturns. We show consumer expectations indices from both the Conference Board and the University of Michigan predict economic downturns up to 18 months in advance in the United States, both at national and at state-level. All the recessions since the 1980s have been predicted by at least 10 and sometimes many more point drops in these expectations indices. A single monthly rise of at least 0.3 percentage points in the unemployment rate also predicts recession, as does two consecutive months of employment rate declines. The economic situation in 2021 is exceptional, however, since unprecedented direct government intervention in the labor market through furlough-type arrangements has enabled employment rates to recover quickly from the huge downturn in 2020. However, downward movements in consumer expectations in the last six months suggest the economy in the United States is entering recession now (Autumn 2021) even though employment and wage growth figures suggest otherwise.

The figure below combines Blanchflower and Bryson’s Chart 2 (on top) with my plot (over the same sample period) of the 10yr-3mo term spread and spread adjusted by the NY Fed’s 10 year term premium (at bottom). 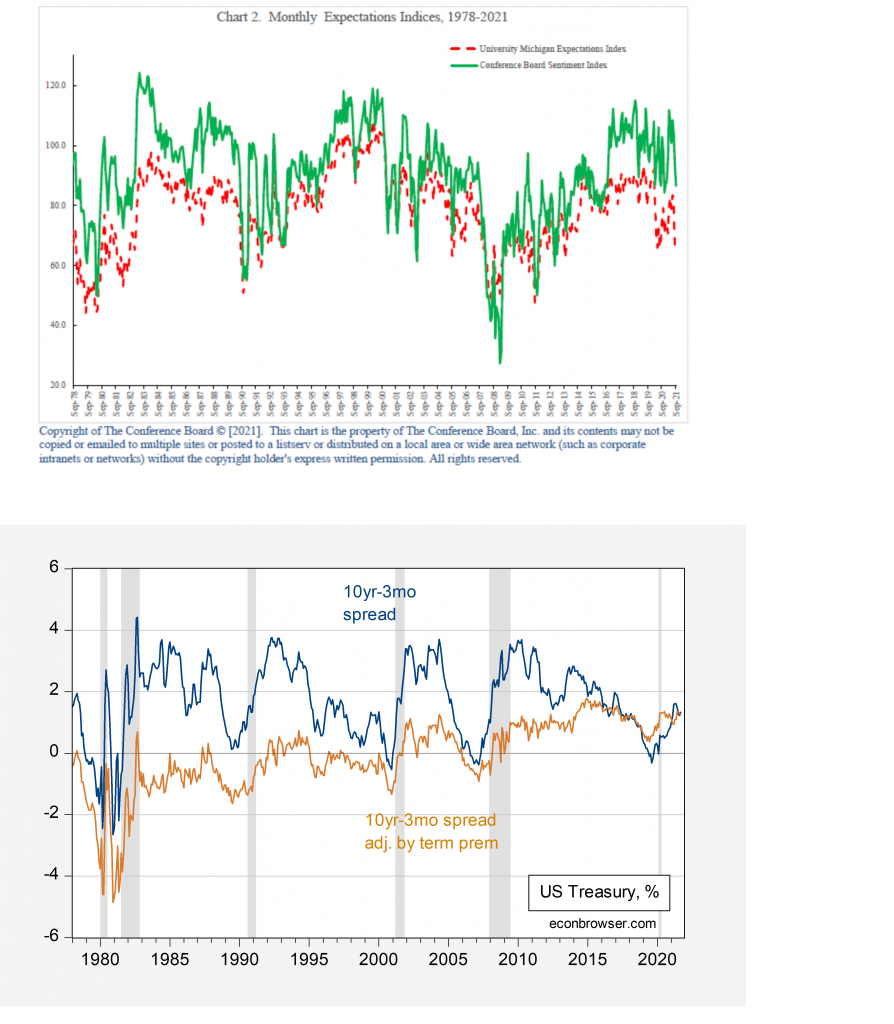 There is indeed a sharp drop in the two sentiment indexes. On the other hand, the term spread does not signal an incipient recession. To formalize this point, let’s examine the predictions of each indicator, individually and combined, using a 12 month horizon, over the 1978-2019 period (so excludes recession information for 2020). I only test the Michigan sentiment index as I don’t have access to the time series for the Conference Board measure.

For predictions of recessions, one can see the comparative performance in Figure 2. 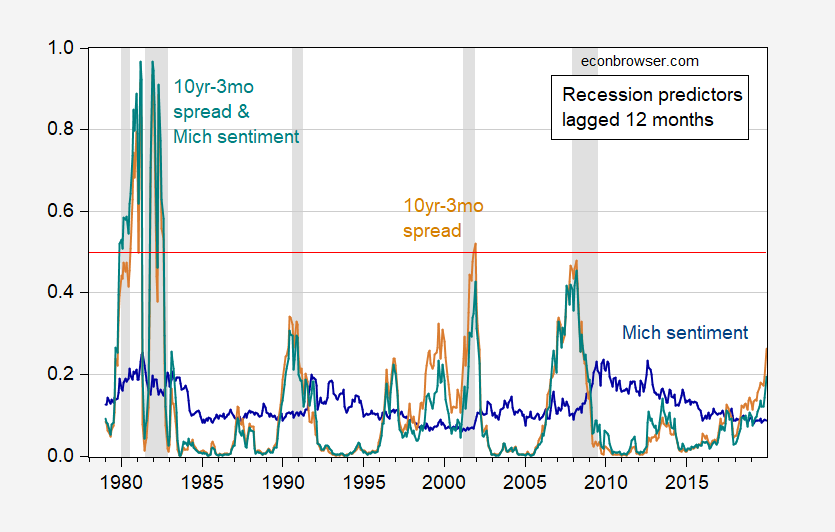 The Michigan sentiment indicator certainly covaries and precedes recession dates, although the probit model does not do a particularly good job at detecting big changes in probability (average is about 10%, rising to about 20% at actual recession times). Note that Blanchflower and Bryson focus in on big changes of 10 percentage points are more, pointing to a nonlinearity I’ve not incorporated (although I did try changes in sentiment as an indicator, yielding similarly lackluster results.)

Note that the term spread does a better job, but not altogether great. The candidate reasons for this result are manifold, as discussed most recently in this post. Using both variables improves the fit slightly, but does not yield a specification that is appreciably better at predicting recessions.

As for whether we’ve already entered into recession, I’m agnostic. My recollection of a discussion between myself and another CEA person in April 2001 was that we were assuredly not in a recession at that time. Of course, we only had data up to February, maybe a bit of March; and all that data was subsequently revised. NBER eventually dated the peak at March 2001. However, to the extent we have high frequency indicators we didn’t have back then, it doesn’t appear we were in a recession as of early-mid October.

108 thoughts on “Recession before the Leaves Fall?”