One criticism of the use of the term spread model to forecast recession in current times is that this time is different. [1] [2] [3] In particular, due to quantitative easing, the term premium is lower than in past episodes. Hence, in this interpretation, an inverted yield curve no longer signals as much future depressed interest rates as in the past.

To see this, consider this decomposition. The long yield is the sum of two components: (i) EHTS, expectations hypothesis of the term structure, and (ii) tp, the term premium (Benzoni et al. (2018) further decompose the term premium.) The first component is the relevant one for predicting the business cycle. A long rate is the average of the expected short rates, so a EHTS component lower than the current short rate means expected rates are lower than the current rate. However, the EHTS component is not directly observable, so this is not a directly testable proposition.

We can adjust the term spread by the term premium. There are several estimates of the term premium (we assume the 3 month is zero). The resulting 10yr-3mo adjusted spreads are depicted below. 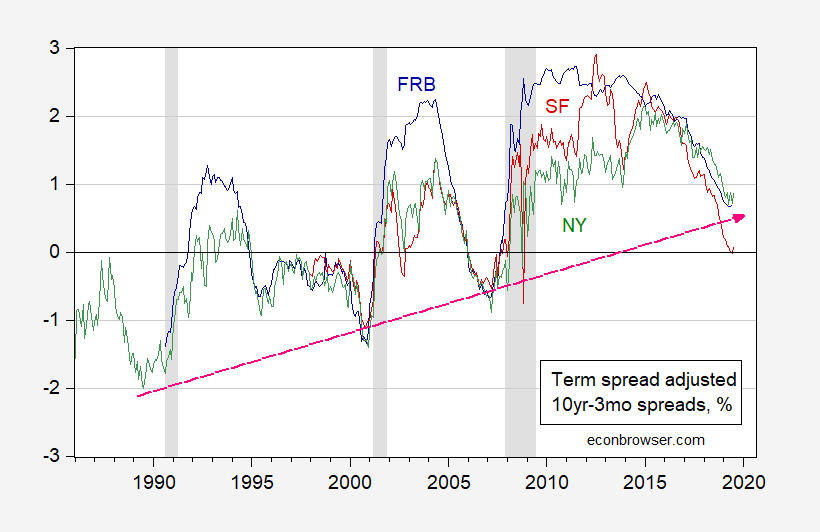 Take the spread estimated by subtracting off the NY Fed’s estimate of the term premium (this is the longest spanning series). Estimating a probit regression on the adjusted spread over the 1986-2019M08 period leads to a miniscule estimate of recession probability for July 2020 (2%).

Notice that the inversion of the adjusted spread that is associated with the subsequent recession becomes less and less pronounced over time (as shown by the pink dashed arrow). One can account for this effect by including a linear time trend. This leads to the following estimated regression: 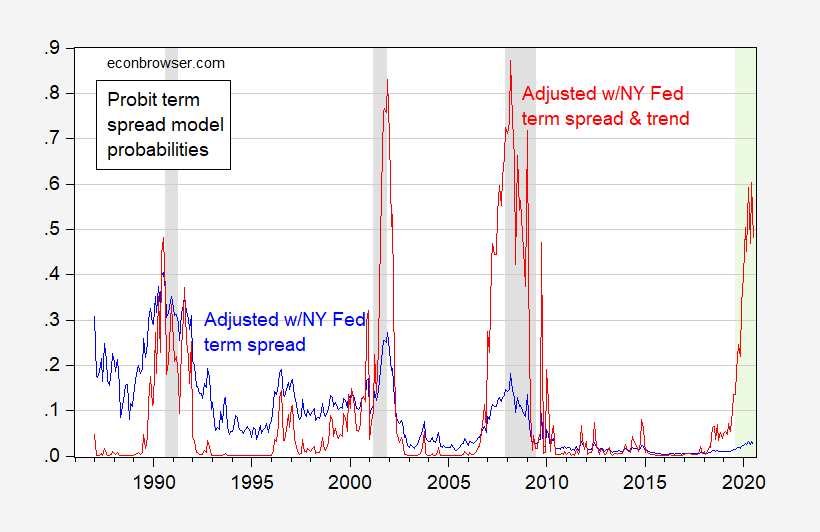 The probability of recession in June/July 2020 would average 54% under this specification.

Note that if one uses the SF Fed estimate of the term premium, as noted in this post, the probability of recession in July 2020 is 20% (no time trend).

For more on unadjusted term spread based-estimates, see this post. The procedure is based on Chinn Kucko (2015).