The gap between the market valuation of the net international investment position (NIIP) and the cumulative current account has waxed and waned over the years (see the discussion in this post). Some of this effect is due to the dollar’s value. Does the same hold true for net primary income (investment and wage income)?

First, lets look at the valuation effect proxied by the gap between NIIP and cumulative current account (both as a share of GDP). 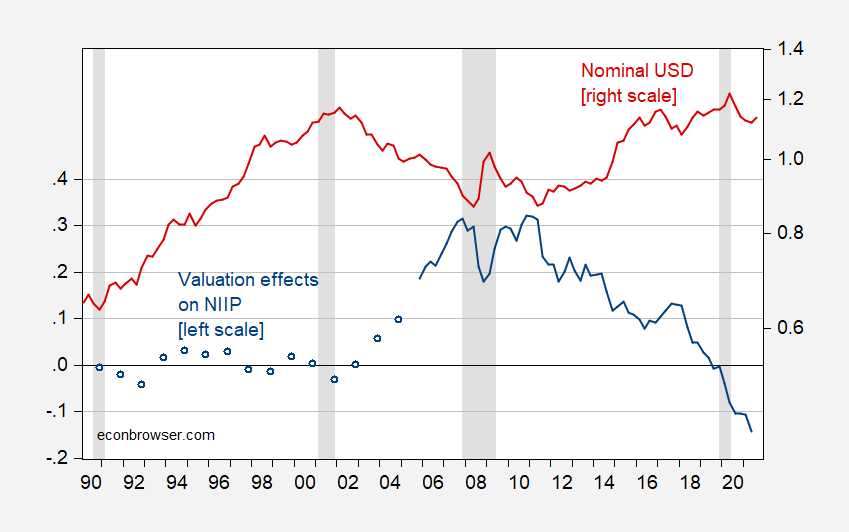 Next, what about for net primary income? Here’s the corresponding graph: 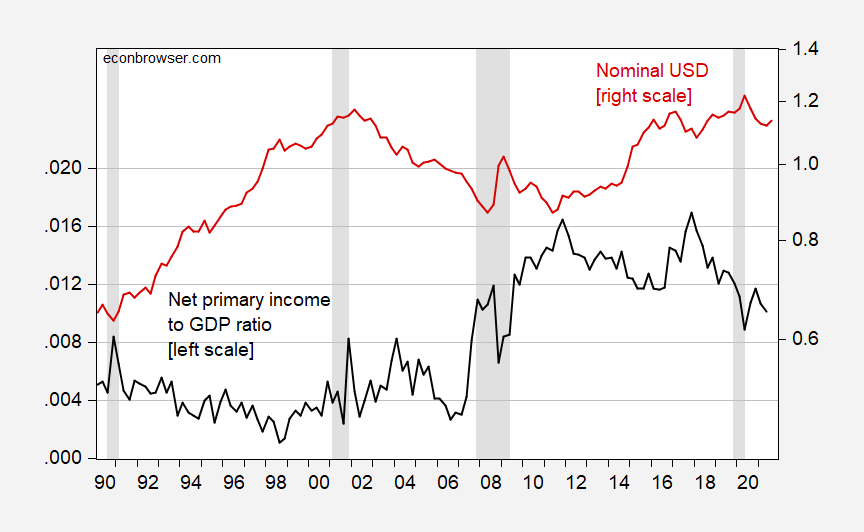 There is some apparent correlation. However, exchange rate changes affect receipts and payments in different ways (in an accounting sense). Since the flows are denominated in dollars, payments are not converted from one currency to another in the tabulation, while receipts are. One might want then conjecture a bigger (accounting) effect on receipts than payments. This is not apparent. 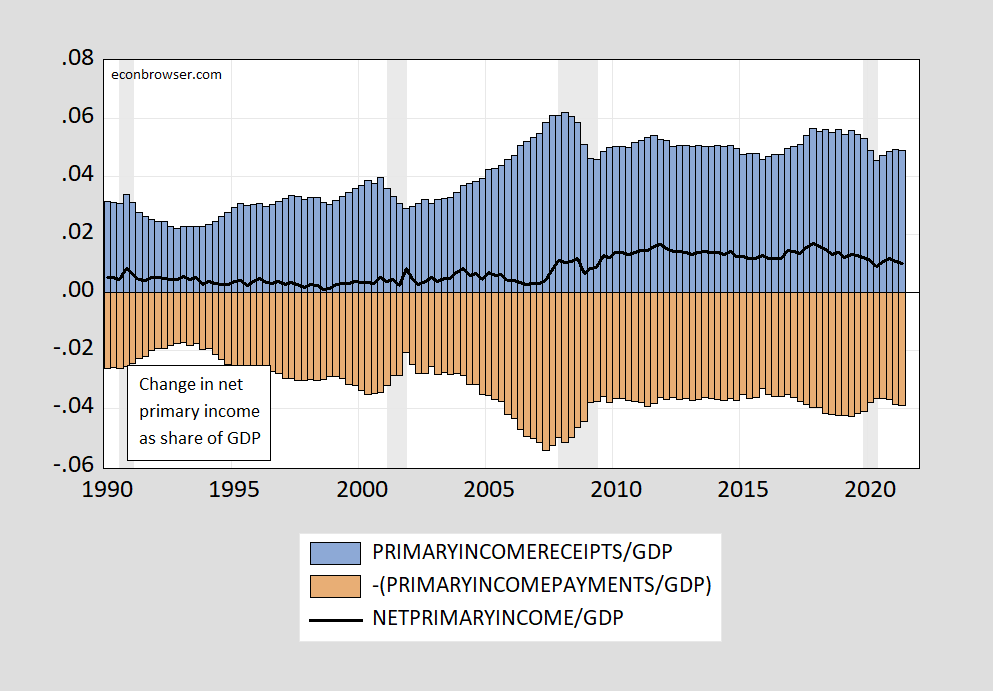 What of the income balance. It too can be decomposed into the balance on FDI and interest (for simplicity, I have not tried to pull dividend payments on portfolio holdings out of the non-FDI data. These payments are small and we don’t yet have 2007 data, so this is not a major source of error)

First, FDI receipts are much larger than FDI payments. It you plot the implied rate of return on US investment abroad v the implied return on FDI in the US, this stems from the very low reported return on foreign investment in the US. Almost all of the difference reflects different reported rates of reinvested earnings, not actual cash payments. I still that reflects tax arbitrage more than anything else – foreign FDI hasn’t consistently produced lower returns than holding treasuries, as the US data implies.

Two, directionally, though the FDI balance has improved a lot both because of stronger US returns abroad and weak foreign returns in the US. The sharp fall in FDI payments on direct investment in the US suggests the US is in recession.

Three, interest payments have increased sharply – rising to around 4% of US GDP. But so too have interest receipts. That reflects the growth in both US borrowing and lending – whether from true financial globalization or the growing use of London and other offshore financial centers by the “shadow banking system.” Carlyle Capital (which recently failed) used a London entity to borrow dollars to buy US mortgage backed securities.

Four, the increase in both interest payments and receipts has stopped and is now heading down. Most US lending and borrowing is denominated in dollars and fairly short-term. The fall consequently reflects the fall in US rates.

The net balance on FDI improved sharply – mostly because of the fall in payments on FDI in the US. And – -more surprisingly – at least to me, the income balance stopped deteriorating. It actually got better over the course of 2007. Falling rates helped. But there is a bit more going as well. I had expected in late 2006 the interest rate on US borrowing abroad to rise relative to the interest rate on US lending as long-term rates caught up with rising short-term rates. Historically the US pays more on its borrowing than it gets on its lending (likely because of the term premium). The opposite though happened.

The impact (or not) of exchange rate changes can also be inferred by decomposing the change in net income as a share of GDP. 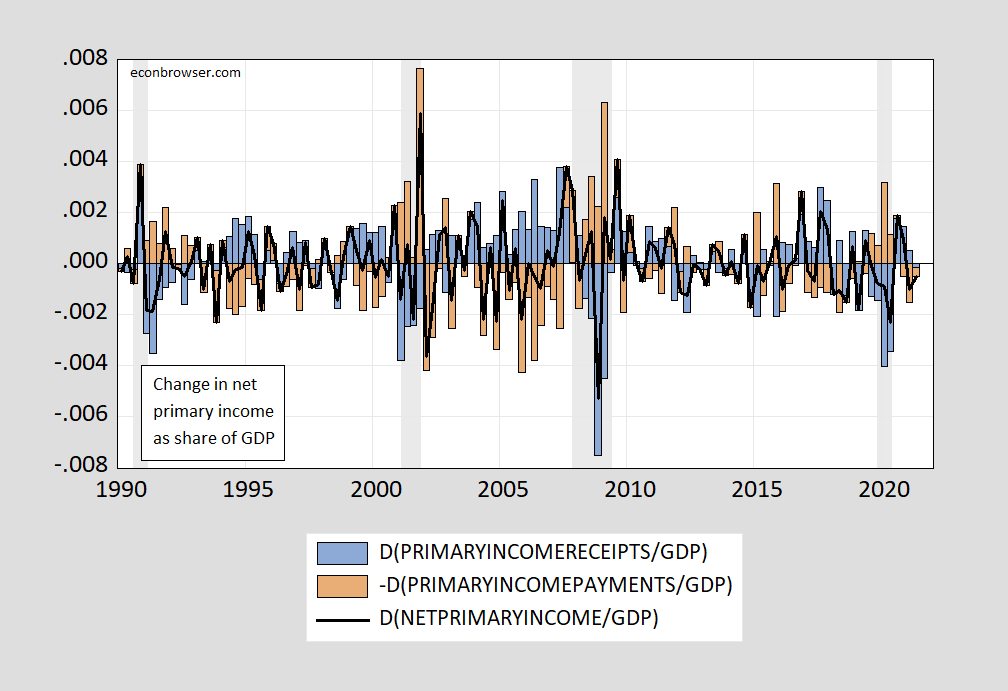 Increase in receipts push up net income, but decrease in payments also do, in 2007. Of course, this is a mechanical decomposition – it’s possible the dollar depreciation induced economic affects both receipts and payments (and likely did).

A digression: It’s interesting that the valuation effect continues in a negative direction despite the depreciation of the dollar since mid-2020.

35 thoughts on “Valuation Effects on NIIP and Net Primary Income”