From the conclusion to NBER WP No 29687  (paper), coauthored with Caroline Jardet and Cristina Jude (both Banque de France):

FDI flows have been particularly weak in the years preceding the pandemic, while traditional drivers like growth or historically low interest rates should have been supportive of a stronger dynamic. This suggests that structural factors beyond those usually found to drive FDI inflows, such as the increased economic uncertainty in the aftermath of the GFC, may have deterred FDI inflows. While there is an enormous extant literature analyzing the empirical determinants FDI, the empirical analysis of uncertainty’s impact is relatively small, partly explained by the lack of consistent cross-country measures of policy uncertainty.

In this paper, we examine the role of uncertainty in driving FDI inflows in a heterogeneous sample of advanced, emerging market and developing countries over a 25 year long pre-Covid period sample from 1995 to 2019. By relying on a push-pull framework, we control for both host country as well as global uncertainty. Stratifying the sample according the development levels allows us to discern effect of different strength and directions among the country groups.

For emerging countries, and in certain conditions, host countries uncertainty seems to also have a negative effect on FDI flows, but to a lesser extent compared to global uncertainty. Domestic uncertainty does not seem to be an important driver of FDI inflows in advanced or developing economies.

Finally, our results suggest that higher financial openness reinforces the negative impact of global uncertainty, which also corroborates the fact that the most affected flows are actually the cross border mergers and acquisitions and not greenfield FDI.

The results are based on a panel data set, but one key finding is illustrated by this time series plot. 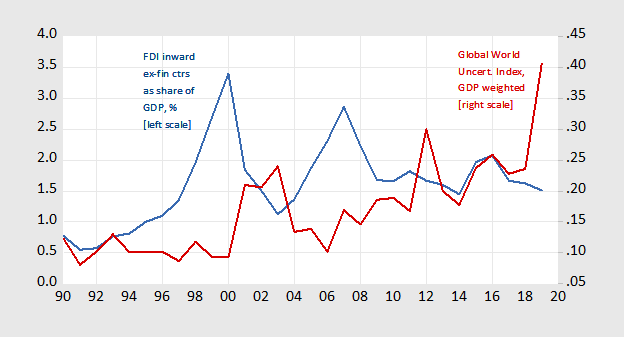 What’s one real-world implication? In our baseline specification:

Using the group-specific point estimates, we can consider what FDI inflows would have been had the level of global uncertainty from 2015 to 2019 been at 2014 levels (that is 0.18 instead of 0.41).

Our estimates imply a large impact on FDI inflows, perhaps unsurprisingly because of the large postulated change in global uncertainty levels. FDI inflows rise by about a percentage point of GDP for emerging market economies, and by about 1.5 percentage points for advanced economies.

The ungated version of the paper is here.