I see constant references to labor shortages in the Wisconsin economy (e.g, [1]). I think it’s important to understand the word “shortage” is not being used in the sense that a neoclassically trained economist would use the term.

A “labor shortage” as we teach in the introductory micro course Econ 101 at UW Madison would show up as: 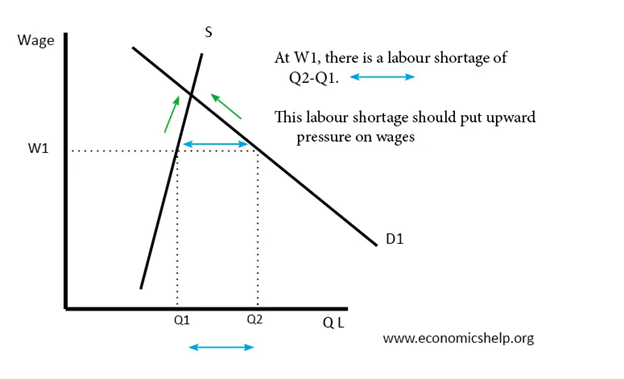 Now, to my knowledge, Wisconsin has not implemented a ceiling on wages that can be paid (such as denoted by wage W1), so there is no Classical shortage. And the floor (the Federal minimum wage) is not binding, so we don’t have a Classical unemployment. So what is meant by the term “shortage”?

Rather, what proponents of the labor shortage argument are saying is that the labor supply curve of households is “too high”, and that either (1) benefits being paid to the unemployed are elevating the reservation wage of workers, or (2) workers are having a distorted view of the dangers of working in a world where a lot of people are still unvaccinated and the delta variant is spreading quickly, or (3) preferences have changed relative to working situations (see a run-down here). Looking at this quote reifies this point.

The fierce competition for talent won’t end soon, and employers across industries must adapt to survive the statewide worker shortage, northeastern Wisconsin workforce experts said. Until then, residents must continue to live with the impacts of a tight labor market: Store and restaurant closures, supply shortages and longer wait times.

Thousands of jobs are going unfilled due to longstanding demographic trends and workers’ changing expectations about benefits, pay, hours and workplace culture.

I think the term “availability” would better serve the debate than “shortage”, as there’s no regulatory barrier to wages being raised by the private sector. The process of “fierce recruitment” outlined above is then part of the adjustment process to a new equilibrium in a supply-demand framework if we are taking the definition of shortage literally.

Now, in a neoclassical framework, if there is a constraint on labor supply (which more accords with business complaints), then we should see real wages rising. Using an (utterly conventional) supply-demand graph: 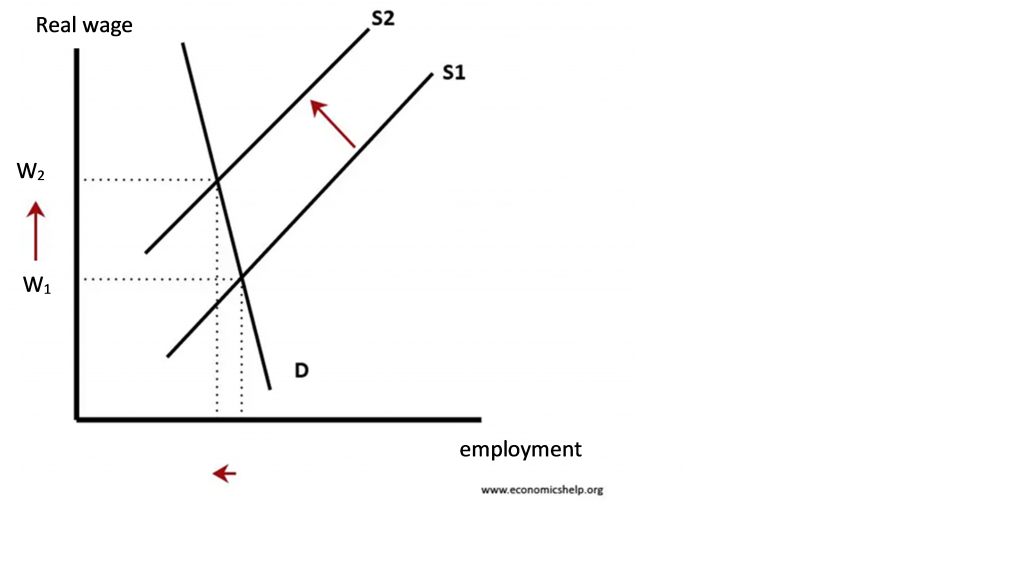 Against a backdrop of lower Wisconsin private nonfarm employment (down 2.5% relative to December 2019), what have real wages actually done, then? We only have data in Wisconsin through December, but using those data, and the nationwide CPI, we have the following picture. 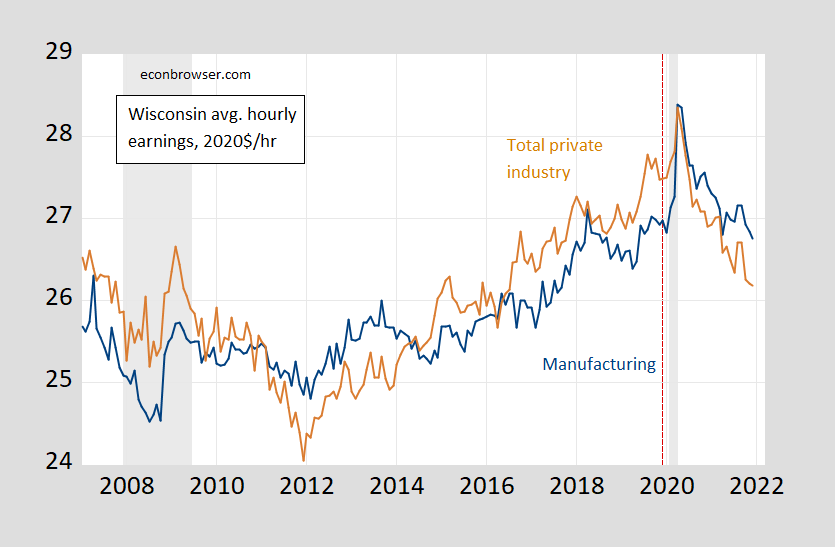 Real wages so measured are down 5% (total private nonfarm) and 0.8% (manufacturing). That decline is more consistent with lower demand, rather than lower supply.

Now, one could use a different, more sophisticated model — after all, labor is not just like any old commodity. Still, if one were to use for instance a search model (and there are different types with very different outcomes), one would want to see if those models predicted what we have seen in wages (as well as openings, separations, etc.). CROWE has an analysis (October 2021) that looks at some of these types of indicators (notably, the brief doesn’t contain the word “shortage”).