Today, we are pleased to present a guest contribution written by Nelson Mark, Alfred C. DeCrane Jr. Professor of Economics (U. Notre Dame).

A central problem addressed in climate change economics is the estimation of economic costs of climate change. Because climate is a slowly evolving phenomenon, not well suited to econometric analysis, empirical economists use weather (e.g., temperature and precipitation) to proxy for climate. Empirical research has used international temperature and per capita GDP data in panel regressions of a country’s GDP growth on country temperature. A coarse consensus is that higher temperature economically damages hot and not-so-rich countries but there is no (statistically significant) effect on cooler and rich countries.

The absence of effect on the rich countries could be viewed as a problem. Industrialized countries are the primary contributors to the current stock of greenhouse gasses but if they don’t bear economic costs, what incentive do they have to invest in climate mitigation? Nicholas Stern appeals to ethical considerations to get action from rich countries. First, rich countries, through mechanized production since the industrial revolution, have largely created the problem, and second, poor countries are just beginning to overcome poverty through rapid growth and should not be forced to slow.

These panel regressions discussed above, constrain the GDP growth response coefficient to higher temperatures to be equal across countries although a limited analysis of differences across countries (i.e., rich versus poor) can be done through the use of dummy variables.

Instead, if one estimates the GDP response to a (positive) temperature shock individually for each country, one finds a lot of heterogeneity in response. This figure shows the impulse response of a country’s log per capita GDP to a one-degree Celsius increase in temperature at horizons of 0 to 7 years after the shock.  Some poor and hot countries are hurt by higher temperature while others, surprisingly, seem to have benefitted. Rich countries are more likely to be hurt. Per capita GDP in 6 of the G-7 countries show declines following a temperature shock.

To get a more comprehensive view of cross-country differences in responses, the top panel of the map figure shows the contemporaneous GDP response and the bottom figure shows the 7-year ahead response to a temperature shock. Positive responses are green, negative responses are red. Darker shades indicate statistical significance at the 5 percent level. In the bottom panel, higher temperature, has been good for very cold countries (Canada, Greenland, Russian Federation). This makes sense because lessening the extreme cold of those countries can extend growing and construction seasons, and improve production efficiency in general. Oddly, positive temperature shocks have been good for China, India, Brazil, and several African countries. 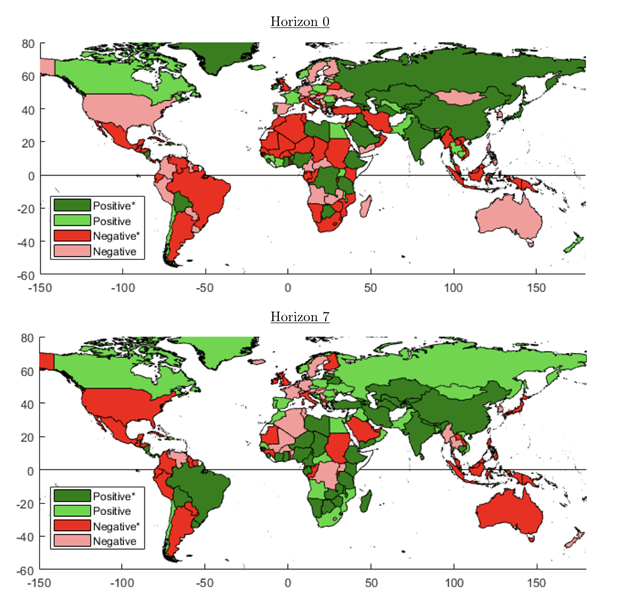 To characterize these response patterns in a more systematic way, let’s run a cross-sectional  regression of the horizon 7 country response coefficient on country characteristics: latitude, per capita GDP, long-run growth, and the relative importance of agriculture, industry and manufacturing. No need to dwell on the actual numbers—I’ll just indicate the coefficient sign and whether it is statistically significant (with a *)

After controlling for latitude richer and faster growing countries are hurt by higher temperature. Countries with a larger manufacturing sector are also damaged by temperature. These results align with the evidence that heat lowers labor productivity and labor supply in manufacturing.

Curiously, countries where agriculture plays a larger economic role are more likely to have benefited from rising temperature. This seems to go against the conventional wisdom whereby agricultural labor should be the most directly exposed to hot temperatures and where crop yields should be damaged by heat. It is, however, consistent with the inverse relation between response and income, since poor countries have larger agricultural sectors.

GDP of countries with a larger industrial share (manufacturing, mining, construction, electricity, water, and gas) have benefitted, possibly because warmer weather extends the number of operational days in construction and mining.

There seems to be substantial heterogeneity across countries in the way temperature impacts GDP. Temperature shocks have resulted in significant economic damage to rich countries. They should be incentivized to invest in abatement policies out of self-interest.