Today, we are fortunate to present a guest contribution written by Laurent Ferrara (Professor of International Economics, SKEMA Business School, Paris, and Chair of the French Business Cycle Dating Committee).

After a robust second half of the year in 2021, economic activity in France stagnated in 2022q1. We review here the factors behind this sharp slowdown in economic activity and discuss the possible risks of future recession.

On 29 April 2022, Eurostat published preliminary flash estimate GDP data for the first quarter of 2022 for the euro area as a whole: the quarter-over-quarter growth was 0.2%, that is about 0.8% in annualized terms to be comparable with U.S. standards (see this Econbrowser post for an analysis of U.S. GDP). This figure hides large heterogeneity within the zone: +2.6% in Portugal vs -0.2% in Italy. A striking figure is the null growth rate for France, coming after a buoyant economic growth in 2021 (+1.5% in 2021q2, +3% in 2021q3 and +0.8% in 2021q4). After few months of rather flat economic activity just after the exit of the Covid recession (in 2020q2), the French economy was indeed recovering quite rapidly in 2021, displaying an annual GDP growth of 7% (see Figure 1).

Figure 1. French GDP and recessions since 2000 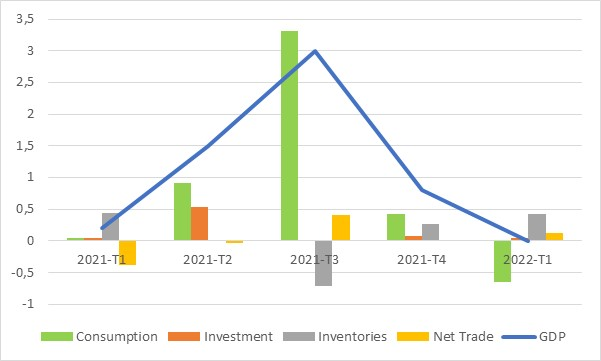 What are the possible explanations of this negative evolution in household consumption for 2022q1?  A first explanation is obviously the sharp increase in commodity prices, in particular oil and gas, leading in turn to an increase in consumer prices. A strong global demand associated with supply constraints initially generated a sharp increase in inflation starting with the exit of the Covid recession. On top of that, Russia’s invasion of Ukraine starting from 24 February 2022 added another layer of upward pressures on consumer prices, making inflation in France was 4.8% in April 2022.  So the loss of household purchasing power related to increasing consumption prices can be viewed as a first explanation. However, we cannot rule out the fact that we are currently seeing a normalization in the consumption behavior of households after months of sustained expenses, especially in services such as restaurants, hotels or transportation. It turns out that after the Covid recession, French households had an excess saving of about 166 billion euros (12% of annual income) which was likely used to boost consumption in 2021.

Last, increasing uncertainties during the first months of 2022 also led to a wait-and-see attitude for consumers, in particular for big tickets items, and to precautionary savings. I refer here to at least two types of uncertainty: (i) the uncertainty driven by the war in Ukraine, perceived as a shock by public opinion, and (ii) the political uncertainty that prevailed before the French Presidential election that took place on April 24.

One question that is currently debated in France is to know whether the French economy is heading towards a recession. Recession phases are generally identified by economists using the “3Ds” rule that simultaneously assesses Duration, Depth and Diffusion of the phenomenon. So far, we have only seen one quarter of null GDP growth, meaning that the “Duration” criterion (at least two consecutive quarters) has not yet been met. The “Depth” criterion means that a recession translates into a significant decline in economic activity. It turns out that periods with slightly negative GDP growth are likely to be not considered as a full recession, but only as an economic slowdown. For example, that was the case in France for the 2002-03 period after the burst of the Internet bubble and in 2012-13 during the sovereign debt crisis in euro area (see this working paper). Last the “Diffusion” criterion means that a recession has to be visible in various economic variables at the same time (i.e. we should observe a strong co-movement). In this respect, beyond GDP, the French business cycle dating committee focuses on employment, business investment, hours worked and capacity utilization rate. So far, those variables do not show any evidence of a large drop in economic activity. Strikingly, household consumption is not part of this list, as this variable is too volatile and does not exhibit characteristics in line with the business cycle.

In sum, as of today, the French economy seems to be quite far from being in recession, though it is much too early to say definitively. Indeed, identifying a recession needs more data and more time. For example, the average delay between the start of a U.S. recession and its recognition by the NBER dating committee is about 7 months.

However, it is fair to acknowledge that some downside risks are currently weighing on French economic activity. First and foremost, the Russia’s invasion of Ukraine means that today macroeconomic risks in the euro area as a whole are now three times higher than in the U.S. (see this post). The most important channel of transmission is the sharp increase in commodity prices, mainly oil and gas, leading to a loss of purchasing power for French households. In addition, the Russian government threatens to cut European countries’ access to its gas, as it did for Poland and Bulgaria, and the European Union is currently debating the possibility of an embargo on Russian oil, leading to expectations of higher energy prices and eventually consumer prices. At some point, the ECB will have to tighten its monetary policy, just as the U.S. Federal Reserve and the Bank of England did, thus jeopardizing the economic activity.

Second, political uncertainty has not been fully resolved, as we will have two rounds of legislative elections on 12 and 19 June 2022 in order to elect the 577 members of the French Parliament. If the recently elected President, Emmanuel Macron, is not able to secure a majority, he will have to nominate a Prime Minister with a different political sensitivity, thus generating uncertainty as regards the political objectives of the next presidential mandate.

Third, the global economy is losing momentum due to the combined effects of the war in Ukraine, higher commodity prices, strict lockdowns in China, increasing central bank interest rates … World GDP growth has been revised down to 3.6% in 2022 according the April IMF World Economic Outlook. This means that France cannot rely on exports to sustain economic growth.

To conclude, the behavior of French households definitely has to be closely monitored in upcoming months. As a preview, we can look at the last opinion survey carried out in April by the French Statistical Institute (Insee) by households (see Figure 3). We note that saving intentions for the next 12 months stay at a high level, while major purchases intentions for the next 12 months dropped in April to levels consistent with past periods of economic stress. This increasing spread between the two components of the survey is clearly not a positive signal for future consumption. However, as I mentioned earlier, variables that would definitively help to characterize the occurrence of a recession in France, in addition to GDP, are employment, investment, hours worked and capacity utilization rate. Those variables have to be closely monitored in the upcoming months. 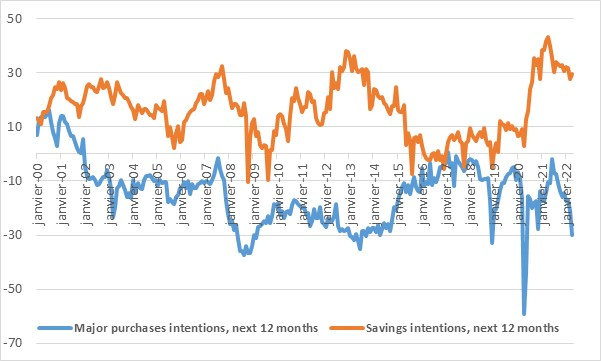