The simple sum of the unemployment rate and the (y/y) inflation rate: 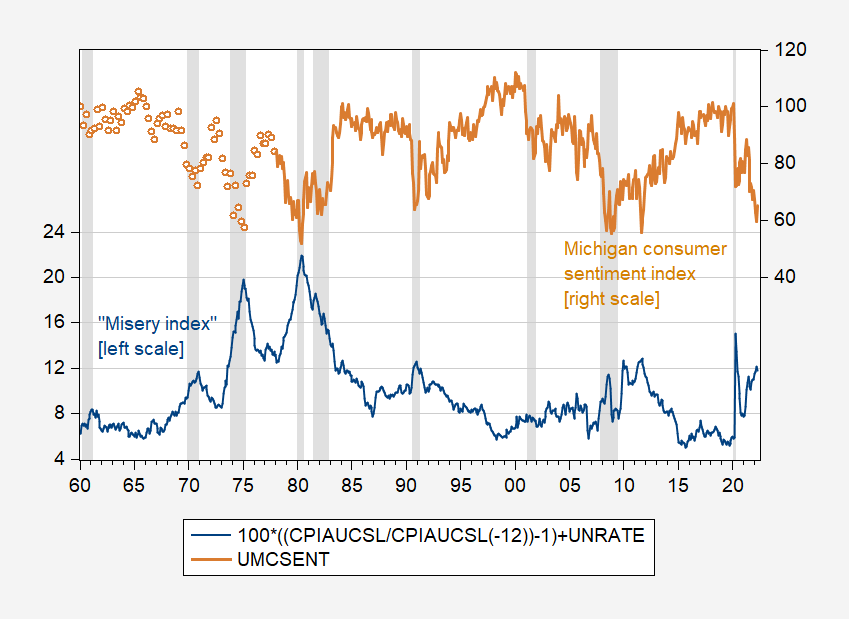 There’s no particular reason to give equal weight to inflation and unemployment; rather Arthur Okun suggested this particular composite (which he called a “discomfort index”) as a way of conveying an idea in a simple way (see Cohen, et al. 2014 for history). Jimmy Carter subsequently cited this measure as an index of “economic misery”.

How is this related to measures of how people actually describe their discomfort? One popular measure of economic satisfaction is the University of Michigan Index of Consumer Sentiment (shown as the brown line in Figure 1). This index is clearly inversely related to the misery index:

There is no particular reason why one should weight unemployment and inflation equally.

While the INFLATION and UNRATE coefficients do not look particularly different, a Wald test rejects equality at very high levels of significance.

Several interesting aspects to the relationship between the misery index and consumer sentiment.

Second, relatedly, importance of unemployment and inflation change over time, both in terms of the slope coefficients, and in terms of standardized beta coefficients. In the latest two years, inflation looms larger.

As an aside, both the Michigan consumer sentiment index (in levels) and the misery index are lousy predictors of recession 12 months ahead (over the 1986-2022 period).

36 thoughts on “Sixty Years of the “Misery Index””