The cumulative growth gap since January 2011 between the US and Wisconsin coincident indices was 2.2% in December. The forecast indicates a continued widening to 2.8% in six months time.

Figure 1 depicts the log coincident indices for Wisconsin and the US. 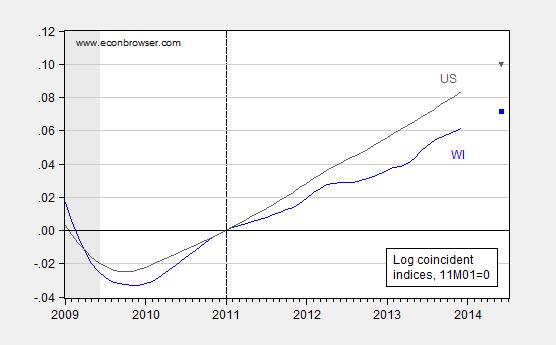 Reader Ed Hanson wonders about the predictive characteristics of the leading indices produced by the Philadelphia Fed. Figure 2 depicts the actual and forecasted six-month growth rates for Wisconsin. 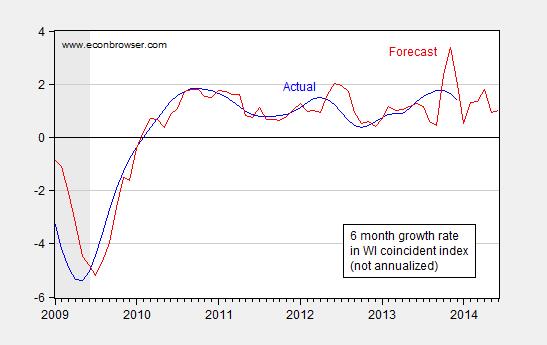 A regression of the actual six-month growth rate on the forecasted yields the following results: 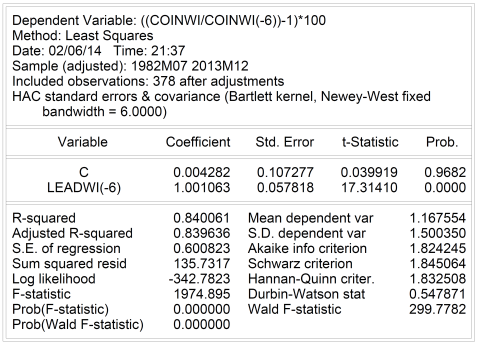 Note that the leading index appears to be an unbiased predictor of actual six-month growth rates, since the point estimate of the slope coefficient is 1.001, with a Newey-West robust standard error of 0.058; hence one would not reject a null hypothesis of a unit coefficient. The adjusted R2 is 0.84 — in other words 84% of the variation of the six-month growth rate around the mean is explained by the leading index. Note that this is not a “real time” analysis, as the coincident series are the revised, rather than initial, figures, and one might wish to compare the forecasts to the initial.

The leading index for the United States shares the same characteristics of unbiasedness; the adjusted-R2 is 0.93.

Has the behavior of the Wisconsin index changed over time? The log ratio (WI/US) rose from 1982 to a peak in 2000 before descending. Estimating the relationship between the (log) WI coincident index and the (log) US coincident index using dynamic OLS (6 leads and lags of the first differenced right hand side variable, 2001M01-13M12) and a dummy taking a value of one from 2011M01-2013M12 yields a cointegrating coefficient of 0.507, and the coefficient on the dummy is 0.021, significant at the .0002 level using Newey-West standard errors. Literally interpreted, Wisconsin economic activity is 2% lower than usual, starting from 2011M01.

This is not a conclusive finding; using a different specification, sample period, or estimation method would likely lead to a different finding.

Since Mr. Hanson is not persuaded by a coefficient on a dummy variable, I have undertaken another analysis, which conditions on US economic activity, and lagged WI economic activity. I estimate a error correction model over the 2001M01-2010M12 period: 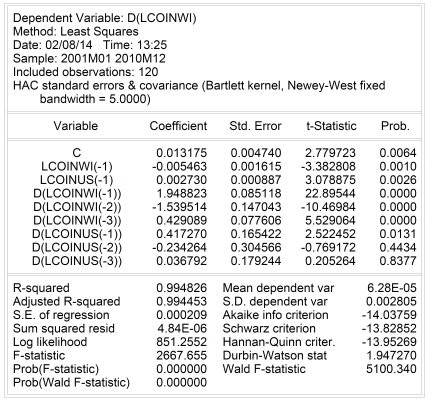 I use this error correction model to forecast out of sample (2011M01-2013M12), conditioning on actual US economic activity. The forecast is shown in Figure 3, with plus/minus two standard errors, compared against the actual. 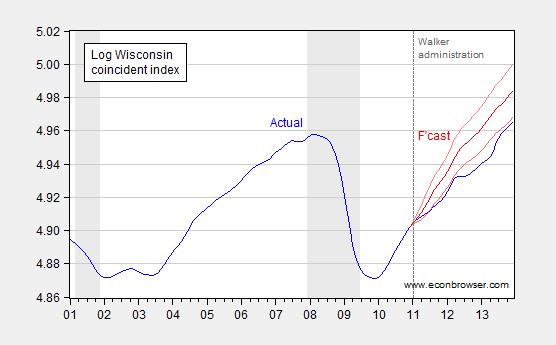 Notice that the actual Wisconsin index under-performs the forecasted (what we would call the counterfactual, if the usual economic relationship between the US and WI economies prevailed into 2013) by a significant amount — by up to 2.5% (log terms) earlier in 2013, and 1.9% as of 2013M12. The fact that the blue line (actual) is outside of the plus/minus two standard error bands suggests that the under-performance did not happen by accident, at conventional significance levels.