This is not the most erudite debate, but it pretty much sums up matters.

Reality check: Figure 1 below depicts the evolution of the nominal trade weighted dollar, inflation and Treasurys. 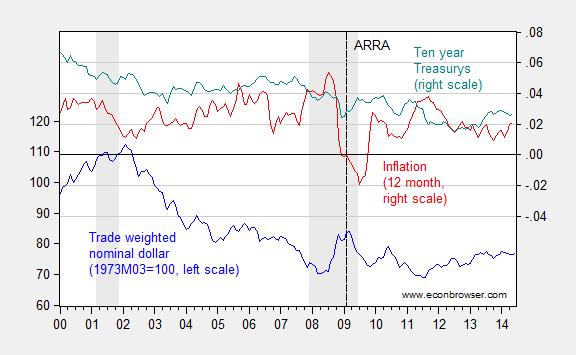 By my viewing, the dollar has not collapsed. It’s about 7.6% weaker than when quantitative easing began, while inflation and the interest rate are both lower. I think it incumbent on the Santelli’s of the world to explain the intellectual underpinnings for their Weltanschauung.

Update, 10:10AM Pacific: I see I am way behind the curve. Here is Paul Krugman‘s take on the Liesman-Santelli exchange.

I must confess, I did find it disconcerting when the traders applauded Santelli — not surprised — just sad.