As the U.S. economy returns to healthier growth, many of us expected long-term interest rates to return to more normal historical levels. But the general trend has been down since the end of the Great Recession. The 10-year rate did jump back up in the spring of 2013. But during most of this year it has been falling again. 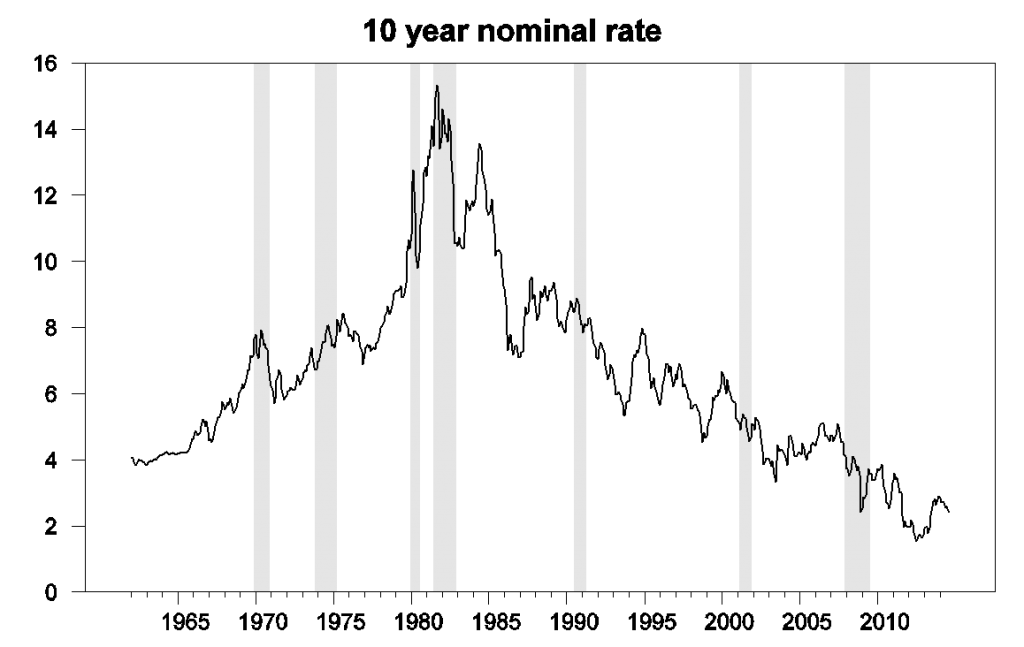 And it’s not just that people are getting used to the idea that inflation is always going to be low. The drop in the yield on a 10-year Treasury inflation-protected security (TIPS), whose coupon and par value go up with the headline CPI, has also been impressive. 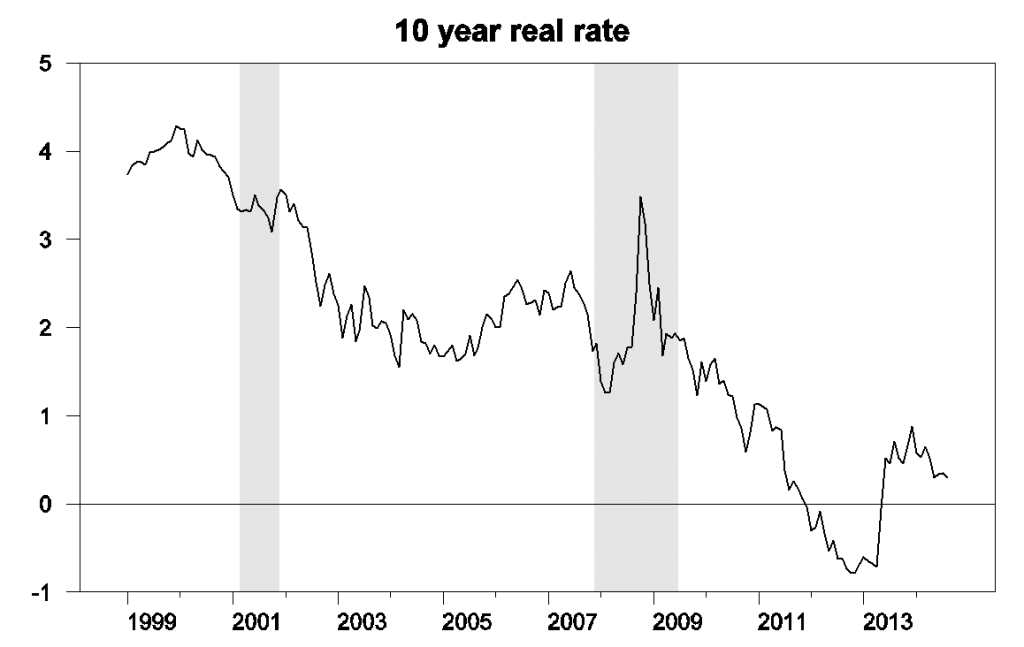 But here’s an interesting detail. While the return on a 10-year Treasury has been falling for most of this year, the 5-year yield has held fairly steady. 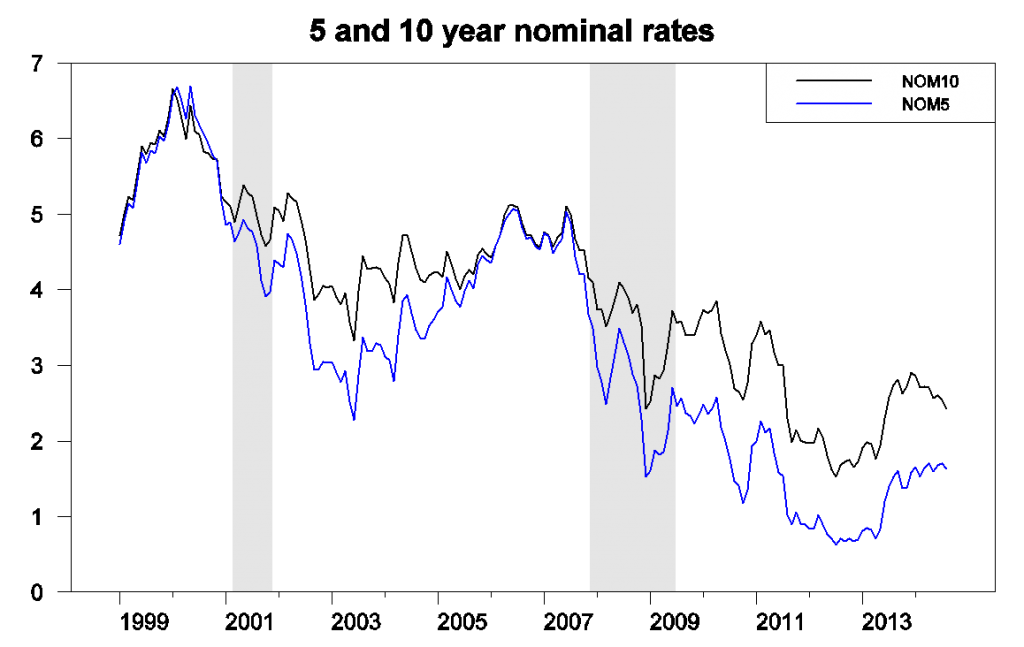 Sometimes we summarize the relation between those two yields using a forward rate. If today you simultaneously bought $1000 worth of a pure-discount 10-year bond and sold $1000 worth of the 5-year discount bond, it would be a complete wash in terms of the cash flow for the next 5 years. Five years from now you’d have to pay back the 5-year bond, and 10 years from now you’d get the proceeds from the 10 year bond. In effect you’ve locked in the terms today on a 5-year bond that you’re not going to buy until 5 years from now. The yield on that bond is known as the 5-year-5-year forward rate, and is plotted below. 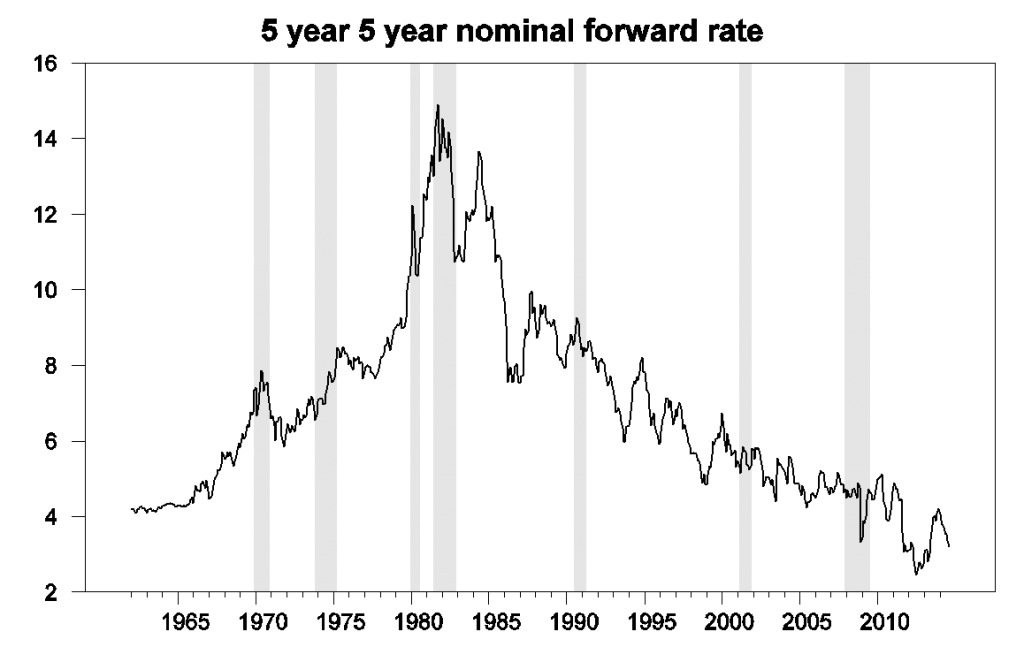 Five-year-five-year forward rate. Calculated as 2 times the 10-year rate minus the 5-year rate.

If investors were risk neutral, you could read that forward rate as the market’s expectation of where the 5-year rate is going to be 5 years from now. The drop in the forward rate during 2014 would indicate that something happened this year to persuade people that rates in the future were going to be lower than they had been expecting.

But there’s lots of evidence that markets are not risk neutral. The 10-year rate is almost always higher than the 5-year rate, not because people think that the 5-year rate is going to increase, but because they want extra compensation for locking up their money longer term. I made a very quick adjustment for risk aversion by using data since 1990 to regress the actual 5-year rate on a constant and what the 5-year-5-year forward rate had been 5 years previously, and used the fitted values of that regression as a “risk-adjusted” forward rate. This adjusted series is shown in blue along with the original in black in the graph below. The message is unchanged. 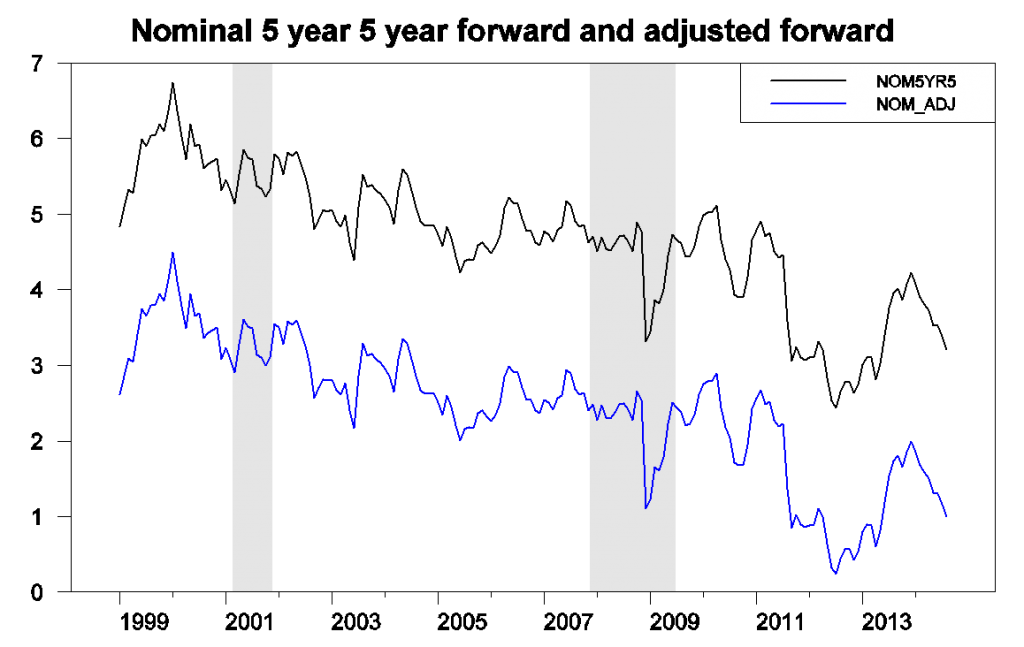 You can also calculate a real 5-year-5-year forward rate using the TIPS. Once you correct for pricing of risk, it looks like investors have been anticipating a negative real rate well into the future ever since the end of the recession. Expectations lifted in the first half of 2013, but have been falling sharply this year. 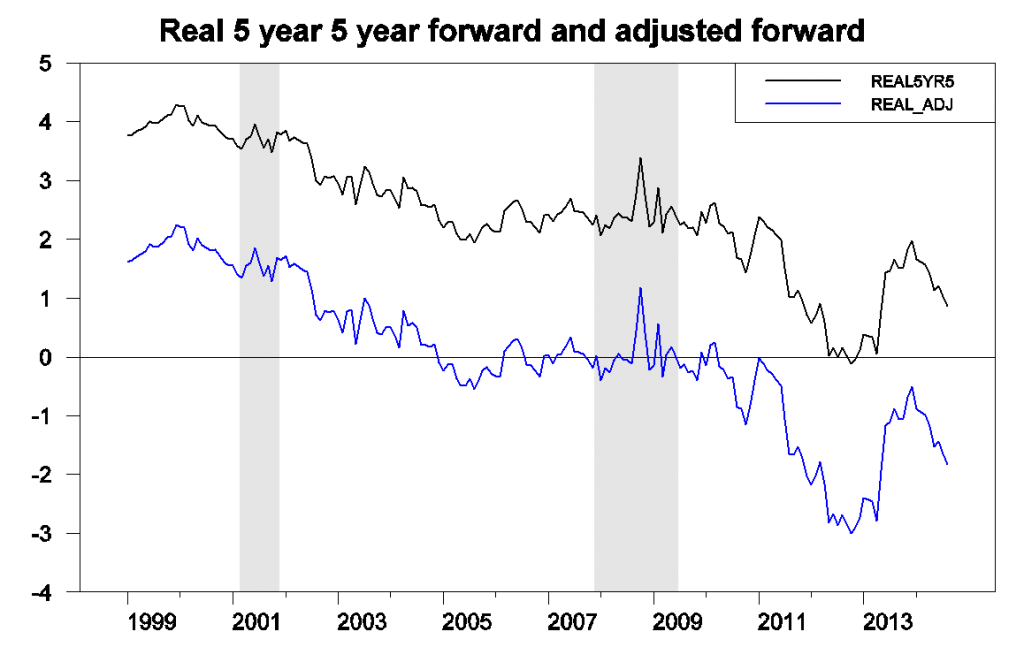 What could produce such a pattern? It’s hard to attribute it to changing perceptions about the Fed, which should surely matter more for the next 5 years than they would for 5 to 10 years from now. More confidence that the U.S. government will be able to keep debt from growing relative to GDP over the next decade may have played a role.

Another possibility is that more people are starting to take seriously the suggestion that we’re on a path now of secular stagnation with weak economic growth and poor investment opportunities over the next decade. But that’s hard to reconcile with the stock market, which climbed impressively this year.

Or then again, maybe the market has simply overpriced both stocks and long-term bonds.