There is a lot of discussion of how economic slack is fast disappearing, and I expect a lot of push on this view, given continued rapid growth in GDP as reported in today’s second release for 2014Q3. This view seems counter to (1) the CBO estimate of potential GDP and (2) the slow pace of inflation. My suggestion is that there remains a substantial amount of slack out there.

In Figure 1, I plot log GDP as reported in today’s release, and potential GDP as estimated by the CBO in its August report. 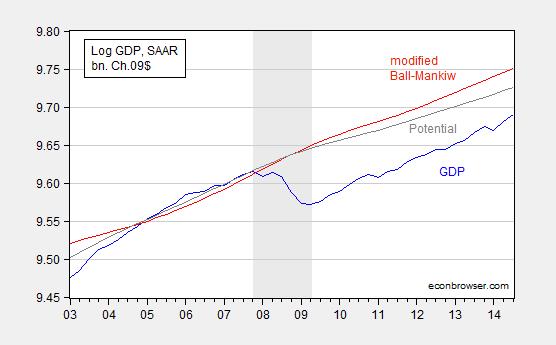 According to the CBO’s estimate of potential (if readers find my repetitive use of the adjective “estimated” tiresome, blame reader Tom), the current (estimated) output gap is -3.5% (in log terms). As I have discussed, there are a variety of other methods than the CBO’s (which is essentially a production function approach), including statistical detrending methods such as the Hodrick-Prescott filter (see [1] [2] [3])

I am going to use economics to infer the output gap and hence the level of potential GDP, i.e., exploiting the expectations-augmented Phillips curve. This means I am appealing to the following data. 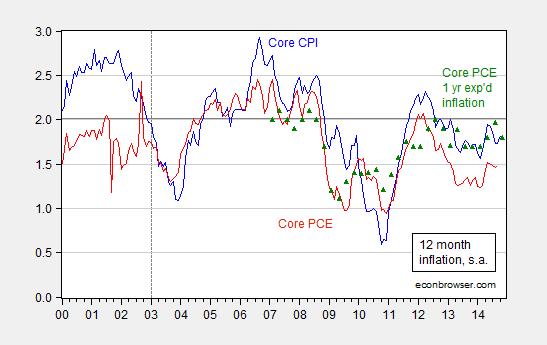 I estimate the analogous a parameter over the 1967Q1-2002Q4 period (so I’m assuming the accelerationist model holds over this sample); the estimate I obtain is approximately 0.08. (See this post for an earlier implementation.) I further assume that expected inflation equals 2% over the 2003Q1-2014Q3 period — which is pretty close to the average 1-year-ahead CPI inflation rate reported by the Survey of Professional Forecasters over this period. In other words, I am assuming that inflation expectations are now well-anchored. Hence, the variable on the RHS of (4) is:

I then HP filter this variable [edits 11/26, 8:40am] using the default smoothing parameter for quarterly data suggested by Hodrick and Prescott, to obtain an estimate of potential GDP shown in Figure 1 (red line).

What is interesting is not the exact path of estimated potential GDP, but rather that — using this method — the (estimated) output gap as of 2014Q3 is -6.0% (log terms). That is not to say this estimate is “better” than the others; just that there are various indicators of slack — some of which indicate more slack than others –, and it makes sense to appeal to several measures in these uncertain times, as argued by Elias, Irvin, and Jordà.

Implications for these findings for the implementation of the Taylor rule discussed in this Reuters article.

Update, 11/26 3:25PM Pacific: With the OECD’s release of the November 2014 Economic Outlook, we now have three estimates of the output gap at an annual frequency. I plot these, plus my version of the Ball-Mankiw approach in Figure 3 below. 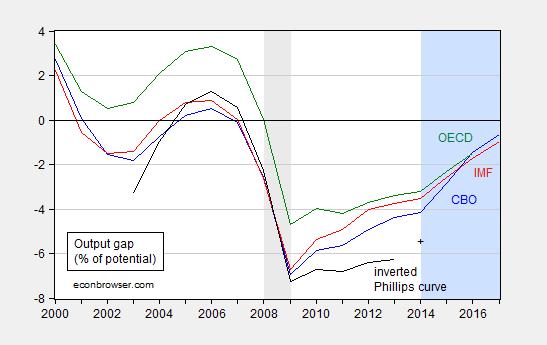 The degree of economic slack indicated by the three organizations ranges from -4.2% to -3.2% of potential GDP.

18 thoughts on “If Output Is Near Potential, Why Is Inflation so Low?”