Implications for the dollar’s trajectory

A few days ago, reader Tom chastised me for announcing “somebody’s estimations of a theoretical, unobservable phenomenon” as known. Today, I will repeat that alleged offense in regard to the counterfactual known as the purchasing power parity exchange rate, a pervasive concept in international finance.

Recall, if one extends the law of one price to the international context, and assume bundles of goods are identical, then it must be true that:

Where S is the exchange rate expressed in $ per foreign currency units, P is the US price level and P* is the foreign price level. In logs:

Few people believe that PPP holds instantaneously; however, many believe that s, p and p* are cointegrated with unit elasticities, so that q is stationary. One interpretation, then, is that PPP defines a “fair value” for the exchange rate, i.e., a “counterfactual”.

How many people believe it? Hard to say. Punching in the words “cointegration” and “purchasing power parity” into Google Scholar yields 100 pages of references (100 pages appears to be the maximum that Google Scholar provides). One example of calculating counterfactual “equilibrium exchange rates”, based upon PPP, for the currencies involved in the 1997 East Asian crises is “Before the Fall: Were East Asian Currencies Overvalued?”. Below are PPP estimates for the Korean won. 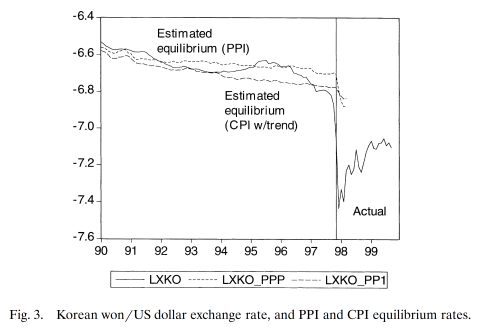 The use of PPP as a measure of “fair value” is commonplace; see for a recent instance Ruskin and Saravelos, “Long-term overshoot,” FX Forecasts and Valuations (October 9, 2014). [not online]:

The thrust of our USD positive forecasts are centered around the theme of multi-year policy divergence in favor of the dollar. This has not changed materially in the past year. Readers will find more surprises in the out years, notably in our new 2016 and 2017 forecasts when we expect the USD to overshoot ‘fair value’. This follows a familiar post-Bretton Woods pattern of USD overshooting (up and down) in every cycle when USD policy rates strongly transition from a very low ranking against G10 peers, to a ranking at or near the top end. Only in the 2018 – 2019 period do we project some reversion back to long-term ‘fair value’ in line with expected monetary policy trends. …

(Note: using Tom’s criterion, every appearance of the term “fair value” should be preceded by the adjective “estimated”, which I think would be tiresome, but that’s just me.)

Here is Deutsche Bank’s fair value series for the trade weighted US dollar. 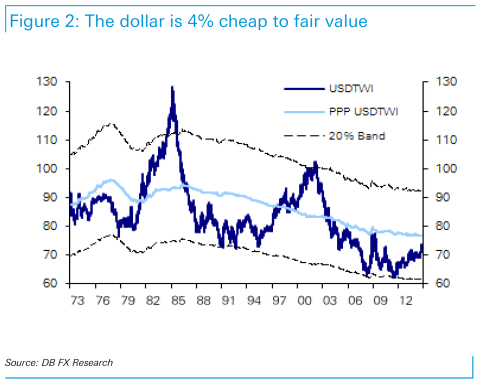 Some people would say that it is silly to estimate counterfactuals in this case — that is one couldn’t know what the exchange rate would be — but apparently the appeal to counterfactuals is widespread in the international finance/applied econometrics literature. Here are the DB estimates as of October for the degree of misalignments (of course, contingent on the possibility of calculating counterfactuals): 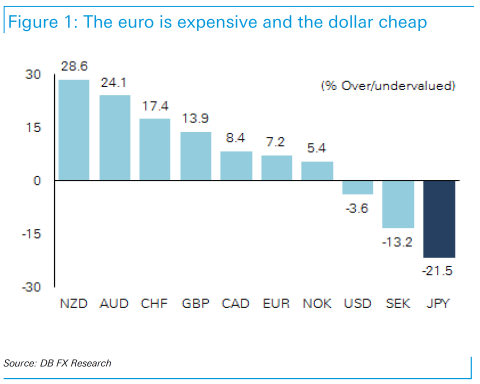 See here for Known Unknowns in Macro. A simple exposition on PPP is here, and a post on the subject of PPP and the dollar over eight years ago.