(If you are wondering about the pervasive use of the adjective “estimated”, see this comment by reader Tom.) 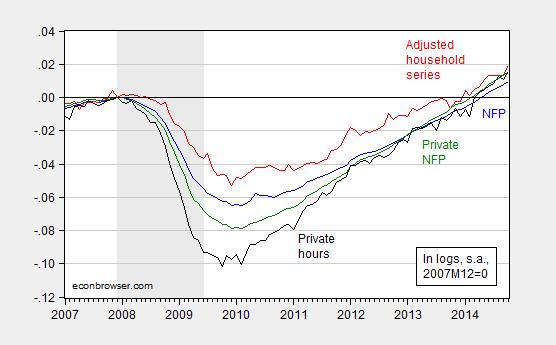 Note that the cumulative growth since 2007M12 of the (estimated) household series adjusted to conform to the NFP concept remains substantially above that of the officially estimated NFP series — nearly 1% in log terms (the actual level is about 0.5% in 2014M10). In the previous recovery, many observers argued that one should pay special heed to this indicator, given the difficulties in the birth/death model; strangely, I have not heard those same observers make similar comments this time around. The usual caveats apply to the household series — the noise associated with estimates derived on this survey are relatively large.

The second observation: the (estimates of) nonfarm payroll employment have been consistently revised upward over the past couple months. 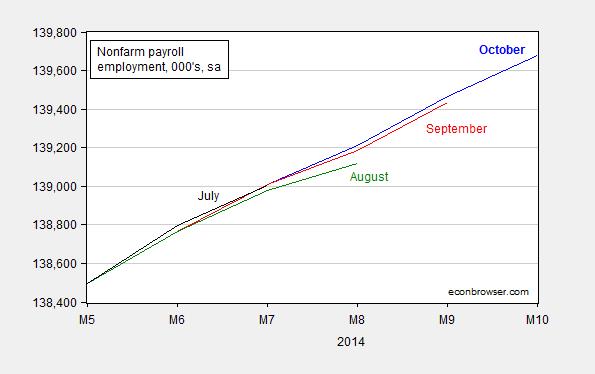 Third observation: wages are rising, but so too are prices. 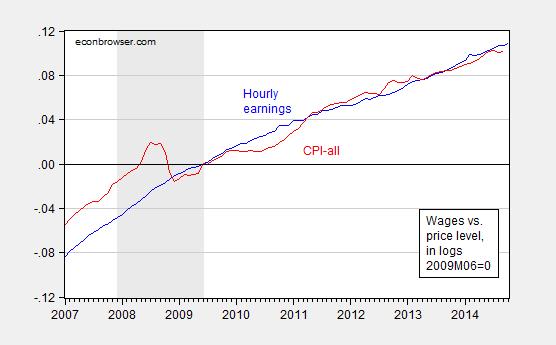 Figure 3: Log average hourly earnings for production and nonsupervisory employees, as estimated by the BLS in the establishment survey October release, and log CPI-all (red), both normalized to 2009M06=0. Recession dates as estimated and defined by the NBER Business Cycle Dating Committee shaded gray. Source: BLS via FRED, NBER and author’s calculations.

In order to assess the inflationary impact of rising wages, several things must be taken into account; the first is the anchoring of inflation expectations (if they are anchored, then rising wages tend to shift the income share). The second, even if inflation expectations were unanchored, labor productivity is an important determinant of inflation. Hence, unit labor costs, which are labor costs adjusted by productivity, is the more relevant variable. In Figure 4, I reprise a graph (slightly modified) based on data from the recently released employment and costs release. 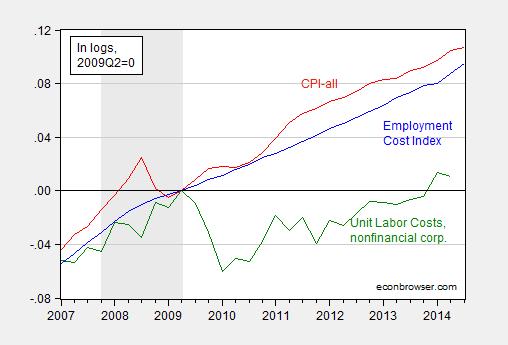 That is, estimated unit labor costs in the nonfinancial corporate sector in 2014Q2 are only 1.1% higher than the previous peak five years ago.

Update, 4:20PM Pacific: A querulous comment by Anonymous doubtful that employment growth is greater under Obama than Bush prompts me to post this Figure 5. 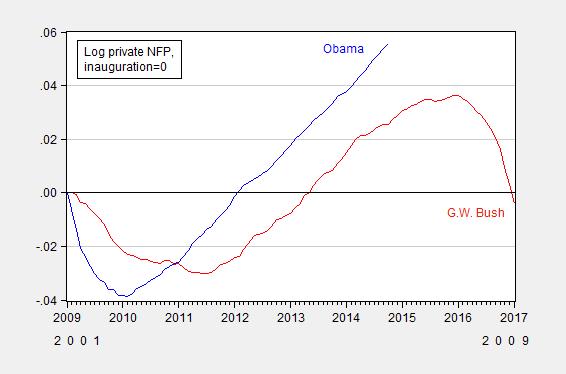 4 thoughts on “October Employment Release: Market Improvement, but Not Yet Tight”