…a huge bond market with a strong track record for predicting economic problems is flashing a warning sign right now. … The prices of Treasury bonds are rallying fiercely. 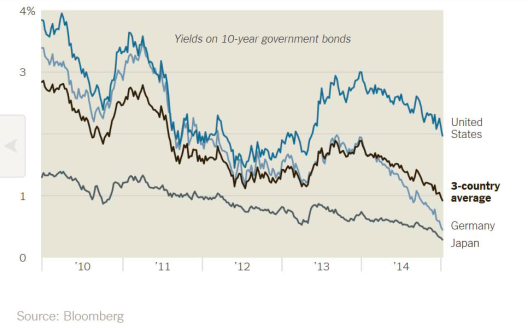 Over the longer term, the nominal yield should match the nominal GDP growth rate; however, in terms of indicators of recessions, the term premium is more typically examined. And here, there is some indication of a slowing. Figure 1 shows spreads for 10 year-3 month Treasurys and 10 year-2 year Treasurys. 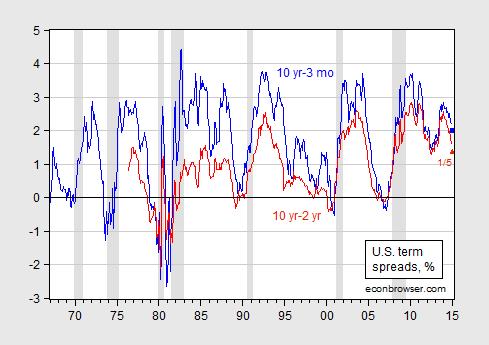 Of course, one problem is that we’ve hit the zero lower bound, so that it might be the case that the relationships that obtained before don’t anymore; in particular, the flattening of the yield curve might not signal incipient Fed tightening (as much as in the past).

One could appeal to real yield spreads (see Figure 2), but we don’t have enough of a track record to be able to infer much about future growth. 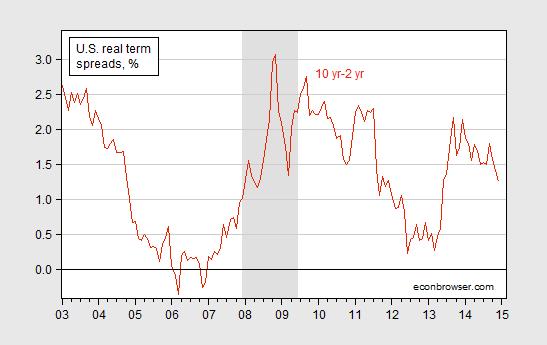 The absence of such a track record with the real yield curve suggests appealing to the standard (nominal) yield curve. Chinn and Kucko (2014) provide a series of probit estimates of the link between the spread and recession (using NBER indicators). Using the estimates for the 1998-2013 period (Table 9), the values as of 1/5/2015 indicate an 11% probability of recession in the next 12 months. However, the adjusted R2 is only 0.19.

Based on the 1/5 values, the point estimate for growth in industrial production over the next 12 months is around 2% (Table 3).

Note that aside from the ZLB constraint, another problem with interpreting the outlook based upon historical correlations is other things that might have expected the behavior of the yield curve. If the expectations hypothesis of the term structure is not the only determinant of long term rates, and some version of the preferred habitat model obtains, then it could be that long term rates are depressed due to excess savings from abroad. That is a theme that we’ve been discussing for a long time, [1] [2] but now it’s exacerbated by the flight to safety.

Update, 5pm Pacific: Using the Xia-Wu shadow Fed funds rate instead of the standard Fed funds rate results in a much steeper yield curve, as shown in Figure 3. 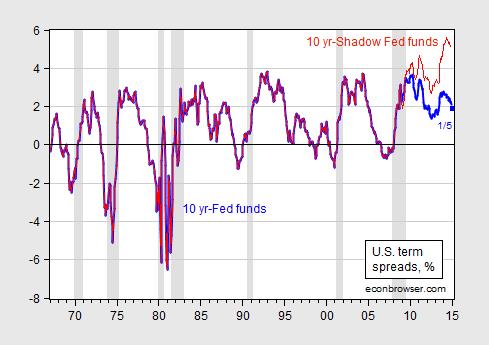 45 thoughts on “An Economic Warning?”