Reader Patrick R. Sullivan keeps on talking about the post-World War II boom, and telling people to watch The Best Years of Our Lives (A fine movie, by the way). I think I know why he thinks times were great for all, if your history comes from Hollywood. Rick Stryker chimes in with the statement: “If you talk to people who were around right after WWII, as I have, you’ll find that they agree with Patrick R. Sullivan that the latter part of the 1940s was a boom.”

I’ve been wondering why I didn’t hear all these stories about those halcyon days when I was growing up. I know from the aggregate statistics that private consumption increased, while output declined. Those facts are not in doubt. Then I thought, well maybe not everybody’s parents (or grandparents) experienced the immediate post-War era the same way. Here’s some information, from Fairlie and Sundstrom ILLR (1999). 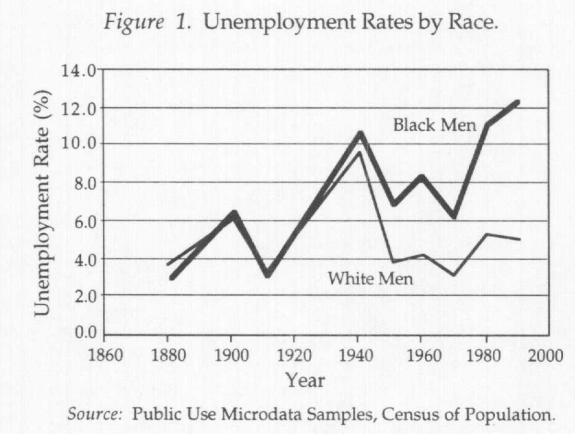 Update, 1/4 11am Pacific: Since several readers have had difficulty reading the original graph, I provide a revised one below. 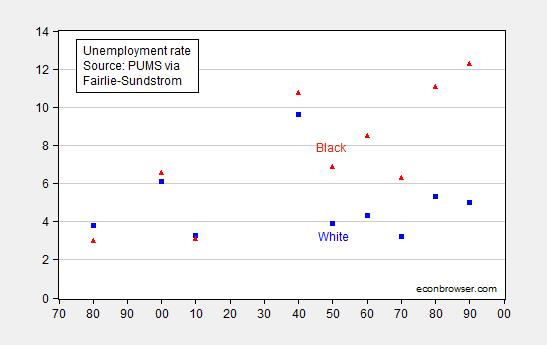 So, I’m going to leave proof by anecdote to folks like Sullivan and Rick Stryker. For me, output goes down, as shown in this post (by GDP, by industrial production). Measured private consumption rises, but not enough offset the reduction in G and I to make GDP rise. Times are “good” for some, maybe not so good for others. People can investigate further using data, from Valerie Ramey’s data set, or the NBER Macrohistory database. In other words, ignorance of how to use a basic spreadsheet is no excuse for relying on anecdotes.

Oh, and if you’re going to rely on Hollywood for history, try first reading Past Imperfect: History According to the Movies. Or you’ll believe the Depression in Canada was less marked than the one in the US, and other silly things. 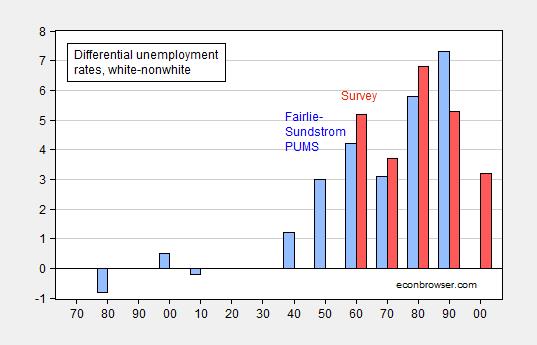