Reader Mike V castigates me for over-use of logs.

I’m not at all averse to logs, but they have a time an a place. You are trying to point out relatively small changes in income over a short time-series – not the nearly exponential changes in the S&P 500 over the last 100+ years.

Let me provide some examples of where it’s useful to use logs. First, consider the dollar’s value over the course of a year and a half (somewhat less than 100+ years). 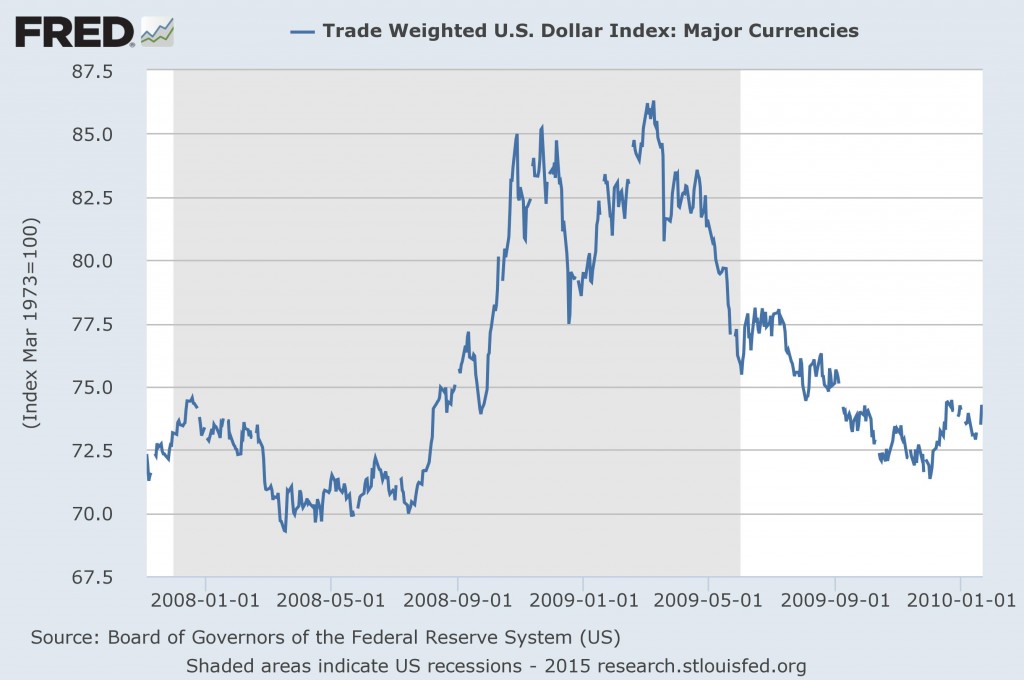 Source: Federal Reserve Board via FRED.

One advantage of using changes in log terms is that additivity is retained, as Jim mentioned in an earlier post; using a log approximation of log(Q2/Q1), one finds the appreciation is 20.98%, the depreciation is 18.76%, the net change is 2.22%. And this is exactly what one gets looking directly at the log change from July 15, 2008 to December 2, 2009.

Third, for those of us who work in international finance, there is yet another reason use logs. Consider the dollar/euro exchange rate; there are two equally valid ways of quoting the rate — the number of dollars per euro, and the number of euros per dollar. If one express S as USD/EUR, and calculated the annual percent change using the base period formula, one would find that one would not get the negative of the annual percent change of 1/S in units of EUR/USD. (One would, if the depreciation rates were calculated using log differences.) To make this more concrete, from the US perspective, dollar has appreciated 19.1% from June 2014 to July 2015, while from the Euro area perspective the euro has depreciated by 23.6%.

See also Jim’s post on the use of logs.

The next post on logs will address whether to estimate a cointegrating relationship in levels of consumption and disposable income, or whether it is more advisable to do so in log-levels.