Following up on this post, estimating the consumption function

Consider the canonical consumption-income relationship discussed in macro textbooks. For pedagogical reasons, the relationship is often stated as:

Where C is real consumption and Yd is real disposable income. Figure 1 depicts the relationship over the 1967-2015Q2 period. 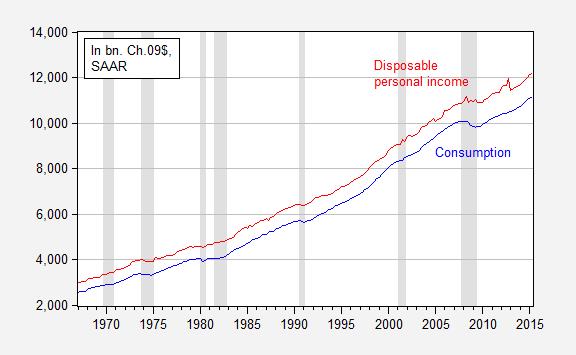 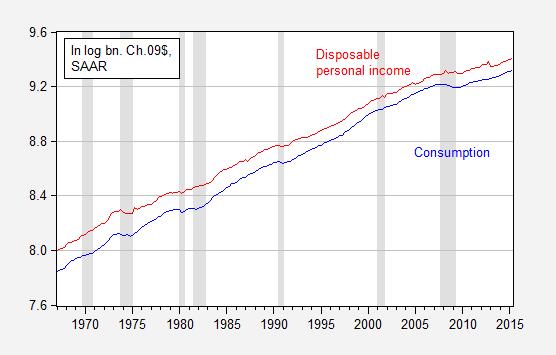 It does seem hard to choose one over the other merely by looking. Reader Mike V writes:

I just think you lose a lot of people by using logs for every. graph.

Which one is the better way to characterize the relationship? I will note that one distinct advantage of the logged version is that one can immediately see at what times consumption growth rates slow — and that is in Figure 2. Looking at Figure 1, one might have thought consumption growth rates were higher in the 2000’s (up to 2007) than the 1990’s. But the logged values in Figure 2 allows one to see past that illusion (constant growth rates are a straight line when examining logged values; see Jim’s post for more). While not a definitive reason to prefer logs, it is useful for quick data assessment.

At first glance, estimating each by way of OLS does not allow much to distinguish between the two representations. In levels:

Clearly, neither specification is adequate, but is one to be preferred to another? Theory does not provide guidance, as the linear consumption function is typically used for convenience. 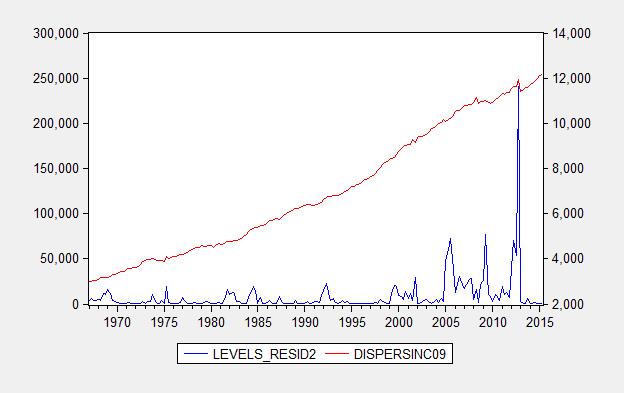 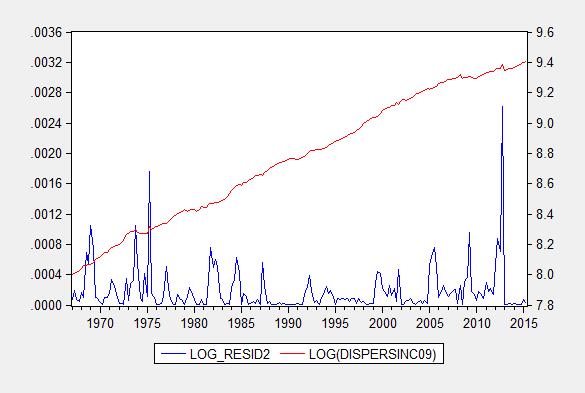 While in both cases the residuals exhibit a (positive) correlation with the right hand side variable, it is much more pronounced in the levels regression. In other words, the real dollar errors increase systematically with real dollar disposable income, while (log) percent errors increase less strongly with percent increases in real disposable income. This provides one reason to prefer a log specification. By the way, a Jarque-Bera test rejects normality for both residuals, but much more soundly for the levels specification.

Now, the residuals exhibit substantial serial correlation (rule of thumb: possible spurious correlation of integrated series if the R2 > DW). This suggests estimating a cointegrating relationship (see this post) or – if one wants the short run dynamics – an error correction model. The analogs to equations (2) and (3) (after augmenting with household net worth to account for life-cycle effects) are:

In this case, there is no clear advantage to one specification or the other. The levels specification indicates explosive behavior (as the coefficient on the lagged level of the dependent variable is positive; but it’s not statistically significant). Only the lagged differenced variables are statistically significant. In the log specification, the implied behavior is not explosive, given the coefficient on the lagged log level of the dependent variable; actually given the non-significance of the coefficient, there does not appear to be evidence of cointegration (actually, all that we know is that consumption does not seem to revert to re-establish the long run relationship between consumption, income and wealth – it might be that the other two variables do the adjustment, and in fact a Johansen test suggests this is the case).

For a more detailed analysis, disaggregating consumption data, see this post. In that case, logs in conjunction with disaggregation seems to do the trick.