I have been stressing the international implications of a potential interest rate increase as a rationale for deferring monetary tightening. Export growth is slowing and economic activity in the tradables sector (manufacturing output, manufacturing employment) as the dollar has appreciated. [1] [2] How much more appreciation should we expect should the Fed tighten?

This is actually a harder question to answer than one would think. That’s because over the past seven years, the correlation between the US short term interest rate and the dollar has essentially disappeared as the zero lower bound has placed a floor on rates. This point is illustrated in Figure 1. 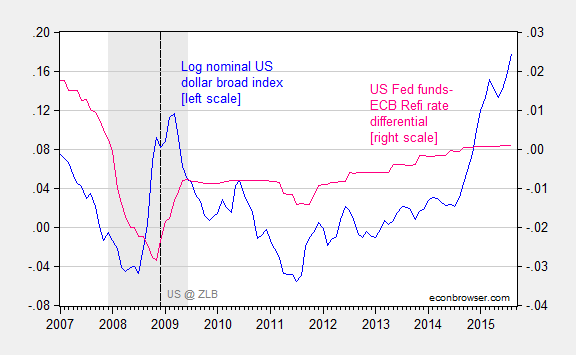 As I’ve pointed out before, the US dollar does seem to be correlated with the shadow Fed funds rate. Without a good measure of rest-of-world interest rates, I use the shadow rate for the euro area. Both series are calculated by Wu and Xia. These results are intuitive; increases in the interest rate result in strengthening of the currency (as in the Dornbusch Frankel model). An increase in the VIX also strengthens the dollar, which is consistent with the safe haven role of the US dollar.

First, given that shadow rates are estimated, the true shadow rates are probably measured with error, biasing downward the OLS point estimates. Second, the long run impact is probably not accurately measured by the coefficients on the included lags. Second, augmenting the specification with a lagged dependent variable yields a coefficient of 0.3; if one were to accept the common factor restriction, this implies the (statistical) long run impact of higher interest rates is closer to 1.9 (which is the coefficient obtained by a regression in levels).

The cumulative impact of a one percentage point interest rate increase is 2.33.

If markets behave in the wake of liftoff as they have during the last six years, then a literal interpretation of the results suggests a 25 basis points increase will induce 0.6 percent appreciation of the nominal broad-currency-basket dollar index.

Of course, the interpretation of what would happen if the Fed were to raise the Fed funds rate to 0.25 to the interest differential is open. At the end of August, the shadow Fed funds rate was -0.92%. The effective Fed funds rate is now 15 bps, so an increase of 25 bps to 40 bps would mean an increase of about 1.3 percentage points. That means about a 3% increase in the trade weighted dollar (3.6% for the major-currency-basket dollar index). 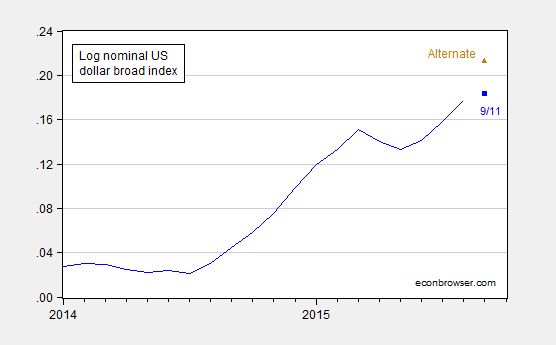 Is this a big impact? Since the standard deviation of dollar changes is about 1.2% (2008M12-2015M08), it’s certainly noticeable. And I think undesirable for US economic activity at this juncture.

In addition to the effects on the US economy, the stronger dollar on top of a higher Fed funds rate will have measurable effects on emerging markets, as documented here (see analysis here).

4 thoughts on “Liftoff: Empirical Assessment of the Implications for the Dollar”