This is a particularly critical question, given the debate over the desired Fed funds rate, even when just operating within the Taylor rule framework, as discussed in this post.

There are a variety of other methods than the CBO’s (which is essentially a production function approach), including statistical detrending methods such as the Hodrick-Prescott filter (see [1] [2] [3]). Here, I am going to use economics to infer the output gap and hence the level of potential GDP, i.e., exploiting the expectations-augmented Phillips curve, as recounted in this post.

I estimate the analogous a parameter over the 1967Q1-2002Q4 period (so I’m assuming the accelerationist model holds over this sample); the estimate I obtain is approximately 0.08. (See this post for an earlier implementation.) I then make two assumptions. First, that adaptive expectations hold, and second that expected inflation equals 2% over the 2003Q1-2015Q3 period — which is pretty close to the average 1-year-ahead CPI inflation rate reported by the Survey of Professional Forecasters over this period, as discussed in this post. In other words, in this second case, I am assuming that inflation expectations are now well-anchored. Hence, the variable on the RHS of (4) is:

I then HP filter this variable using the default smoothing parameter for quarterly data suggested by Hodrick and Prescott, to obtain an estimate of potential GDP shown in Figure 1, with green line corresponding to adaptive expectations and red line to anchored. 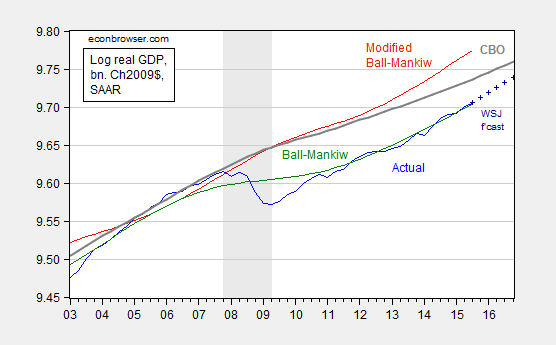 The CBO estimate of potential implies an output gap of -3.2% (in log terms) at 2015Q3. Using the October Wall Street Journal survey estimate for growth over the next year, the gap will still be -2.1% as of 2016Q4! Now, if one believes that the simple accelerationist model of inflation holds (i.e., today’s inflation rate equals last period’s), then the output gap is essentially zero. However, if one believes that inflation expectations are pretty well anchored at 2% (which seems reasonable, given Figure 1 in in this post), the the output gap is nearly -7%! That seems implausible to me, but then, so too does a nearly zero gap, given the lagging inflation rate.