We are fortunate to present today a Guest Contribution written by John Kitchen (U.S. Treasury). Any views or opinions expressed are solely those of the author and not of the Treasury Department or any other institution.

With the recent declines in valuations in financial markets, an analysis based on “Relative Valuations of Fixed Capital and Financial Assets in the United States” indicates that we are in a “gray area” regarding the signaling of a heightened risk of recession.

The recent volatility in financial markets and equity valuations may be a reminder of a lesson economists and policymakers learned from the financial crisis and great recession: that they didn’t fully understand the relationships from the financial sector and financial valuations to real macroeconomic variables and overall economic performance. The paper “Relative Valuations of Fixed Capital and Financial Assets in the United States” uses data from the integrated macroeconomic accounts (IMA) from the Bureau of Economic Analysis and the Federal Reserve to provide more information — and at least an initial effort — for better understanding relationships between the real economy and financial valuations. The analysis examines the various layers of the relationships of asset valuations relative to potential GDP for the private nonfinancial sectors of the U.S. economy, building up from the relative valuations for fixed capital assets (the capital stock), to the relative valuations for total nonfinancial assets (including land), and then to total assets (i.e., including financial assets). Just as the name of the data set from which the information for the paper is drawn implies, the financial and real economy data are fully integrated in the analysis.

While many issues are addressed in the paper, including the observed relative stability of the aggregate capital-output ratio (consistent with a Kaldor “stylized fact”) and the observed volatility of relative financial valuations, one part of the paper addresses the observed cyclical performance of asset valuations and the role as a leading indicator for the economy’s business cycle. In that context and based on historical relationships, the recent declines in equity valuations indicate that we are currently in a situation of somewhat heightened risk of a recession – but at this time it is in a “gray area” that does yet outright indicate a recession compared to what has been observed historically. (Note the financial variables are leading indicators in contrast to the coincident variables recently addressed by Menzie Chinn.)

Using those relationships and an assumption for financial and equity valuations for the first quarter to be consistent with an S&P500 value of 1877 (Monday’s close), what would that imply? Regarding the total asset valuation, the following chart shows that total asset valuations are behaving suspiciously like they have at previous asset valuation peaks preceding business cycle peaks and recessions. 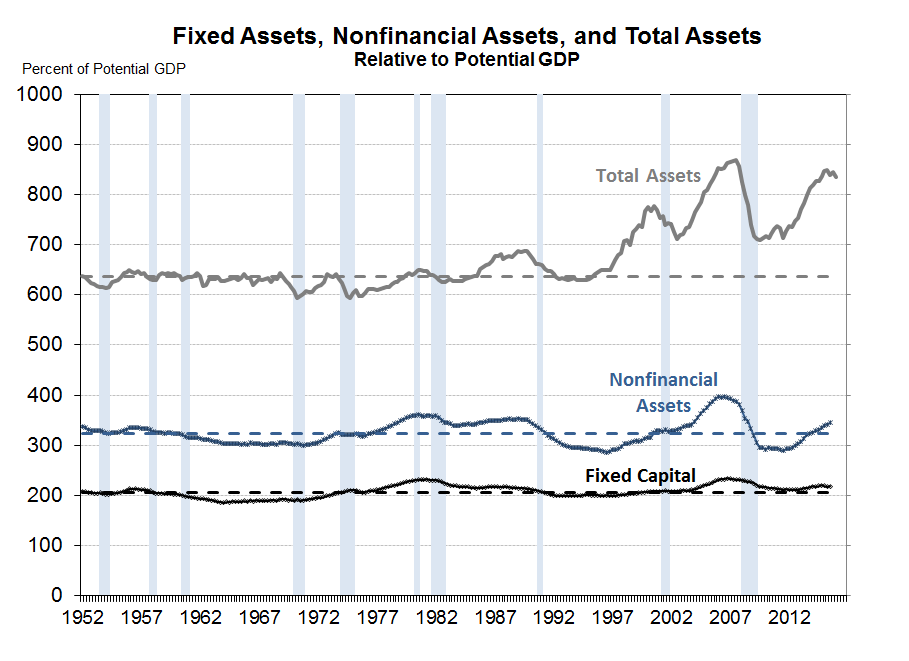 Regarding the univariate recession probability estimate, the relationship also suggests some heightened risk. The following chart shows the estimates for a probit regression of the binary recession indicator on the current and three lagged values for the change in total asset valuation (the regression results are shown in the paper but the chart shown here is not). 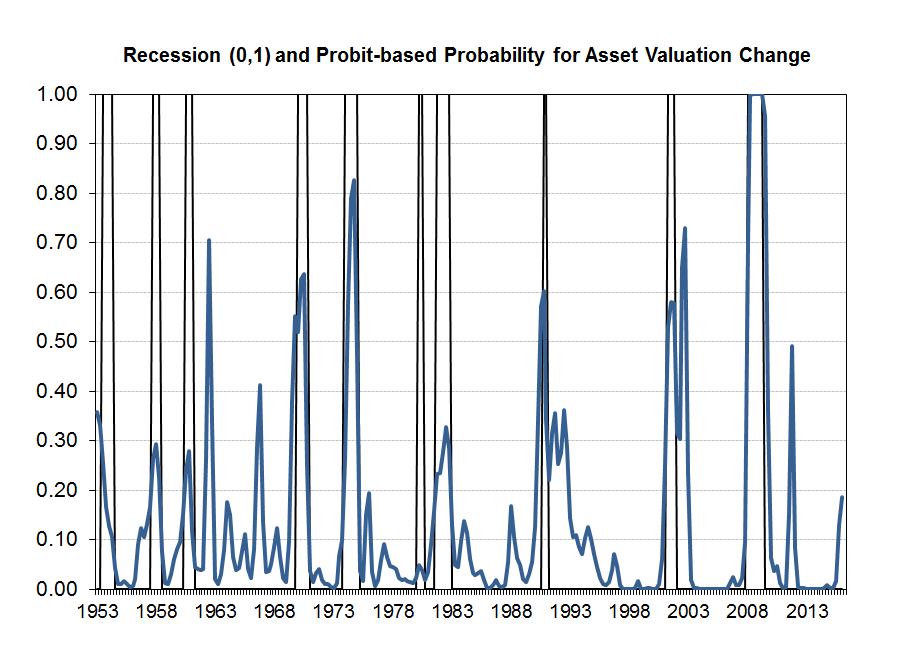 The estimates indicate that the current asset valuation change yields a recession probability of about 19 percent. While there have been various observed “false” signals historically, for periods “sufficiently removed” from a recession period it is rare to see an estimated probability of recession from this indicator this high without subsequently entering recession. The notable exception is for 1966 – and some analysts would agree that a subsequent recession in that case was perhaps the correct call. In various cases in the past, the estimated probability was in roughly the 30 percent to 70 percent range prior to recessions, and only twice did it exceed 80 percent. So, while the predictive ability of the measure is somewhat imprecise, it does suggest somewhat heightened risk.

Bottom line: Declines in equity markets and total asset valuations are flashing warning signs, but are not yet at this time providing an outright indication of recession.