The global economy is slipping into recession. The evidence is showing up in all the usual ways: slowing output growth, slumping purchasing-manager indexes, widening credit spreads, declining corporate earnings, falling inflation expectations, receding capital investment and rising inventories. But this is a most unusual recession– the first one ever caused by falling oil prices.

A drop in oil prices means less money in the hands of oil producers but more money in the hands of oil consumers. Currently the U.S. is importing about 5.1 million barrels a day more than we’re exporting of crude oil and petroleum products. At $100 a barrel, that had been a net drain on the U.S. economy of $190 billion each year. That drain that will now be cut by more than half by falling oil prices.

We usually see consumers spend their extra income right away, whereas it takes more time for producers to alter their spending plans. As a result, even if the U.S. was not a net importer of oil, we might still expect to see a short-run positive stimulus from dropping oil prices. The actual change in overall consumption spending in response to the oil price decline through March of last year was about 0.4% smaller than would have been predicted on the basis of the historical correlations. But we see something different when we look at the behavior of individual consumers. A study by the JP Morgan Chase Institute compared the response to lower gasoline prices of people who had previously been buying a lot of gasoline with the responses of people who had been buying relatively little. They found that the first group increased spending relative to the second, with the magnitude of the difference in spending between the two groups consistent with the claim that consumers spent almost all of their windfall. The conclusion I draw from the seemingly conflicting evidence in the macro and micro data is that each consumer spent more than they would have if oil prices had not fallen, but that there were other macro headwinds at the same time that were offsetting some of the positive stimulus of falling oil prices.

In any case, we’ve now had plenty of time for cuts in spending by U.S. oil producers to start to have an economic effect of their own. If there’s an increase in spending by consumers of $1 and a decrease in spending by producers of $1, it’s not really a net wash for the economy. The reason is that the consumers are spending their money in different places and on different items than the producers are cutting. There is a lot of specialized labor and capital that’s involved in oil extraction that can’t move costlessly to some other sector when the oil patch goes sour. I presented a model in 1988 in which an oil price decline could actually result in an increase in unemployment either because it takes time for people in the oil sector to move to the sectors where the jobs are now available, or because unemployed oil workers are still waiting where they were hoping for conditions to improve.

And of course we’re talking here not just about the people who work in the oil industry itself but all the other industries and services that sell to the oil sector and more in turn who sell to these suppliers. A recent analysis by Feyrer, Mansur, and Sacerdote concluded that without new U.S. oil and natural gas extraction, there would have been 725,000 fewer Americans working and a 0.5% higher unemployment rate during the Great Recession.

There are thus some reasons why a decrease in oil prices would be a boost to the U.S. economy and other reasons why it could even be a drag. A number of studies have looked at the effects of oil price decreases and concluded that these have little or no net positive effect on U.S. real GDP growth; see for example this survey. The price of oil fell from $30/barrel in November 1985 to $12 by July of 1986. U.S. real GDP continued growing throughout, logging a 2.9% increase overall for 1986, neither significantly faster nor slower than normal.

But 1986 was a bad time for Texas and the other oil-producing states. Here’s a graph from some analysis I did with Michael Owyang of the Federal Reserve Bank of St. Louis. We estimated for each state’s employment growth a recession-dating algorithm like the one that Econbrowser updates each quarter for the overall U.S. economy (by the way, a new update will be posted this Friday). In the gif below you can watch the energy-producing states and their neighbors develop their own regional recession during the mid-1980’s even while national U.S. employment and GDP continued to grow.

One of the reasons that more people outside of Texas share Luskin’s worries is the recent striking comovement between oil prices and the U.S. stock market. On days when oil prices go down, U.S. stocks go down, suggesting the market is seeing bad news, not good, in oil price declines. 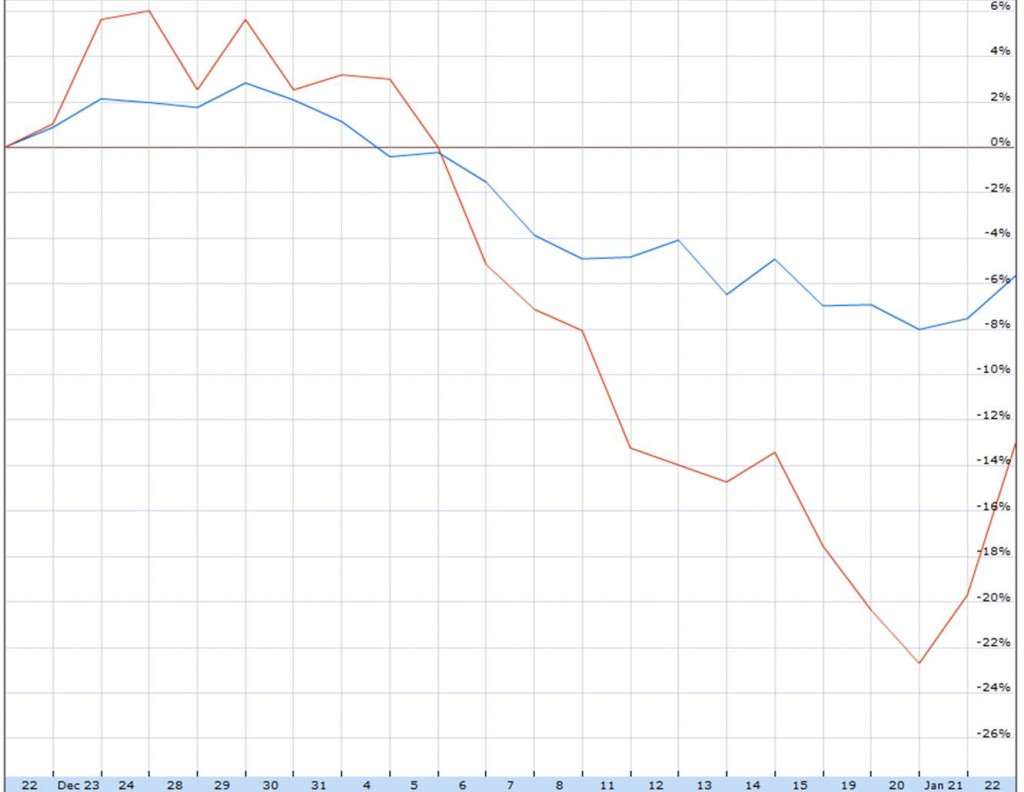 Cumulative percent change since Dec 22 in U.S. stock market (as measured by S&P500, in blue) and U.S. oil prices (as measured by the USO ETF, in red). Source: Google Finance.

The correlation is even more striking if you look at the Chinese stock market instead of the U.S. 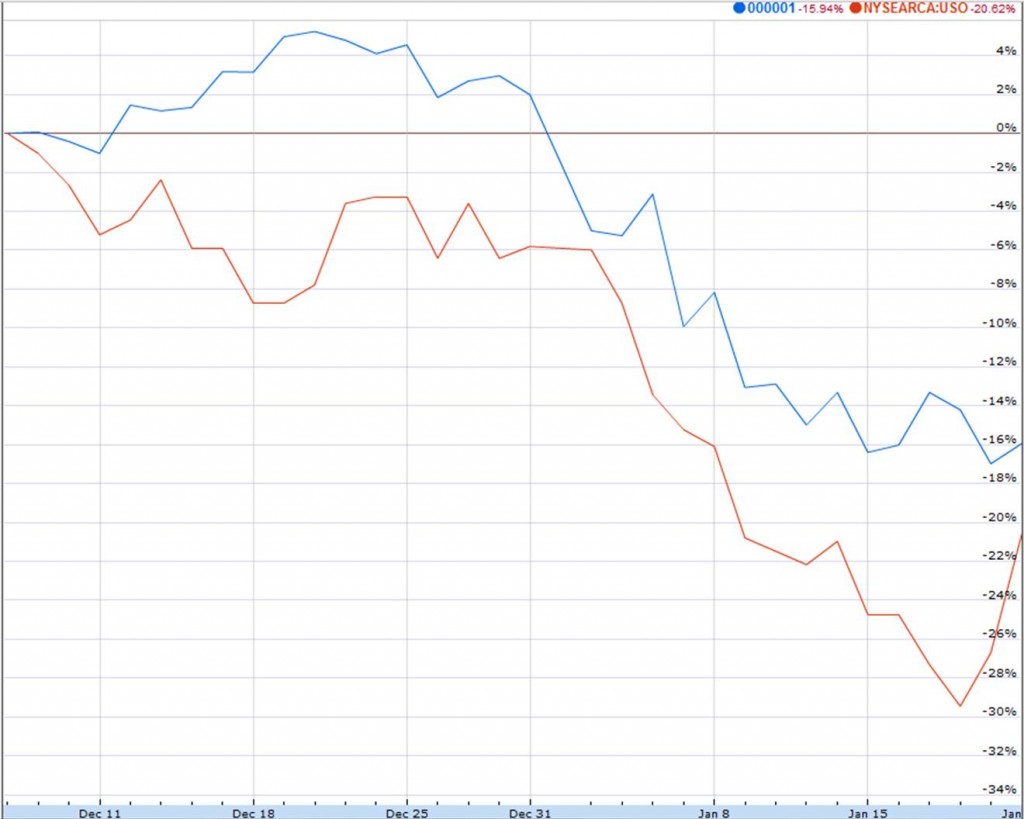 Cumulative percent change since Dec 8 in Chinese stock market (as measured by Shanghai SSE composite, in blue) and U.S. oil prices (as measured by the USO ETF, in red). Source: Google Finance.

And that’s not because of all the carnage that’s in store for Chinese frackers. It’s concerns about China that are driving oil prices, not the other way around. If there is a global slowdown or recession, it certainly would be a factor contributing to lower oil prices.

But regardless of whether it’s oil prices that are moving stock prices or the other way around, folks in Texas and North Dakota have plenty of reason to be concerned.

30 thoughts on “Can lower oil prices cause a recession?”