More states are slowing even as the Nation continues to expand. The states that contracted include Wisconsin and Kansas, states pursuing a contractionary fiscal policy. Wisconsin’s level of activity lags that predicted by historical correlations.

The Geographic Dispersion of Growth. A diffusion index measures the proportion of individual entities expanding or contracting; a reading greater than 0 indicates a majority (of states, in this case) are expanding. 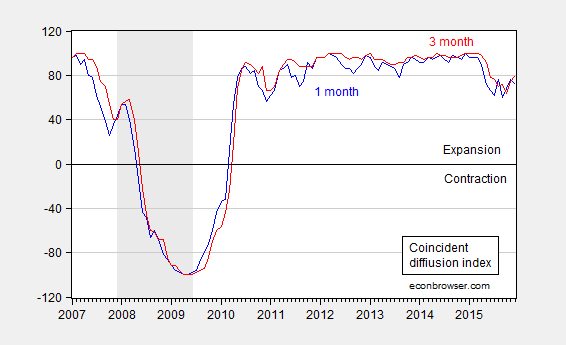 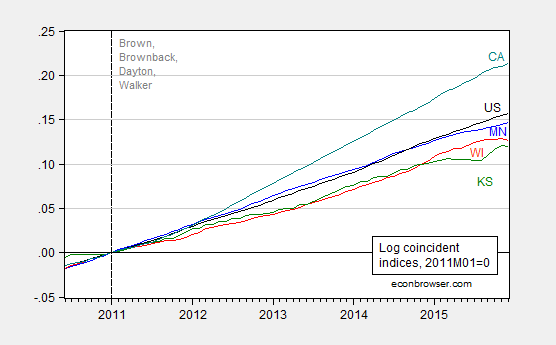 How Badly Is Wisconsin Lagging? While Wisconsin economic activity is declining, it might be the case that this is because national economic activity is decelerating, and Wisconsin follows the Nation. This hypothesis can be assessed by measuring the historical correlation between Wisconsin and the US up to 2009M06 using an error correction model, and then conducting out-of-sample forecasts (an ex post historical simulation). The forecast plus 90% forecast interval is shown in Figure 3. The methodology is laid out in this post (except a 2 lag specification is used, and is estimated over a sample starting in 1990). 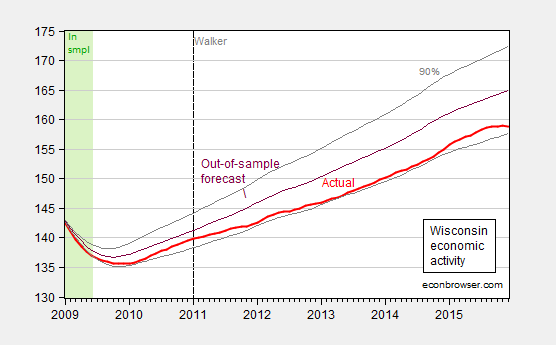 I have not assumed weak exogeneity of US economic activity for Wisconsin. Doing so — which seems plausible –yields the following figure. 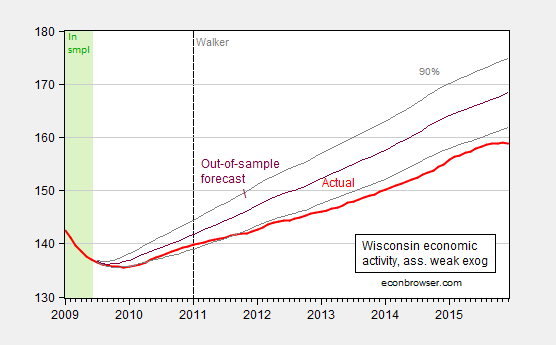 In other words, Wisconsin is, with statistical significance, underperforming what would have been expected from historical experience. One argument is that Wisconsin’s statistical underperformance, which has intensified in recent months, is due to the dollar’s recent strength. This is a plausible interpretation for the last year [1]; however it fails to explain why underperformance was in evidence during the prior period of dollar weakness.

Fortunately for Wisconsin residents, our Governor Walker has assured us that The state of our state is strong!.