Five Thirty Eight warns us to prepare for a (not likely imminent) recession; Wall Street Journal‘s Real Time Economics cautions “All Clear on Recession Risk? Not Yet”, even if the latest employment indicate continued growth. Time to review market indicators of the outlook. 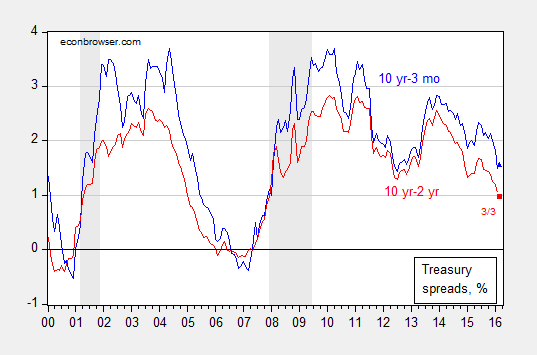 Notice that while both spreads have shrunk considerably, they remain positive. As of 3/3, the ten year – three month spread was 1.53%. Plugging this value into the equation for predicting recessions, estimated over the period of the Great Moderation (see this post) yields an implied probability of recession of 6.7% (down from 9.3% based on the 2/11 spread).

Across the globe, most spreads are positive. 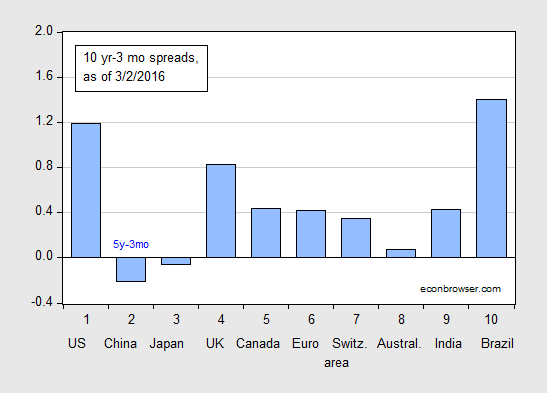 Contrast this with mid-April 2015, when many of the spreads were negative or near zero. 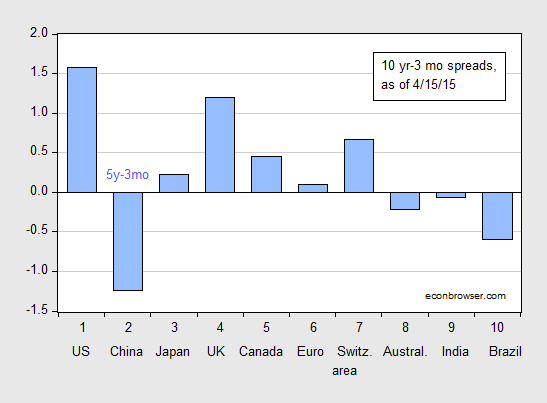 As noted in this post, there’s little evidence that inversions reliably predict recessions in these other countries. Note that one could argue that Brazil is in recession, while India did not experience one. Further, China’s inversion was steeper nearly a year ago than it is now.

Just because the yield curve does not signal an imminent recession in the US, and current employment growth continues, doesn’t mean we should stay the course on raising the Fed funds rate [1]. In particular, monetary conditions are already tightening as foreign investors (private and official sector) are decumulating their stocks of US Treasurys. Figure 4 shows that by December 2015, foreign holdings were essentially unchanged relative to December 2014. 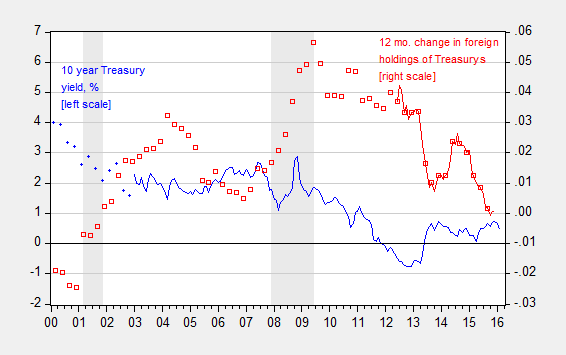 In other words, the decumulation of emerging market foreign exchange holdings is showing up in a reduced pace of Treasurys acquisition. That’s not yet a decumulation of Treasury’s (that scenario’s impact is outlined in this post), at least as measured, but it might very well in the near future (and these TIC data are estimates; more reliable numbers on holdings will come out with the benchmark numbers).