Political Calculations arrives at an alarming conclusion that real GDP will be downwardly revised by a large amount when the annual benchmark revision comes out in July.

In [releas[ing] its estimates of state level Gross Domestic Product through 2015-Q4], the BEA’s data jocks may have provided an unexpected sneak peek of how its estimates of national GDP for the U.S. will be officially changed when the agency releases is annual revisions for that data during the last week of July 2016.

The following picture is then displayed.

Ironman tries to track down the potential reasons for the differences; one is highlighted in the footnote which indicates that the sum of the state level variables doesn’t take into account overseas (mostly military) activities. He also takes note the fact that the state level series incorporates data yet to be incorporated into the GDP benchmark revision in July. He concludes:

That’s really weird. It’s a lot harder for the BEA to disentangle the state level contributions by industry from their national level source data, but once it’s done, it means that they’ve also updated and revised the national level data per all the most recently available information. It just doesn’t make sense to sit on that much revised data and not update the national level figures to reflect the entire scope of all the revision work that has been done.

What that means is that there will very likely be an ongoing discrepancy between the state-level GDP and its rollup to the national level, and the BEA’s reported national level data. The two datasets should largely match, except for that contribution by U.S. contractors who support U.S. military operations overseas, which falls outside the economic activity that occurs within the 50 states and the District of Columbia as noted by the BEA, and which should only represent a very small fractional contribution to the national GDP figures above the aggregate rollup of state level GDP for the 50 states and Washington DC.

However, I think he did not think deeply enough about the data. If there were massive revisions coming in on the real magnitudes, they almost assuredly would show up in the nominal magnitudes. I plot the nationwide GDP and the sum of the state level GDP in Figure 1. 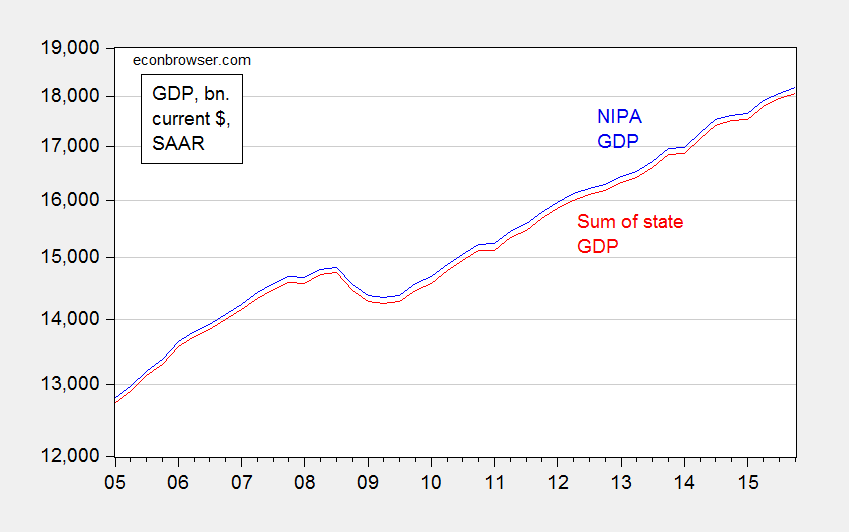 Notice the variation in the difference is pretty small – it never varies more than the range 0.53 to 0.73 percentage points.

This suggests to me that the BEA is reporting for the real US GDP from state data … the sum of state GDP. This can be verified by downloading all the 50 states plus DC data for real GDP, summing them up and comparing to the reported GDP for the nation in the state-level database — and they match At this point, it is relevant to remember that the real GDP at the state level is measured in Chained 2009$, and chained indices do not sum up like nominal magnitudes and fixed weight deflated measures to the aggregate; for more discussion of this characteristic of chain weighted indices, see this post. A Törnqvist approximation would likely have provided a series closer to the nationwide GDP series.

BEA may very well provide a drastically revised GDP series in its annual benchmark revisions. I highlighted how much can be changed when benchmark revisions occur, in this 2010 post. However, I do not think the state level GDP release has given us any particular insight into the likelihood of a big downward revision.

2 thoughts on “No, I Don’t Think This Is the Reason BEA is Predicting a Massive Downward Revision in GDP”