Bruce Hall says changing dynamics in Kansas have meant that a simple average difference (what I’ve called a individual state fixed effect) in Kansas-US unemployment rates is misleading — or more succinctly put, “the average obfuscates the trend”. So, I allowed a time trend and a square in time trend, in a regression over the 1976-2010 period (data series start in 1976; Brownback takes power in 2011). The t-stats on both coefficients are highly significant. Here is a picture of actual Kansas-US difference and the quadratic trend. 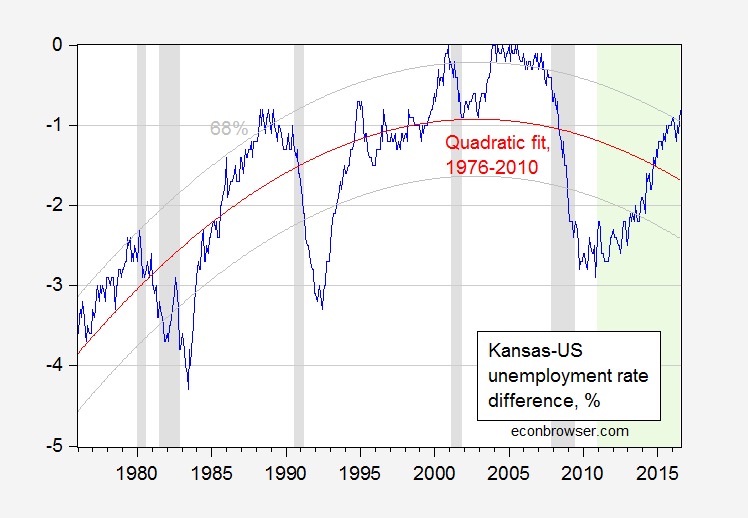 Kansas’s unemployment difference is 0.9 percentage points higher than “normal”, where normal is defined by historical correlations over the 1976-2010 period.

In incorporating a quadratic in time trend, I am allowing for slow moving demographic changes to move the expected difference. One could add in a higher order polynomials in time — adding a cubic would increase the R2 statistic marginally, but would increase substantially (try it yourself!) the implied negative performance of Kansas relative to the US.

In any case, in evaluating performance, I’d say deviations from a level – as in Kansas employment relative to predicted, when long term trend movements are accounted for in a cointegration framework – is a better metric than a difference in a ratio from another ratio (which is what an unemployment rate is). Especially when at the state level the unemployment rate is very imprecisely measured.

I await the next re-interpretation of Kansas economic conditions with bated breath. 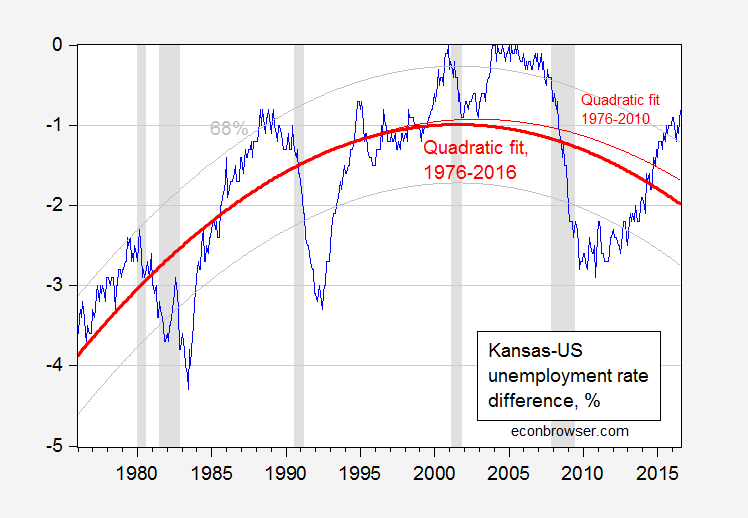 11 thoughts on “More on the Kansas-US Unemployment Rate Difference”