Mark Thoma comments on the impact of the likely dollar appreciation:

A stronger dollar will make imports cheaper for American consumers…The U.S. economy is now strengthening and approaching full employment, but it’s not quite there yet. So I expect the stronger dollar to have some employment effects, but I don’t expect them to be substantial…

so that it’s a wash for the average household — but he adds the caveat:

But that’s an average across the entire population. If you’re one of the workers who loses a job due to the strengthening dollar and are forced to seek employment elsewhere, the costs could be considerable.

I thought it of interest to highlight what happened around the previous two periods of sustained dollar strengthening. 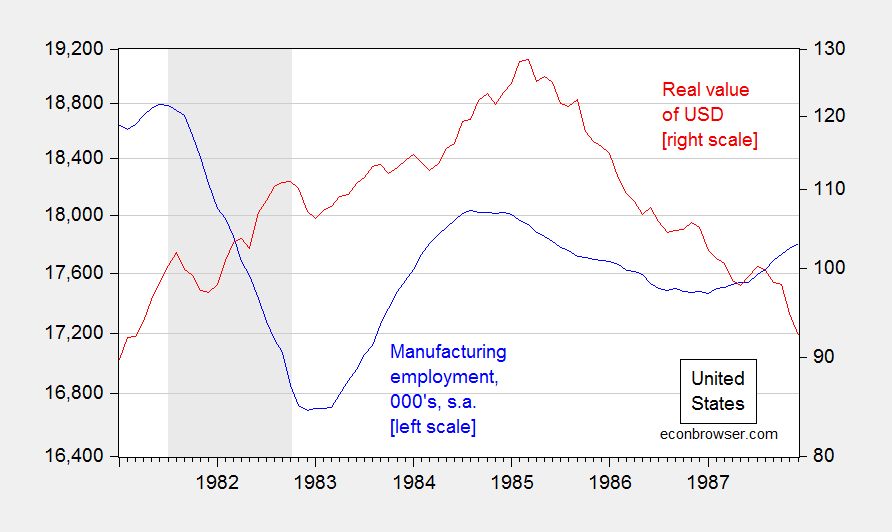 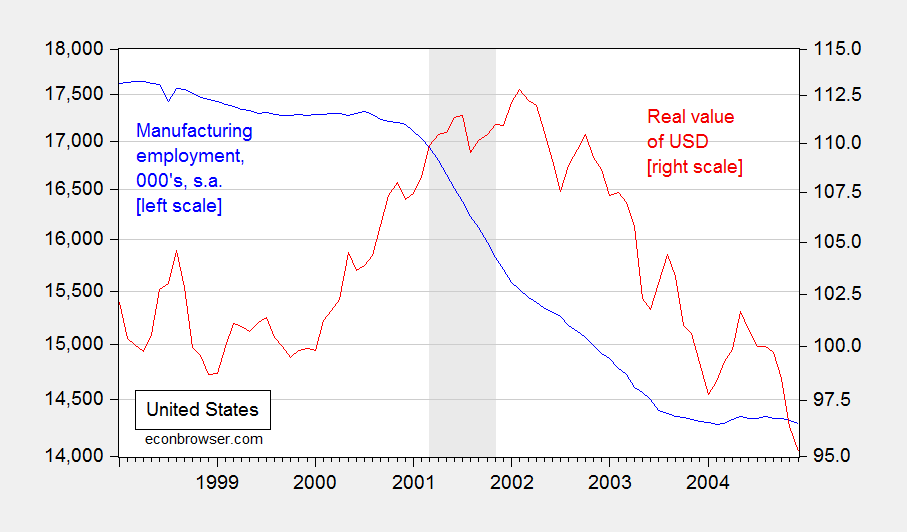 It looks like manufacturing employment responds negatively to dollar appreciation. Work by Campa and Goldberg (2001) examining two decades of data (1972-95) encompassing the 1980-85 dollar appreciation found little effect on net employment, although there were substantial reallocation effects (and did find effects on wages). Klein et al. (2003) examined a similar period, but distinguished between trend and cyclical components of dollar movements (where cyclical components are estimated using deviations from deterministic time trends). They found a significant negative impact on employment by way of job destruction due to cyclical appreciation. (See also this guest post that argues the dollar appreciation is mismeasured, biasing downward estimates of job effects.) 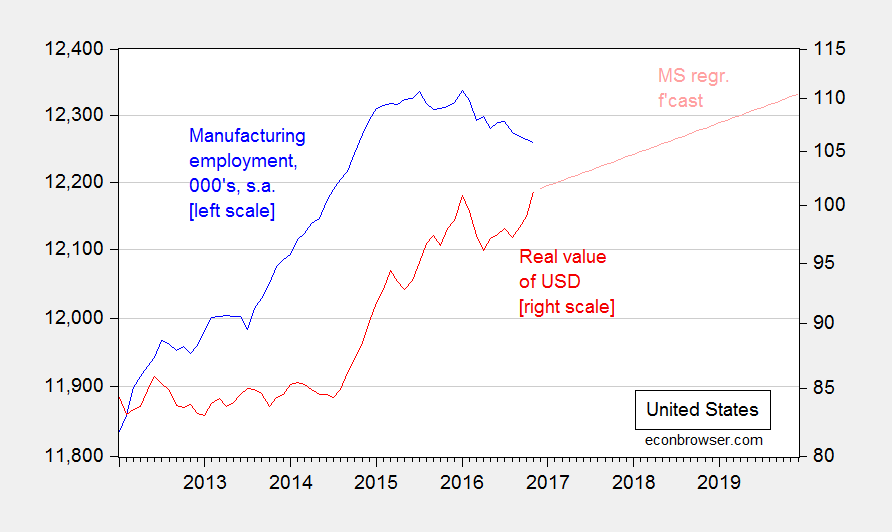 Obviously, we don’t know how much further the dollar is going to appreciate. In this post, I calculated an incremental 10% appreciation in about 3 years (that’s using the implied reversion coefficients from the error correction model), above and beyond what was going to happen (i.e., the counterfactual). Another approach is to extrapolate the continuation of the dollar cycle; I do this formally by estimating a Markov switching model on the first log difference of the real dollar, allowing the constant to change between two regimes, using quarterly data (see discussion of this methodology in this post). I then simply assume the appreciation-regime rate of appreciation continues indefinitely. This yields the pink line in Figure 3; in about 3 years, this implies an additional 10% or so appreciation.

The bottom line: Since the long run cointegrating relationship between log manufacturing employment and the log real value of the dollar is about 0.156 (holding constant non-manufacturing employment, and allowing a trend in the cointegrating vector), then one should expect a roughly 1.6% reduction in manufacturing payroll employment relative to what would have otherwise would have occurred. Using November 2016 figures (12,260,000), that implies an additional loss of about 200,000 in employment. If the impending fiscal stimulus is sufficiently large, the domestic impulse could offset the dollar-induced employment loss.

5 thoughts on “Manufacturing Employment and Three Episodes of Dollar Appreciation”