“Borrowing and spending by the public sector will crowd out investment and growth in the private sector.” Paul Ryan, “Path to Prosperity” (April 2012).

The reasons why interest rates did not rise appreciably in the wake of the American Recovery and Reinvestment Act included the accommodative Fed policy (see this post for graphical analysis augmented by a very little algebra), and the slack in the economy. Neither of these conditions hold in 2018, so one might think that elevated interest rates due to the massive increase in Federal government deficits and debt will now show up. A recent Goldman Sachs report (Hatzius et al, May 12, 2018) makes this point, as shown in the impulse response functions (IRFs) associated with a 1 percentage point of GDP increase in the structural budget deficit, displayed for below versus at or above potential GDP. 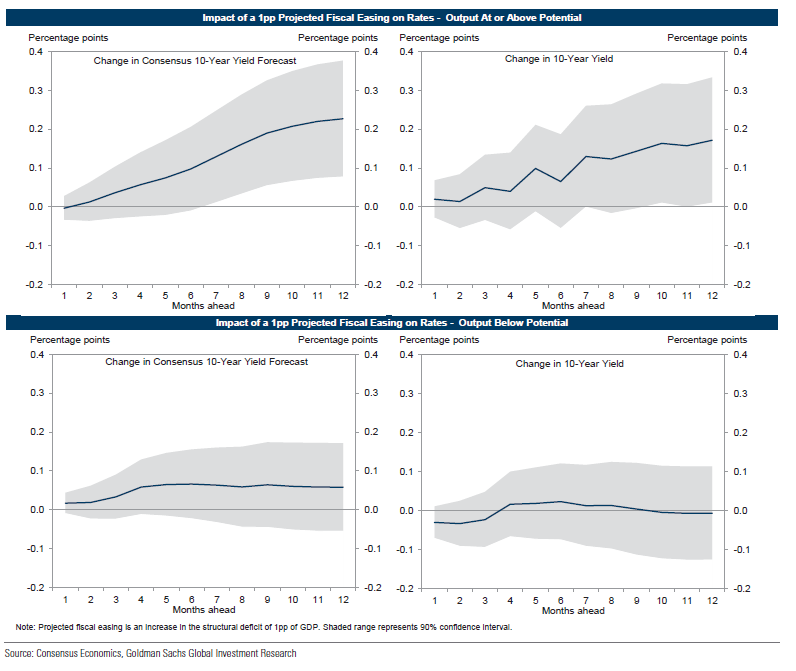 Using other methodologies (including the Laubach approach incorporating expectations of future debt, see Chinn and Frankel (2005) for example), Hatzius and coauthors find a statistically significant positive impact on yields of additional deficits.

38 thoughts on “Maybe We Will Get That Crowding Out That Rep. Paul Ryan Feared”