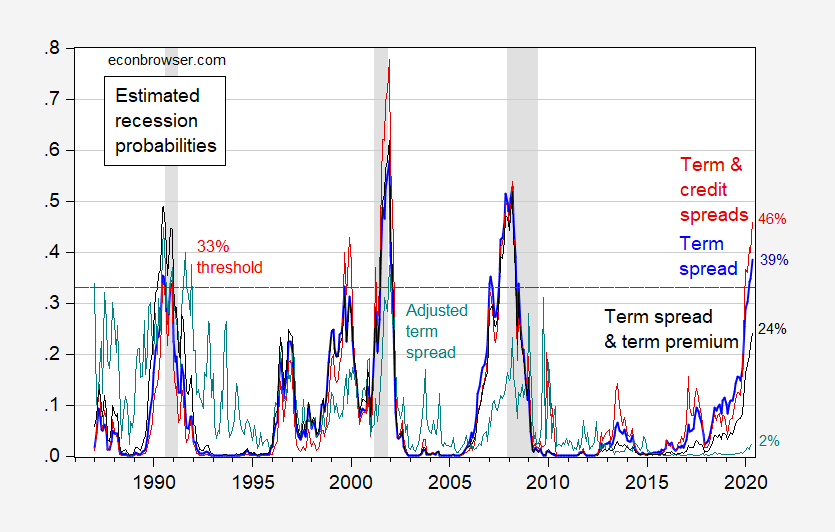 It’s definitely true that the premium adjusted term spread predicts a very low probability (teal line); however using a 33% threshold, that model would have missed completely the 2007-09 recession (i.e., false negative). Of course, using the 50% threshold no recession is imminent.

Note that using a 33% threshold and the simple term spread model (blue line) would suggest a recession in 2020, while not sending a false positive for late 1999. The term and credit spread model (red line), while fitting well, would’ve provided a false positive for late 1999 using that same 33% threshold. (A good recent survey and evaluation of competing spreada models is provided by David Miller in FEDS Notes.)

What about the indicators the NBER BCDC follows? 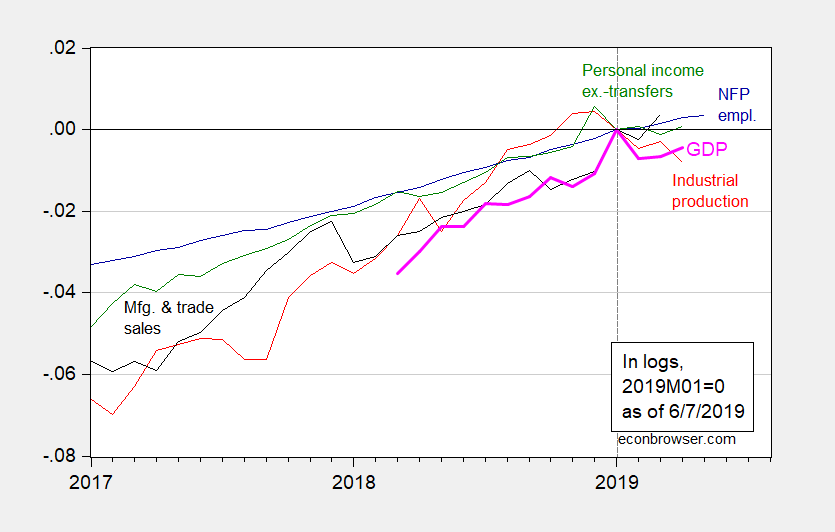 Nowcasts extending out to 2019Q3 all suggest a slowdown (as indicated in flattening trajectories in GDP in Figure 3), but not necessarily a recession (no negative entries in Figure 4). 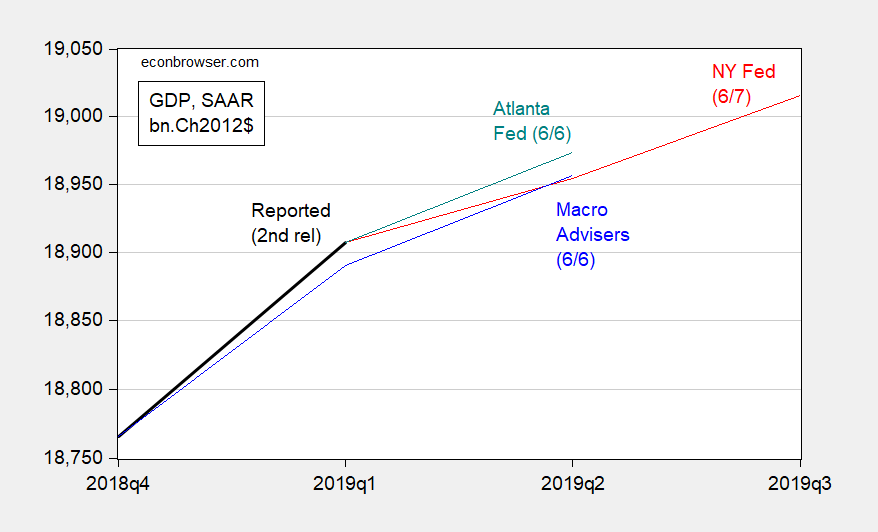 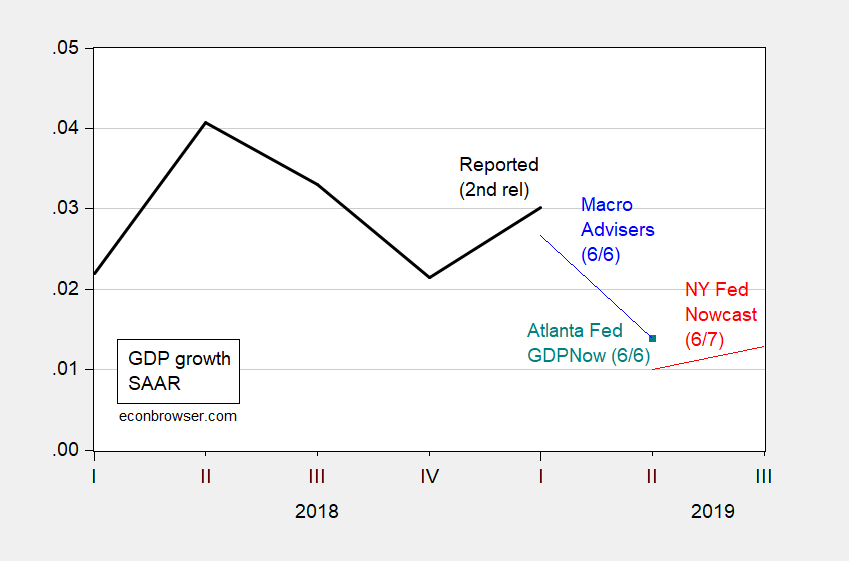 All economic activity depends on expectations of future variables — including asset prices, which is why the expectations hypothesis of the term structure is useful. However, some components of aggregate demand are more sensitive to expectations — both mean, variance, and uncertainty — than others. Investment — particularly equipment — is an obvious example; so too is housing investment. 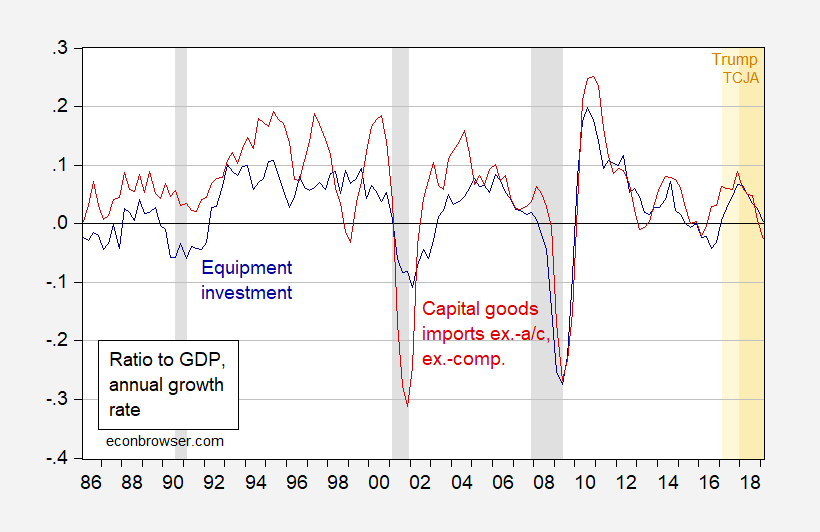 Equipment investment is now flat y/y. Imports of capital goods aside from computers and aircraft and aircraft parts are now decreasing, although it’s hard to say how much of this is due to tariffs. While both series predict recessions (McFadden Rsquared equal to 0.36), the implied recession probability is only about 5% in one year (see this post). 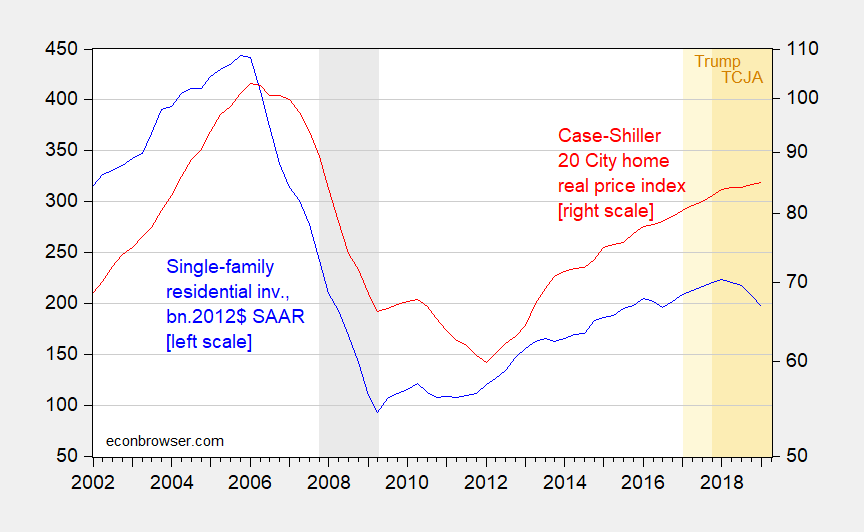 What about Leamer’s thesis of the business cycle as housing cycle? In the last recession, investment and real house prices peaked about two years before the onset of the recession. Real investment peaked in 2018Q1. Real housing prices, on the other hand, have not yet peaked.

The Case-Shiller indices only go up through March. Looking at the monthly Zillow price indices, which extend through April, one can see an apparent peak: March for nominal, February for real. 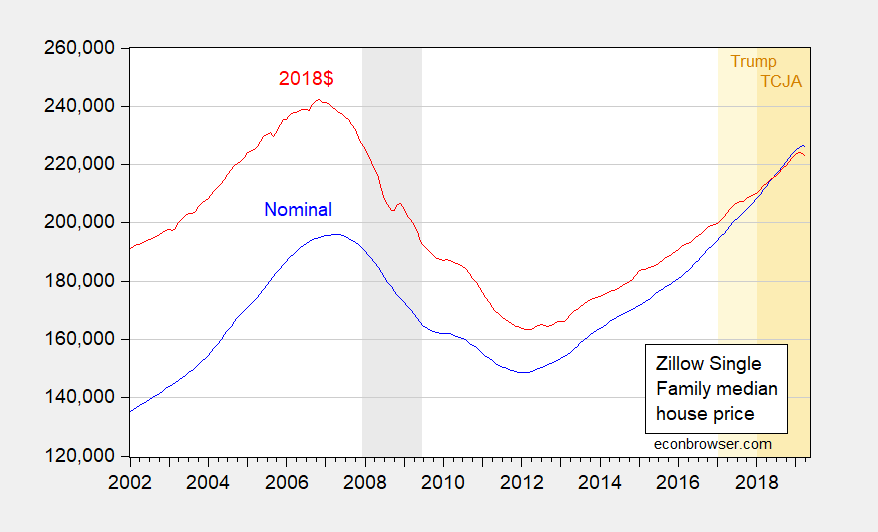 Moreover, in the top 12 home markets, 11 are experiencing decreasing prices from March to April (the largest — New York city — is flat).

Interestingly, the Zillow index (which differs from the Case-Shiller, see discussion here) peaks one year before the recession. If we get a repeat performance, the recession begins in February 2020.