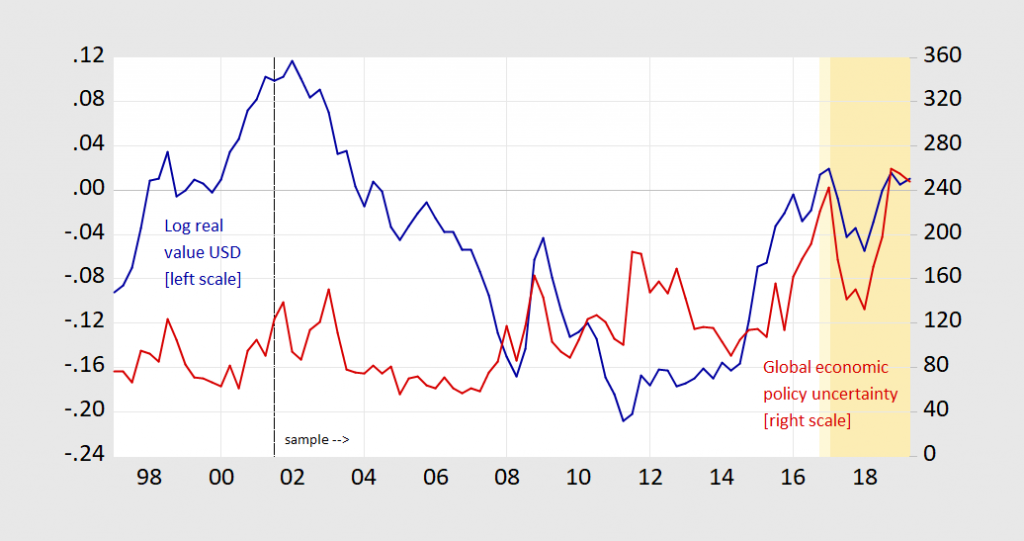 Suppose you thought a hybrid real interest differential/Taylor fundamentals model worked for explaining the real trade weighted dollar. One might estimate over the 2001Q3-2019Q1 period the following:

Where r is the log real trade weighted value of the US dollar against a broad basket of currencies (r increase implies appreciation, 1973M03=0), π is one-year inflation, y is log real GDP, i is the 10 year nominal interest rate, and epuGlobal is the log Economic Policy Uncertainty global index, market GDP weighted from Baker, Bloom and Davis. RoW is the rest-of-the-world, all RoW data from Dallas Fed DGEI. Interest and inflation rates are in decimal form (10% = 0.10).

The coefficients match up roughly with theory — or at least a theory. Higher inflation relative to the rest-of-the-world weakens the dollar, higher relative US GDP and higher US long term interest rates appreciate the dollar. Most significantly, a greater degree of global economic policy uncertainty, as measured by the Baker, Bloom and Davis methodology, strengthens the dollar.

What can we say about the Trump effect? In general, Trump’s economic policies have involved (1) increased fiscal stimulus via the Tax Cut and Jobs Act (TCJA), (2) stimulus via the budget agreement which relieved spending constrainst, (3) higher long term interest rates due to increased borrowing, and higher short interest rates due to Taylor rule induced Fed tightening, and (4) elevated global economic policy uncertainty. Armed with the estimates in the estimated regression equation, one can tabulate the impact on the value of the US dollar.

The combined TCJA and budget agreement induced an increase in GDP relative to otherwise of between .43 or 1.86 percentage points (depending on state dependent or linear multipliers, according to Cohen-Sutton et al. (2018). That implies roughly 0.4 to 2 percentage points appreciation of the dollar by mid-2019 — not major. The fiscal stimulus would’ve also put on upward pressure on interest rates, so long term US interest rates would’ve likely been lower than recorded. CBO (2017) estimated a 0.2 ppt increase in 10 year rates associated with TCJA along. That implies a 2% appreciation of the dollar, from TCJA alone.

The big impact is from the uncertainty channel. Over the 2017Q1-2019Q2 period, global economic policy uncertainty is 60% higher (log terms) than that recorded over the 2001Q3-17Q4 period (from regression of log EPU on constant and Trump dummy). With a log(EPU) coefficient of 0.2, that implies a 12% appreciation ( 0.6 x 0.2 = 0.12) of the US dollar from the uncertainty channel alone. Of course, while not all of global economic policy uncertainty is due to Mr. Trump, a large portion does seem attributable to particularly the trade policies of the Trump administration. 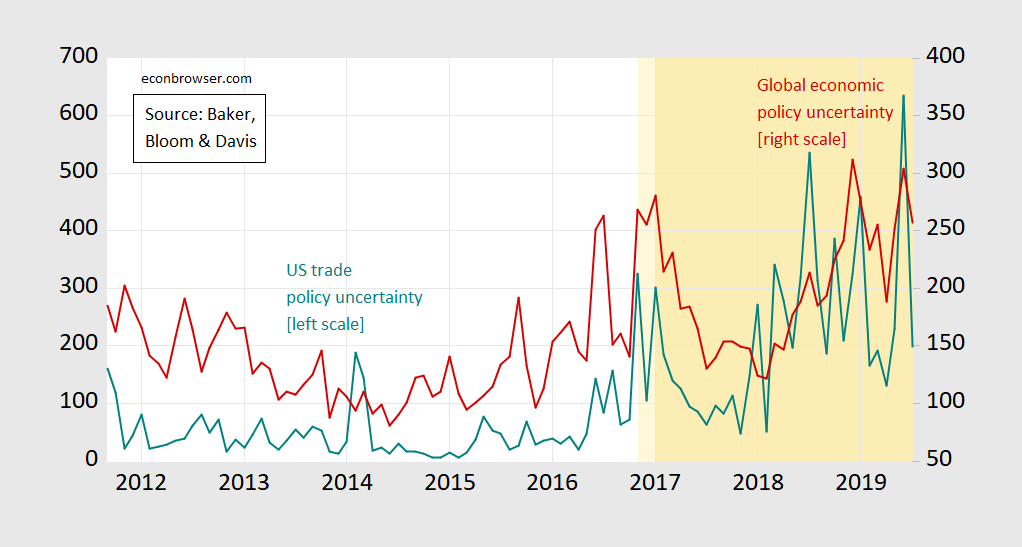 The foregoing implies that, when Mr. Trump searches for villains causing the strong value of the US dollar, he should look to himself for something on the order of 10 percentage points or more of the appreciated value.