Today we are fortunate to have a guest contribution written by Kim Kowalewski, formerly Senior Adviser in the Macroeconomic Analysis Division of the Congressional Budget Office.

The inversion of the yield curve this year has led to a considerable debate about its recessionary signal. Some analysts, including the former chairman of the Federal Reserve, Janet Yellen, think that the recent inversion doesn’t signal a recession in the coming year because they believe that the term premium in long-term interest rates has been pushed down by an unusual set of factors: the quantitative easing policies in the United States, Japan, and Europe, by safe-haven demands for Treasury securities, and by a low risk of an increase in inflation.[1] That is, those unusual factors have led to an unusual inversion of the yield curve this year. Other analysts believe that the yield curve has signaled a significant risk for a recession in the coming year.[2]

How the Yield Curve Has Inverted

The data are monthly values of the constant-maturity, 10-year Note rate and the secondary market, 3-month Bill rate.[3] I use the spread of those rates because researchers at the Federal Reserve Bank of San Francisco found that spread to be the best predictor of recessions.[4]

I examine how the yield curve has inverted during eight episodes since the early 1970s. The end of an episode is the lowest value of the term spread for the episode and the beginning as the previous peak value of the spread, ignoring temporary (within a year) and relatively small (less than 60 basis points) reversals of the spread. Of the eight episodes, six end when the term spread was negative on a monthly average basis, and two, one in the late 1980s and the other in the late 1990s, end when the term spread was a very small positive value on a monthly average basis. I consider the latter two episodes to be inversions because the term spread was negative on a number of days around the month when the term spread was at the local minimum.[5] In many cases, the previous peak is not the maximum value during the expansion in order to abstract from cyclical forces acting on the term spread in recovery and early expansionary periods. While the beginning months of the episodes are somewhat arbitrary, the qualitative results are not sensitive to the choice of beginning month. The inversion episodes are shown in black in the figure below (the shaded bars indicate recessions as defined by the National Bureau of Economic Research).

With the episodes identified, I calculate the component changes in the two interest rates from the beginning to the end of each episode. For example, in the case of the recent episode, the end (so far) occurred in August 2019, when the term spread was ‑0.32, and the beginning of the inversion occurred in December 2016, when the spread was 1.98. During the recent episode, the 10-year Note rate fell from 2.49 to 1.63, and the 3-month Bill rate rose from 0.51 to 1.95.

I show the changes in the 10-year Note rate and corresponding changes in the 3-month Bill rate for the eight episodes in the scatterplot below. The y-axis shows the change in the 10-year Note rate and the x-axis shows the corresponding change in the 3-Month Bill rate. The data labels indicate the beginning and ending months of each episode. The scatterplot also shows the linear regression line based on all but the latest episode in the estimation sample. 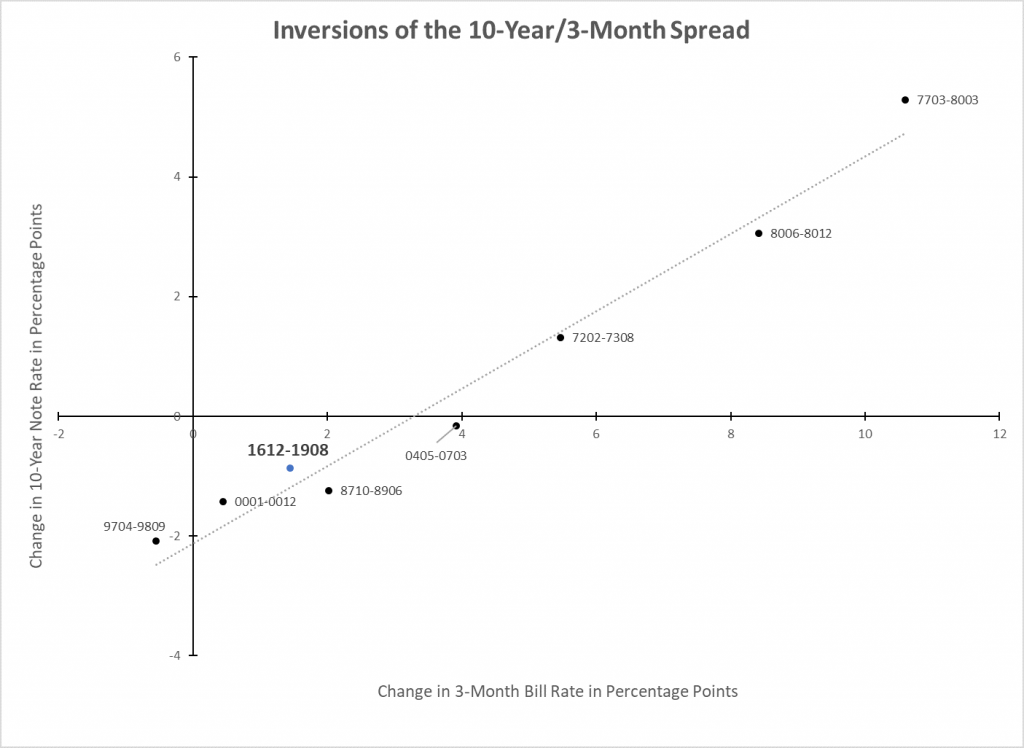 That rather surprising figure makes two points. The obvious point is that there is a remarkably close relationship between the changes in the two rates during the inversion episodes. That relationship appears to hold for inversion episodes when the 10-year Note rate rose, as it did during the episodes before the late 1980s, and when the 10-year Note rate fell, as it did during the episodes since the late 1980s. I found that result very surprising given the many changes in financial markets and international capital flows since the early 1970s.

When the Yield Curve Has Inverted

What I mean by when the yield curve has inverted is the state of the business cycle at the time of the inversion. If the recent inversion has been abnormal, then it might bear a different relationship to the state of the economy than in the past.

The figure below shows that the economy was relatively strong when the yield curve was inverted or nearly inverted on a monthly average basis.[8] During periods (the shaded areas) when the term spread was negative or close to zero, the output gap was positive or close to zero. In the past year, the inversion of the term spread also coincided with a positive output gap, indicating that the recent inversion is not necessarily unusual given the state of the business cycle. 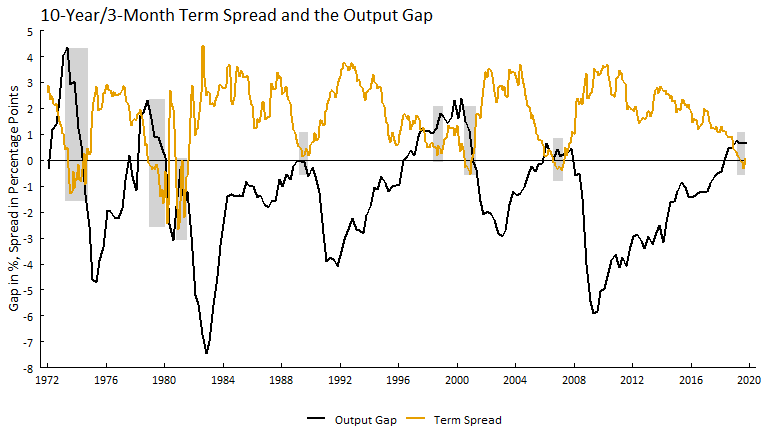 My simple data analysis suggests that the inversion this time is not so different. It is by no means definitive, of course, but the case for an abnormal inversion this year would have been stronger with findings opposite of mine. My analysis also suggests that we should not dismiss the estimates of recession probabilites over the coming year using the 10-year Note/3-month Bill spread.

[2] Menzie Chinn showed that the slope of yield curve still is a good recession predictor after taking account of the term premium: (https://econbrowser.com/archives/2019/08/an-ad-hoc-term-premium-adjusted-term-spread-recession-model). Note that his adjustment uses the whole term premium, not just the portion due to the unusual factors. Menzie’s latest recession probabilities are here: http://econbrowser.com/archives/2019/11/recession-probabilities-september-october-2020. Campbell Harvey is skeptical of the view that ‘this time is different’: https://www.linkedin.com/pulse/time-different-yeah-right-campbell-harvey/. Researchers at the Federal Reserve Bank of San Francisco also found that the term spread adjusted for the (whole) term premium is a less accurate predictor of recessions than is the unadjusted term spread: (https://www.frbsf.org/economic-research/publications/economic-letter/2018/august/information-in-yield-curve-about-future-recessions/).

[3] The data come from the Federal Reserve’s H.15 release: https://www.federalreserve.gov/releases/h15/.

[4] See the reference in the second footnote.

[6] For what it’s worth, a Chow test indicates that the regression coefficients are not different with 95% confidence when the recent observation is added to the regression sample.

[8] The term spread is shown on a monthly basis and CBO’s estimate of the output gap on a quarterly basis.

49 thoughts on “Guest Contribution: “Yet Another Look at the Recent Inversion of the Yield Curve””