Today, we are pleased to present a guest contribution written by David Papell and Ruxandra Prodan, both of the Department of Economics at the University of Houston.

Even as the US economy plunges into recession, there has been a great deal of interest regarding the shape of the recovery from the coronavirus pandemic if and when potential GDP returns to its trend path following the trough of the recession. Will it be V-shaped with a quick recovery, L-shaped with no recovery, or U-shaped with a prolonged bottom after the trough followed by a fast recovery. These choices have been discussed by Menzie Chinn, John Cochrane, and Janet Yellen.

The BlackRock Investment Institute has proposed a different scenario (presented below) where, while GDP eventually returns to potential, the recovery is much slower than with a V-shaped recovery. We propose that this type of recovery should be called J-shaped. The terminology comes from the J-Curve, where a devaluation first causes a trade deficit before reversing itself. As with the J-curve, the recovery part of the J is tilted to depict the long return. 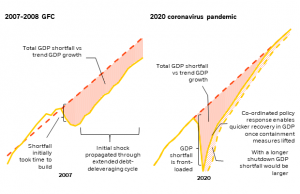 Severe recessions following financial crises provide historical evidence for J-shaped recoveries. We presented a paper, “The Statistical Behavior of GDP after Financial Crises and Severe Recessions,” at the 2011 Boston Fed Annual Research Conference, the proceedings of which were published in the October 2012 BE Journal of Macroeconomics and summarized in an Econbrowser post on October 24, 2011. We use structural change tests to estimate how long, if ever, it takes to return to the trend path of potential GDP following severe recessions associated with financial crises. In contrast to the V-shaped recoveries that characterize US recessions between World War II and 2008, the recovery from these recessions takes much longer. We consider recoveries from five severe European recessions characterized by a sharp drop in GDP analyzed by Carmen Reinhart and Ken Rogoff in their 2009 book, “This Time is Different, as well as the Great Depression in the US. While potential GDP is eventually restored, the return to the trend path takes an average of nine years. We later used the same methodology to analyze the recovery from the Great Recession in a February 17, 2015 Econbrowser post. In contrast with previous experience, the recovery is L-shaped with potential GDP never restored.

18 thoughts on “Guest Contribution: “Will the Recovery be J-Shaped?””