I talked about infrastructure investment and taxes on WPR  yesterday. Will higher corporate tax rates and closing of loopholes in the taxation of corporations  raise prices of goods produced? Given what happened in the wake of the 2017 reduction in corporate tax rates (i.e., lots of stock buybacks, not much higher investment), I think a resulting price increase not likely. On the other hand, the infrastructure spending could have an impact on productivity and hence prices.

And infrastructure spending has been pretty low… 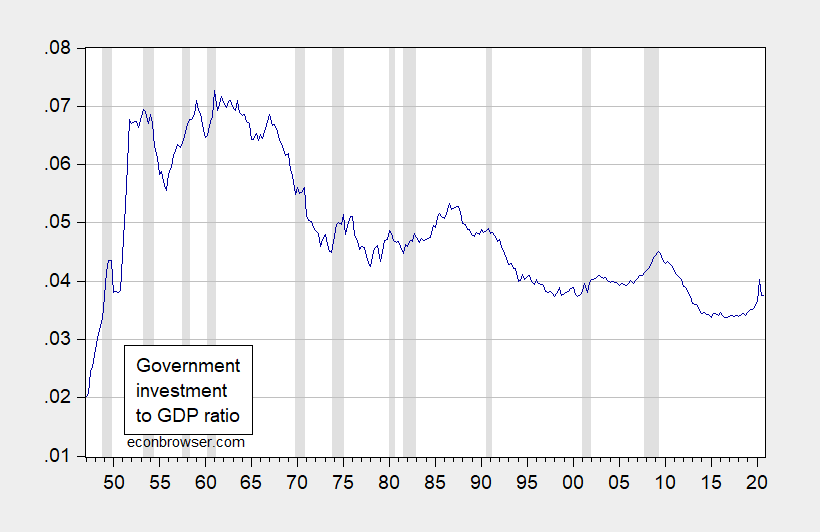 The big question is whether the proposed tax rate increase along with revisions to the measures related to international income taxation will do the trick in terms of raising sufficient revenue.

President Biden has proposed several changes to corporate taxes to raise revenue for his infrastructure plan. The biggest  change from a revenue standpoint would be to raise the  corporate income tax rate to 28% from 21% . A general rule of  thumb is that a one percentage point increase in the corporate  income tax equates to approximately $100 billion of new revenue per year, and most independent estimates are in the  ballpark of this rule (Figure 2). Beyond just taking the corporate
rate higher, President Biden has also proposed some other  corporate tax policy changes such as introducing a 15%  minimum tax on corporations’ “book income”, doubling the  rate on global intangible low-taxed income (GILTI) to 21% from  10.5%, assessing the GILTI rate on a country-by-country basis
and eliminating the qualified business asset investment (QBAI) exemption.

The AJP also mentions eliminating the tax incentives for foreign  derived intangible income (FDII), but it goes on to state that “all  of the revenue from repealing the FDII deduction will be used to  expand more eective R&D investment incentives,” so we  assume that this proposed change does not include any
net new revenue. In addition, the plan also mentions a few  other smaller changes, such as more robust tax enforcement  and ending “tax preferences for fossil fuels,” but we anticipate  that these changes would likely be relatively small from a  revenue standpoint.

112 thoughts on “Infrastructure Investment and Taxes”