Results from the survey (taken June 6-8), re: GDP, prices, recession: 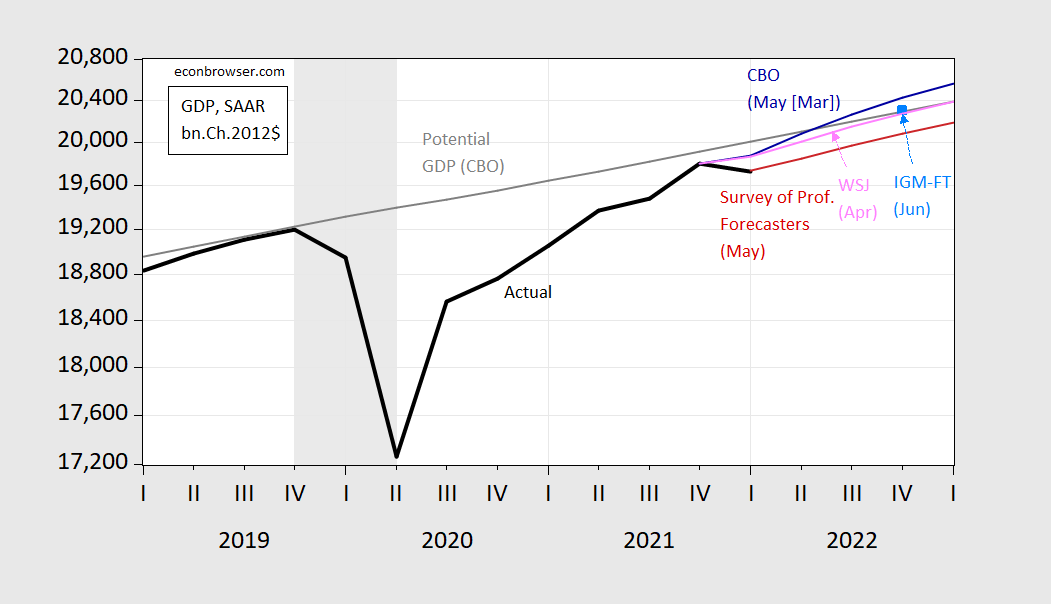 Note that, unlike previous episodes, the IGM-FT median survey and the SPF survey differ noticeably in terms of the levels of GDP. The WSJ mean and IGM-FT median don’t differ much (for end-2022), but that hides the fact that the IGM-FT forecast incorporates the Q1 negative growth which was not known as of the WSJ April survey. Hence, in this sense the IGM-FT median forecast represents a considerably more optimistic outlook than represented by WSJ and SPF respondents.

The CBO forecast is more optimistic than the other forecasts — but it’s important to recall the CBO forecast was locked down using data up to March 2nd (which is why it’s listed as May [Mar]) in the graph.

Interestingly, using the SPF or IGM-FT forecasts and the CBO measure of potential GDP, one doesn’t see a big positive output gap either now or by year’s end. Taken literally, this suggests demand push factors are not the key to the inflationary surge. Of course, CBO’s estimate could be wrong (i.e., over-estimated). One can’t argue that that the demand surge took place against a potential GDP level that was overestimated, as the May 2022 vintage has higher levels than the July 2021 vintage, at least over 2021.

The average of 10th/90th percentile range the IGM-FT respondents provided is shown below. 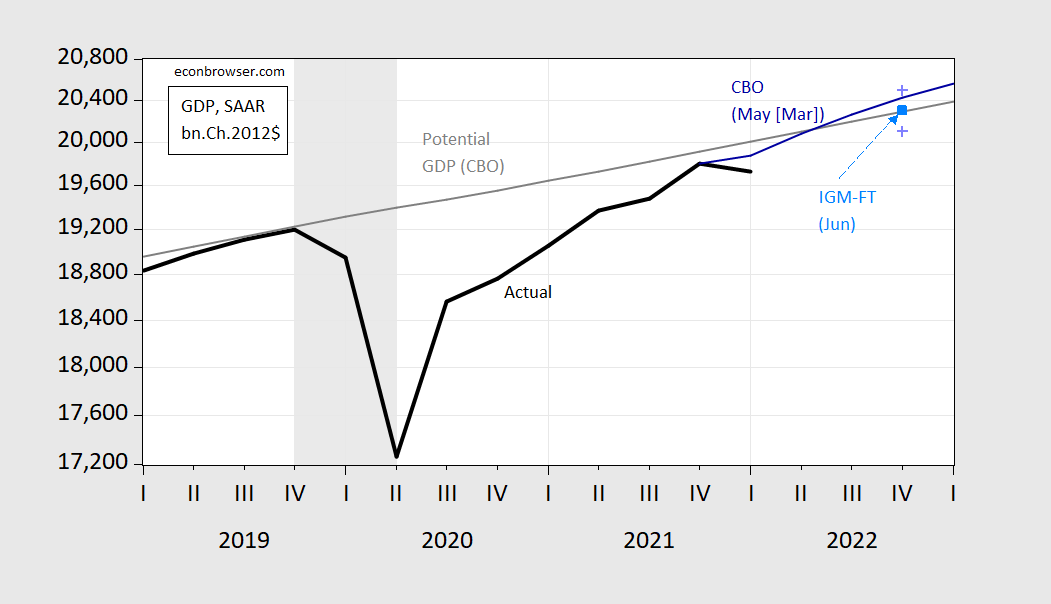 As for the likelihood of recession, here’s where the respondents place the likely start date. 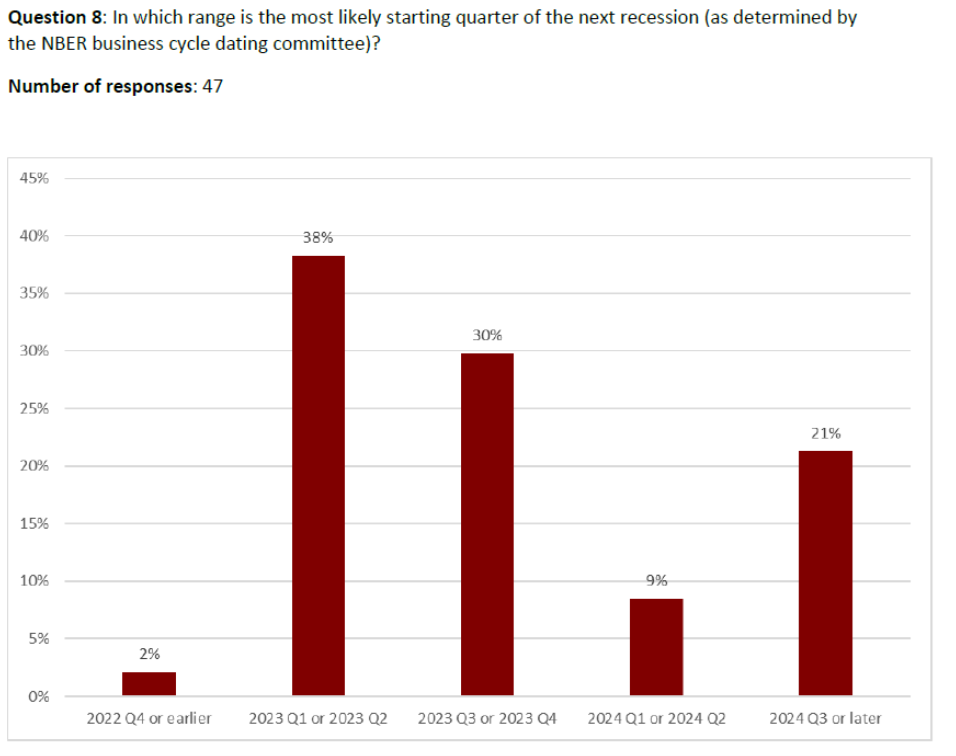 The modal response is 2023Q1-Q2; interestingly, this is earlier than 2023Q3-Q4 as predicted by Deutsche Bank. As I noted in May, probabilities using a plain vanilla term spread model can yield wildly different results if one uses the 10yr-3mo or 10yr-2yr, with the 10yr-2yr producing a much higher probability. Rashad Ahmad’s model, using offshore yield curves, gives much higher probabilities (although the elevated probability is driven by financial conditions and oil prices).

What about inflation? Here’s a graph of the PCE deflator and the median forecast from the IGM-FT survey. 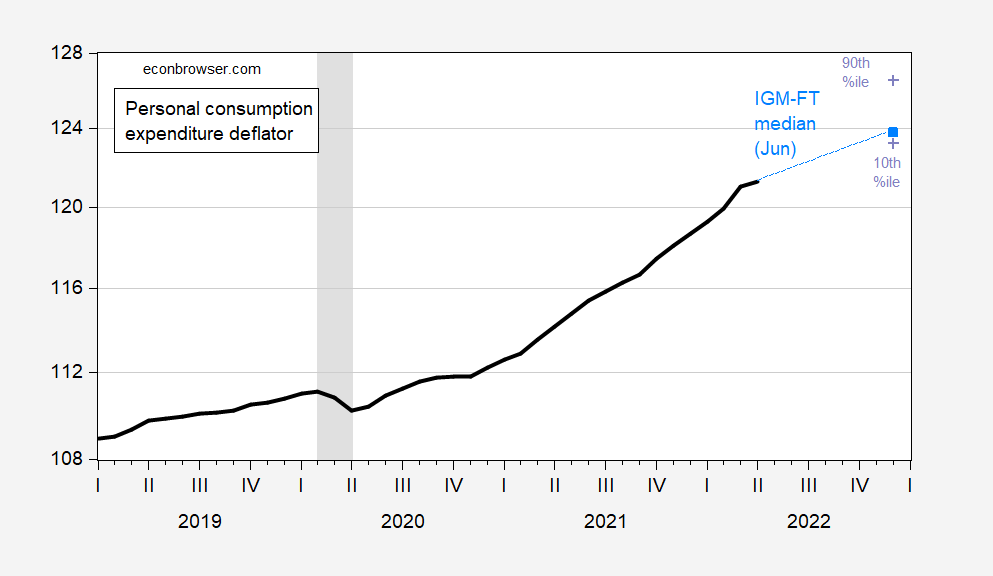 The median forecast implies 5.07% m/m annualized inflation for May through December (note we only have April’s number as of today). That is slower than the 6.1 y/y inflation rate over the preceding 12 months (both numbers in log terms).

As for upward inflationary pressures over the next twelve months. the survey respondents indicated geopolitical tensions were likely to be the main culprit. Coming in second as a primary driver was supply chain issues. 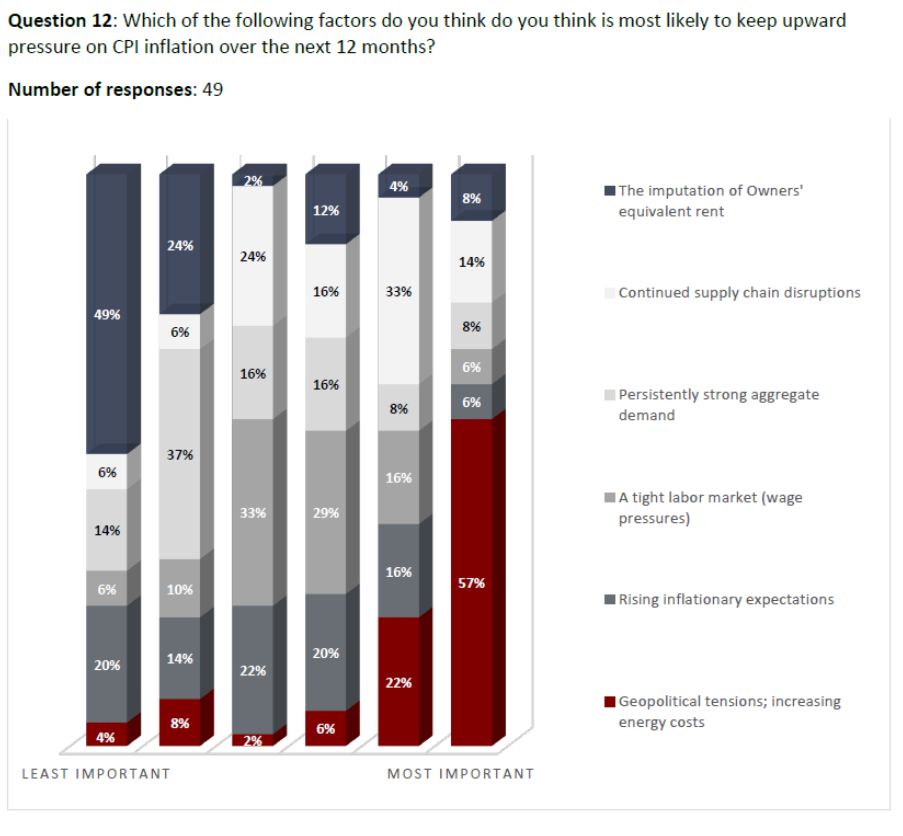 Excess aggregate demand accounts for only 6% of the responses, suggesting demand pull factors won’t be central in driving inflation over the next year.