Neil Irwin at the NYT has an interesting article on the localized recession in 2016. One conclusion he makes:

“There is a risk that the intensification of international cross currents could weigh more heavily on U.S. demand directly, or that the anticipation of a sharper divergence in U.S. policy could impose restraint through additional tightening of financial conditions,” she said on Oct. 12 in Washington.

I agree. Here is my take from the end of 2015, in “The Opening of the American Macroeconomy and the Implications for Monetary Policy“:

Or, why I think Governor Brainard is right to say it’s too soon to tighten.

Tim Duy’s interpretation of the last FOMC statement as a dismissal of international concerns as laid out by Governor Lael Brainard is troubling.

The removal of international factors from the statement reminds me that we ignore the external conditions at our peril (see also Krugman’s take). Here’s a cautionary tale from my youth.

Thirty five years ago, I took my first course in intermediate macroeconomics. Professor James Duesenberry, a developer of an precursor to the model of habit formation in consumption theory [1] (the “habit theory”), was the instructor, and on the day after Ronald Reagan’s election, he took time out from the course to discuss the macroeconomic implications of the new president’s program of massive supply-side tax cuts and elevated defense spending on the US economy. He predicted – rightly – that purported unicorn-like (my words) supply side surges in tax revenue would not appear; he also predicted – rightly – that there would be massive crowding due to the collision of fiscal and monetary policy. Where he was wrong was where the crowding out would occur: it occurred in net exports, rather than in investment. I wonder if policymakers — particularly those schooled in thinking of America as a closed economy — are again about to under-estimate the openness of the US economy.

Here are some observations to keep in mind:

During the mid 2000’s, net exports increased to record share of GDP – nearly 6%, dwarfing the international sibling of the “twin deficits” of the 1980’s experienced under Reagan. More importantly, the economy is more open: exports plus imports as a share of GDP is now around 30%, as compared to 25% between the previous two recessions, as shown in Figure 1. 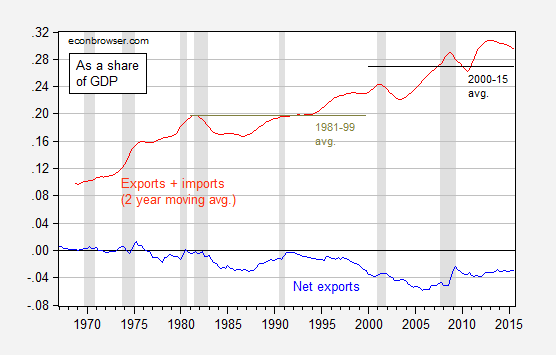 2. The relative importance of the contribution of net exports to growth has increased over time. 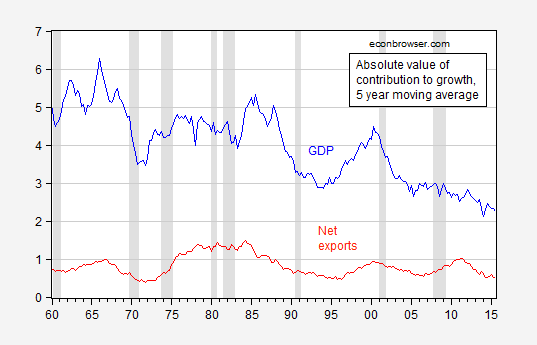 3. The responsiveness of trade to exchange rates has risen

US exports and imports also appear to be more responsive to exchange rates than they were in previous periods. Hence, the observation that the recent appreciation has not reached heights recorded in the early 2000’s and in the mid-1980’s is not necessarily sufficient to dismiss worries. In this post (extended in Chinn (2010)) I report estimates that indicate that export price (exchange rate) elasticities are greater in the more recent period than in earlier; similarly IMF (2007) (Table 3.2) finds that price elasticities are higher over the 20 year period up to 2006 as compared to the entire 33 year period.

In this context, the 15% appreciation in the real value of the dollar, against a broad basket of currencies, shown in Figure 3, takes on greater significance than it might have in times past. 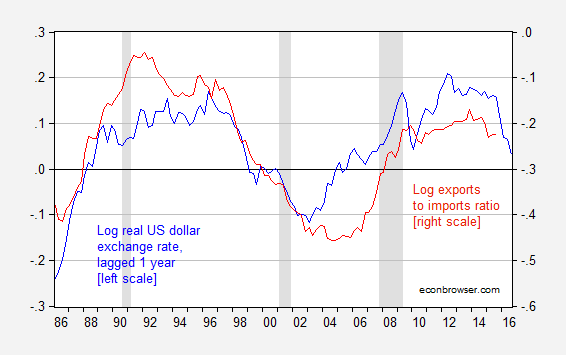 The impact of the rapid appreciation is yet to have shown up in exports and imports, if the past is any guide. Moreover, with the continuation of quantitative easing in the euro zone and the continued financial turmoil in China, there is little to suggest the dollar’s appreciated value will disappear anytime soon.

There is some indication of the dollar’s impact in indicators of tradables — approximated by manufacturing — activity. 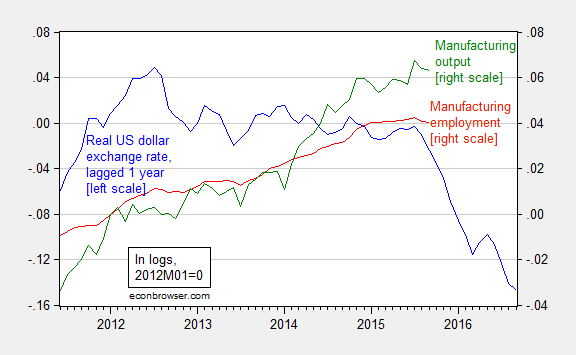 With the US economy already exhibiting weakness, and the global economy in flux [2], it hardly seems the right time to appreciate the dollar, which tightening would likely do.