For few months, a recurrent economic issue is the possible U.S. economic recession in 2020 (see discussions on Econbrowser here and here). But there are also some similar questions in the euro area about potentially upcoming recessions, especially in Germany, an open economy that heavily depends on the global business cycle.  In this post, I propose to assess the German business cycle based on standard tools often used in the business cycle literature.

Predicting recessions is one of the biggest challenge for economists and even trying to identify recessions in real-time is not an easy job. A first step is to be able to date historical business cycles, defined as the sequence of expansion and recession phases. A rule of thumb is to say that a country is in recession when it experiences two consecutive quarters of negative GDP growth. But in fact identifying a recession is a much more complicated task and needs to refer to the original NBER definition.

A simple tool that proved to work quite well in the literature to date turning points is the Bry and Boschan (1971) algorithm that identifies peaks and trough in macro series by using simple rules, especially imposing minimum durations of phases (2 quarters) and cycles (5 quarters, from peak to peak of trough to trough). Very often an additional filter is applied to the resulting chronology in order to ensure that the recession is severe enough, severity being measured by 0.5 times the loss in output times the duration of the phase.

It is noteworthy that the algorithm does not detect any peak over the recent quarters. Note also that the plain vanilla Bry-Boschan algorithm also provides two additional recessions in 1985-86 and 2004-05. However, the severity of those 2 specific recessions is so low that I decided to discard them from the chronology.

This dating chronology for Germany is well in line with the CEPR chronology for the euro area business cycle. There is a difference in 2002-2003 when the German recession didn’t lead to recession in the euro as a whole, as the recessions in the main euro area countries were not synchronized. Note also that the CEPR estimate a single recession from 1980 to 1982, while we allow for a double dip, as for the U.S.. The ECRI also provides a dating chronology for Germany but they do not account for the 2012-2013 recession. However, it’s questionable that the euro area as a whole was in recession during this period of time, but not Germany that accounts for about a third of euro area GDP. 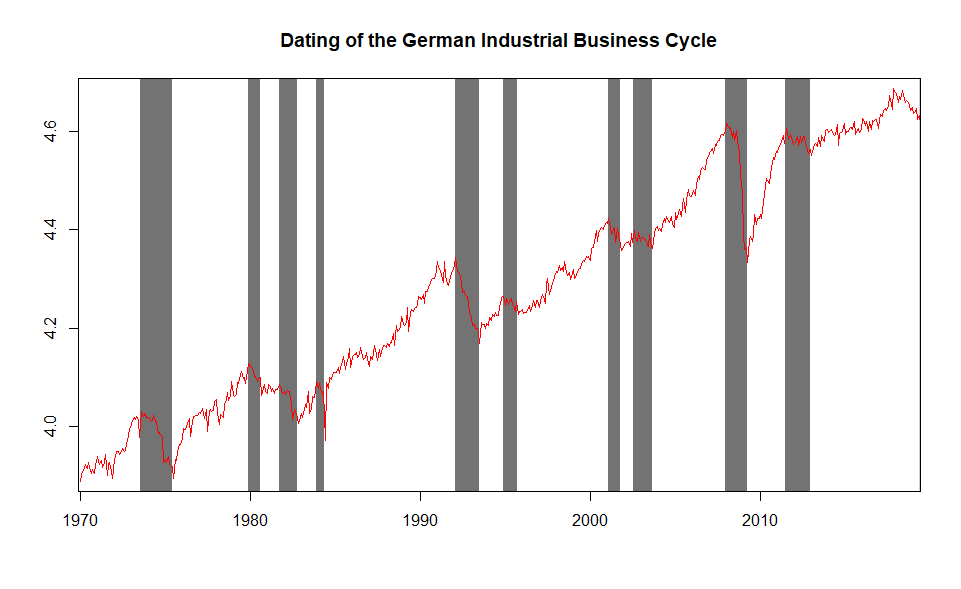 At the end of the sample, the algorithm clearly identifies a peak in November 2017, but the trough is not yet identified, suggesting thus that an industrial recession started in December 2017 and is still on-going.  This story is consistent with the slowdown in the global economy since 2018, fueled by the trade war between U.S. and China and a negative growth in world trade volume in 2019h1 (-0.3% in q1 and -0.7% in q2 2019). 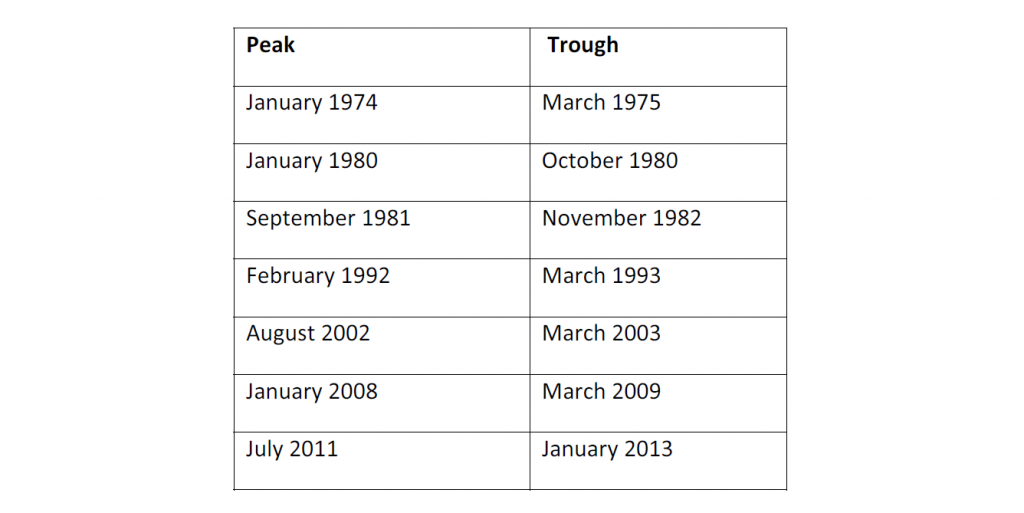 Dating business cycles is not only a pure historical exercise; that’s also useful for predicting recession when using binary response models, as the Probit model. Below we use the spread between long term and short term interest rates for Germany as predictor of recession. We clearly see in the figure below that this spread tends to decline before each German recession.

An estimation of a Probit model based on this business cycle chronology indicates a recession risk of about 25% in 12 months. This high recession risk is consistent with some latest high frequency data, such as new orders in the manufacturing sector.

In conclusion, with the data that we have at hand as today, it seems a bit early to acknowledge a recession in Germany. Officially calling for a recession generally takes some time (the announcement delay of the CEPR for a peak is about 1 year) and more data than GDP and industrial production should also be considered, such as employment data or sales. Also, at some occasions, a recession in the industry didn’t end up into a global recessions. However, the economic outlook in Germany appears to be quite pessimistic and the recession risk is quite high.