When last we checked in on Mr. Moore, he was asserting “Once we get this thing contained…the market and the real economy will burst back to life”. So, it is important to memorialize his prescriptions, to add to his forecast of Covid-19 “containment”.

On point (1), it is hard to see how the tradeoff works. In Eichenbaum et al. (2020), you can restart the economy earlier and have a smaller recession, but in the longer term, hours worked are lower — because you’ve got more dead! Similar conclusions follow in other papers; see Atkeson (2020). I don’t know of a serious paper that says opening up early leads to a net positive outcome, given some positive weight on the cost of quality-adjusted-life-years. Of course, if you’re rentier who can avoid contact, and let workers take on the risk of dying, for those the benefit-cost ratio is likely greater than one.

On point (2), I have no idea what he means by the statement. It sounds very insightful, but seems absent of content.

Mr. Moore made these statements as the fatality rate was projected to have peaked (but by some measures had not yet). If there should be a second surge in fatalities — as seems likely in the absence of an extensive testing system — then some of the blame must be laid at the feet of Mr. Moore, apparently a member of Trump’s Council to Reopen America. 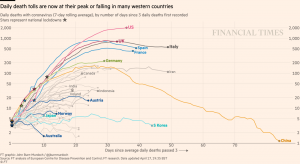