The NBER Business Cycle Dating Committee officially announced on June 8 that the peak of the U.S. Covid-related recession was in February 2020. This announcement was done very rapidly after the occurrence of the peak, due to the very specific nature of this recession. In this post I compare U.S. recessions since WWII by assessing their severity, defined as their amplitude multiplied by their duration.

On June 8, the NBER Business Cycle Dating Committee (BCDC) officially announced that the peak of the U.S. recession was reached in February 2020. Some previous Econbrowser posts already suggested that February was indeed the end of the longest economic expansion in history (128 months), see for example here and here.

What is more surprising is to see that it took only 4 months to the NBER BCDC to officially announce this recession. In general, the delay between the date of business cycle turning points and their official announcement is much longer. The average delay (since 1980) for peaks is 7.3 months, while the average delay for troughs is 15.2 months (see Figure 1). This gap between peaks and troughs reflects the well-known business cycle asymmetry between expansions and recessions. It also reveals that it takes more time to identify when a recession ends rather than when it starts. As regards the current recession, its specific nature due to a well identified external shock makes that the BCDC rapidly decided to call for a recession.

Figure 1. Delays of official recession announcements by the NBER BCDC since 1980 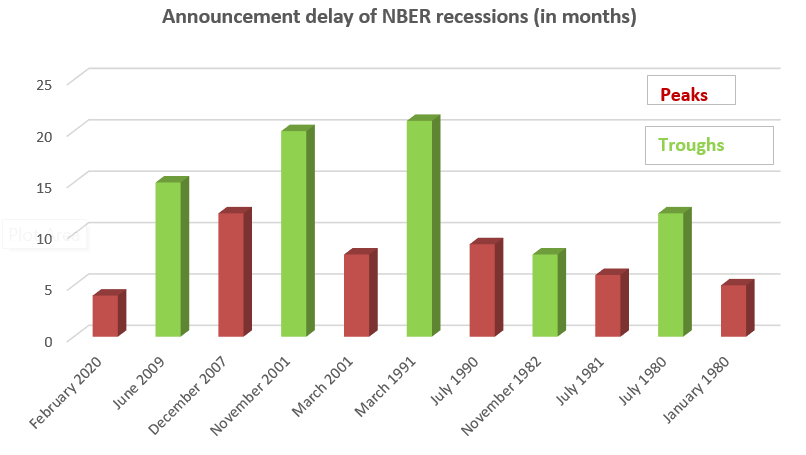 Another stylized fact of the current recession is its unusual large amplitude. U.S. GDP dropped by 5% in 2020 Q1 (compared to 2019 Q4 in annualized terms) and is likely to drop again by about 40% in 2020 Q2 according to current nowcasts from NY Fed and Atlanta Fed. This is why the NBER BCDC didn’t hesitate to rapidly call for a recession. Even if the recession is likely to be quite short (2 quarters according to CBO forecasts), its severity is likely to be quite strong. The severity of a recession is defined in the literature as its amplitude multiplied by its duration and divided by 2 (see Harding and Pagan, 2002,  or Darné and Ferrara, 2011). As shown in Figure 2, the severity index measures the area of the triangle ABC. The amplitude is measured by the drop in GDP level between the peak and the trough (expressed in percentage terms), while duration is given by the NBER BCDC.

Figure 2. Amplitude and durations of recessions 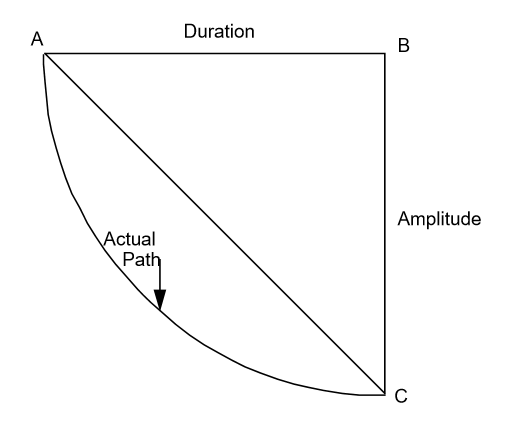 Severity indexes for previous U.S. recessions are presented in Figure 3. The severity of the current recession is computed based on CBO forecasts (-39.6 % in Q2 2020 compared to Q1 in annualized terms), assuming thus that it will last only 2 quarters. Under this hypothesis, we get that the severity of the Covid recession will be large but of same order as the one of the Great Recession in 2008-09 (lower duration but stronger amplitude). Thus this large expected severity induced the NBER BCDC to not wait as long as usual to officially call a recession.  Interestingly, we also note that the severity index for the 2001 and the 1970 recessions are today positive (based on current real GDP from BEA). 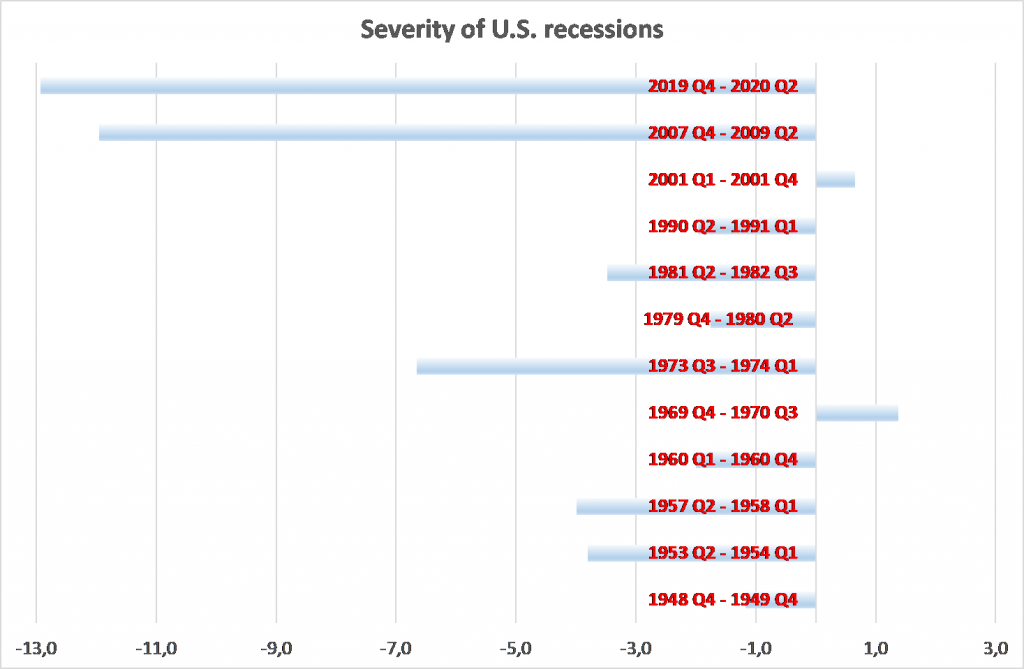 6 thoughts on “Guest Contribution: “A Severe US Recession””