This particular piece of research was brought to my attention by Patrick R. Sullivan, who is fond of quoting talking points from the MacIver Institute, the National Center for Policy Analysis, Cato, in addition to the Pacific Research Institute. The study in question purports to show:

The most interesting relationship is between a state’s [energy regulation efficiency] ranking and its economic growth rate. High ranked states on average grow faster than those ranked low. Moreover, the higher rate of economic growth is associated with faster employment growth. Energy regulation can, therefore, be an important factor in determining the eventual prosperity of a state.

The authors painstakingly compile indices for all fifty states; the indices and aggregate index are reproduced in all their technicolor glory in Table 16 from the study. 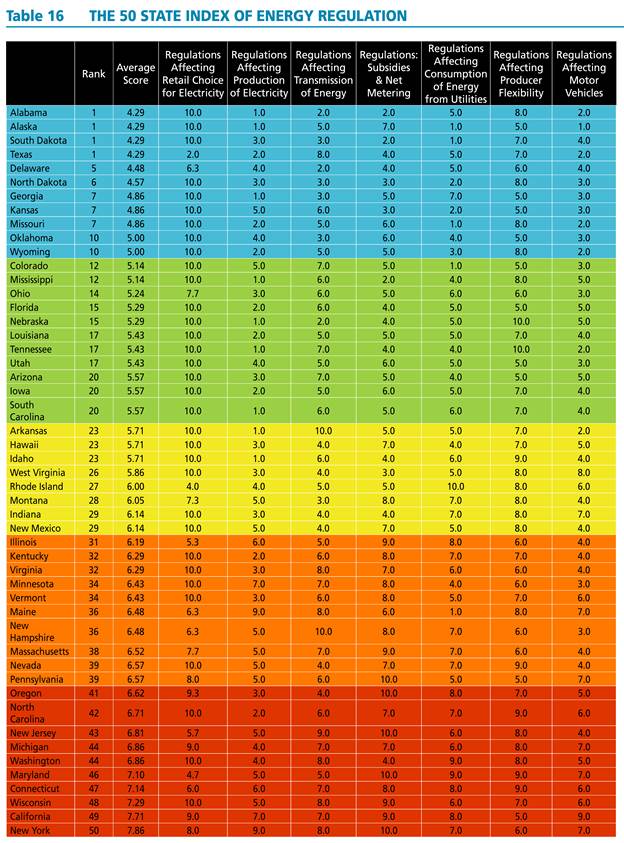 They then show the statistics for the quintiles for energy regulation efficiency ranking and growth, and note a positive correlation.

[NB: As far as I can tell, the authors have used the nominal growth rates of GDP, rather than real (which is pretty odd); the reported growth rates are not expressed in annual rates]

The table and the text are notable for the omission of any discussion of statistical significance. At this point, any researcher worth his/her salt should hear the sirens going off. (The hand-waving in footnote 81 is also a tip-off, and also some cause for hilarity.)

If one estimates the regression analog to Table 18, using ordered probit, one finds that the relationship is not statistically significant at the 10% level for the ten year growth rate. 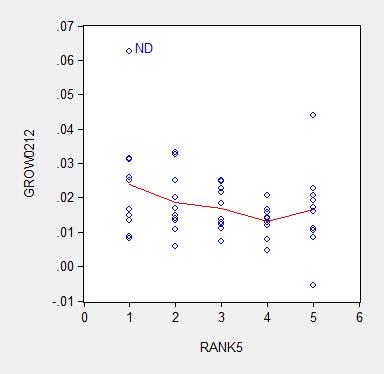 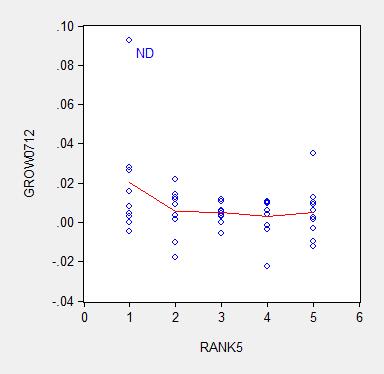 I estimate the regression:

Where y is an average annual growth rate, and rank is a quintile rank. Estimation using ten year average growth rates leads to:

Notice that the adjusted R2 increases substantially with the inclusion of the oil dummy, indicating the minimal explanatory power associated with the Pacific Research Institute index.

In order to allow people to confirm the fragility of the correlation highlighted by Pacific Research Institute, I provide the data here (raw real state GSP data here).

It is astounding to me that an organization can spend all the resources to compile these indices, and yet not do the most basic statistical analysis taught in an econometrics course. It is even more astounding that some people take these results at face value. Apparently the aphorism that there is “one born every minute” holds true.

58 thoughts on “I Killed Some Brain Cells Today: Episode 2”