The United States dollar, after one of its most prolonged weak spells ever, has now re-emerged as the preferred currency for global investors. Across trading desks in New York, London and elsewhere, analysts are rushing to raise their dollar forecasts based on the resurgence in the American economy.

This confidence is buttressed by today’s third release of the 2014Q2 GDP report, which revised upward q/q growth to 4.6% (SAAR). [1]

It’s interesting to note where analysts locate the source of the dollar’s strength:

…the increasing push by investors into the dollar can be seen as a favorable report card on the United States economy, highlighting good performance in crucial benchmarks such as growth and fiscal responsibility, and an increasingly competitive position abroad because of a boom in energy exports.

That is the US economy is growing faster, with quantitative/credit easing, forward guidance, a more stimulative fiscal policy (read, less dedicated to government spending cut based austerity measures) — a policy mix many conservatives had decried as leading inexorably to higher inflation (something which has not occurred, and would if anticipated be leading to a weaker dollar).

That being said, it’s not clear that a strengthening dollar is an unambiguous good — particularly in a situation where the output gap is still substantially negative. A higher dollar renders less competitive American goods and services in international markets. Even though the extent of the appreciation is small at the moment, continued appreciation could prove problematic. From Kennedy/Bloomberg:

…this week [Federal Reserve Bank of NY President William Dudley] became the first Fed official to comment on the U.S. dollar since the Bloomberg Dollar Spot Index touched its highest level on a closing basis since June 2010. “If the dollar were to strengthen a lot, it would have consequences for growth,” the 61-year-old Dudley, a former Goldman Sachs Group Inc. economist, said at the Bloomberg Markets Most Influential Summit in New York.

“We would have poorer trade performance, less exports, more imports,” he said. “And if the dollar were to appreciate a lot, it would tend to dampen inflation. So it would make it harder to achieve our two objectives. So obviously we would take that into account.”

Determinants of the Dollar’s Recent Behavior

So how much of the dollar’s recent strength is attributable to the change in monetary policy, in itself responding to news about relative economic performance? This is a hard question to answer using the conventional models of exchange rates. The simplest real interest differential model, which relies upon uncovered interest parity and sticky prices a la Dornbusch-Frankel, relies at least empirically on stable processes governing interest rates. (Formally, in the Dornbusch model with sticky prices, all gaps in price levels, real money stocks and interest rates close a proportional gaps). 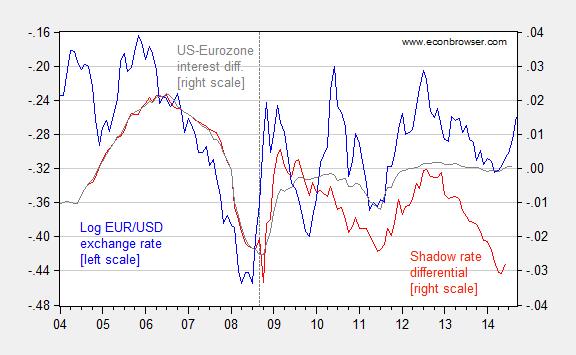 In order to get some measure of anticipated future policy rates, I also plot the shadow interest differential for the US-euro area, where the shadow rates are calculated based upon the methodology in Wu and Xia (2014). Notice that the correlation now becomes obvious. Unfortunately, the ECB series has not been calculated out to 2014M08, so we miss out on the most recent months when the dollar has surged against the euro. However, we can guess that the euro shadow rate has likely declined in the wake of the ECB’s moves toward credit easing.

The dollar’s rise has been broader based; the euro accounts for only a share of the trade weighted dollar — 16.2% of the broad index, and 40.4% of the index against major currencies (see [1]). Nonetheless the euro-dollar exchange rate is highly correlated with the broader indices (aside from the period from late 2011 through 2012). A regression of the major currencies index on the EUR/USD exchange rate (in log first differences) over the 2004M01-2014M09 period yields a OLS coefficient of 0.66, adjusted R2 of 0.83. 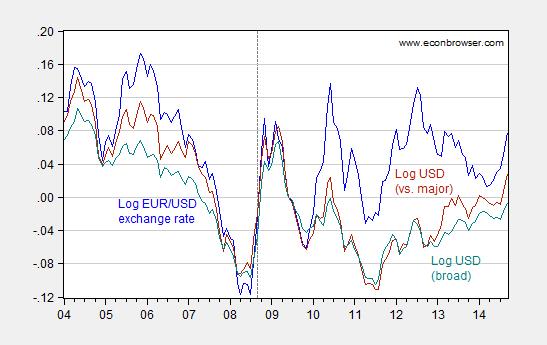 The foregoing suggests the following first differenced regression (the levels regression specification doesn’t seem to be cointegrated), where I have augmented the “shadow” interest differential with the CBOE VIX [2]:

This is a relatively high coefficient of variation for a first differenced exchange rate specification. Hence, I’m relatively confident that the regression captures the fact that changes in real interest differentials, combined with a risk measure, affect the dollar. (I’ll update the regression and Figure 1 when I obtain updated shadow rates for the ECB).

There’s a bit of triumphalism in some of these reports — see in particular this panegyric by Moore and Kudlow at Heritage, entitled The Return of King Dollar. A stronger dollar induces some expenditure switching away from US goods and toward foreign goods; of course the underlying strength of the US economy will likely swamp these effects, but still output and employment would likely be less than it otherwise would be in the absence of dollar appreciation.

Stehn at Goldman Sachs (not online, 9/23) uses the Fed’s FRB/US model combined with an inertial Taylor rule (1999 version) to simulate the impact of the broad dollar appreciation of 3% since the beginning of July.

…, we find that the recent appreciation (if maintained) would lower real GDP growth by about 0.15 percentage point (pp) in 2015 and 0.1pp in 2016. If the dollar continues to appreciate, these growth effects become more significant at 0.25pp in 2015 and 0.3pp in 2016, as the effect of cumulative appreciation builds in outer years.

Second, the inflation effect of dollar appreciation is negligible. …. The intuition for a very small effect on inflation is that inflation in FRB/US depends primarily on the level of slack in the economy, not the growth rate of output.

I’d state this in a slightly different way — the cumulative impact on the level of GDP relative to no appreciation is 0.55 ppts. Whether this is big or not depends on one’s perspective. With the current output gap at approximately -4%, using August 2014 CBO estimates, half a percentage point of GDP is not insubstantial in my mind. Hence, I’d argue that the move toward starting to raise the Fed funds rate and/or other policy rates should be tempered by the impact on the value of the dollar.

For more on evaluating exchange rate behavior at the zero lower bound, see this post and this post. Using Taylor rule fundamentals, here; and a recap on exchange rate models here.

For discussion of the impact of exchange rates on US trade flows, see this post.

11 thoughts on “The Rising Dollar and Macroeconomic and Policy Prospects”