This headline “US Recession Imminent – Durable Goods Drop For 5th Month, Core CapEx Collapses”, following on “Forget Recession: According To Caterpillar There Is A Full-Blown Global Depression”, impelled me to check to see if I’d missed something.

The first thing that I wanted to inspect was the term spread, in this case the 10 year-3 month spread. 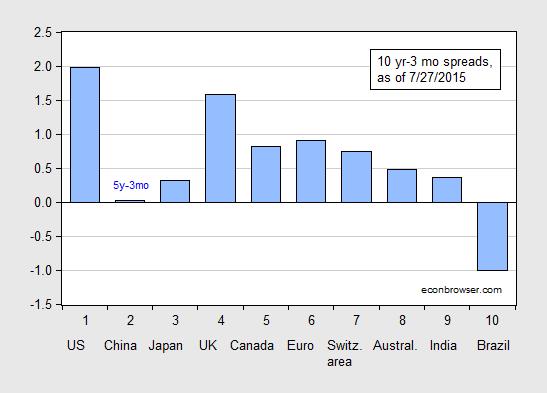 Interestingly, the US spread is larger than it was in April when I last examined the spreads, which seems to suggest that a US slowdown is not imminent. Of course, there is no guarantee that in an era of zero short rates, quantitative easing and (over an even longer period) foreign central bank purchases of long term Treasurys, the traditional correlation between spreads and growth (and recessions) hold. The only other country with a negative spread is Brazil.

Since the levels of the short rate are also important for predicting recessions, as reported in just-published Chinn and Kucko (2015) (Table 6), I also present the underlying short and long rates in Figure 2. 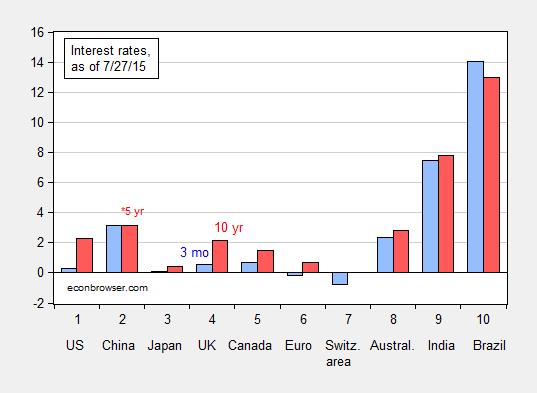 Hence, while spreads are currently positive in most countries, short rates are also high, and particularly so in Australia, India and Brazil.

Now, shrinking spreads usually signal slower growth six to 12 months ahead, at least in the US context, so it could be that the spreads were signalling earlier the imminent recession. I don’t off-hand have those spreads from six to 12 months ago, but I did record the spreads in the post back in April, about three and a half months ago. Figure 3 repeats the relevant graph. 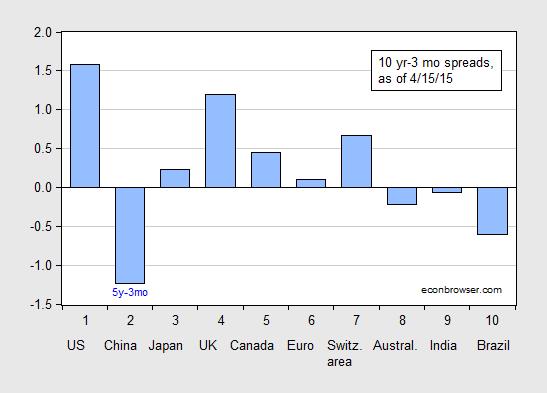 Back then, China, Australia, India and Brazil all recorded inversions, although as I mentioned at the time, there was little statistical evidence I knew for the predictive power of term spreads in these countries. As it turns out, slowdowns — although not necessarily recessions — did manifest in China and Brazil.

Interestingly, the yield curve did not invert in Canada, either in April (as shown in Figure 3) or before; nonetheless the country has just recorded one quarter of negative growth (-0.6% SAAR in Q1). The closest to inversion was +0.75% in January 2015. But then, in Chinn and Kucko (Table 3), we didn’t find evidence that the Canadian spread predicted growth in the 1998-2013 period.

Real Indicators for the US

At this juncture, I think it is useful to examine the data. Figure 4 depicts five key indicators examined by the NBER Business Cycle Dating Committee for identifying peaks and troughs: nonfarm payroll employment, industrial production, personal income ex.-transfers (Ch.09$), manufacturing and trade sales (Ch.09$), and monthly GDP from Macroeconomic Advisers (Ch.09$). I normalize on the end of 2014 as that is the peak in industrial production. 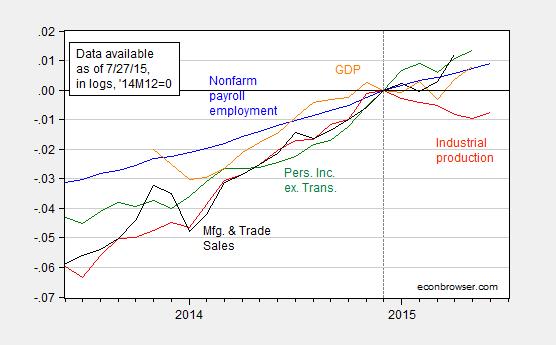 While industrial production is 0.7% (log terms) below peak, the other series are as of latest recorded data still rising. Since the later observations will be revised (which is why the NBER BCDC waits months to make decisions), one would not want to “pull a Lazear” or (heavens forbid) “pull a Luskin”, and assert “no recession imminent”. However, at the moment, growth — albeit slow — seems the likely outcome for the US.

However, for my taste, the slowdown in industrial production (and manufacturing) is worrying, and given the persistent strength in the dollar, one would not want to be too complacent. To the extent that policies can be implemented to keep the dollar from appreciating further, they should be.

World trade volumes have taken a bit of a dive, and some have taken this to mean a global slowdown. Does this signify a recession? The answer to this question hinges upon the extent the trade slowdown in the wake of the global financial recession is structural (e.g., less deepening of vertical specialization) or cyclical. There’s some debate in Chapters 1-3 in this VoxEU volume.

The July World Economic Outlook update doesn’t predict a global recession, but it certainly highlights downturns in certain areas (2015 q4/q4 growth in Latin America/Caribbean is forecasted at -0.1%, while Russia is slated for -4.8%. China is forecasted for 6.8%, down from 7.3% in 2014.

That being said, it’s an open question how resilient East Asian growth will be to a more than anticipated deceleration in growth. Then, prospects for a global recession depend a lot on how a global recession is defined — a marked slowdown or an actual decrease in global output.

18 thoughts on “The US in Recession? The World?”