The answer is “yes”.

Reader Ed Hanson asserts asks if that economic policy uncertainty is no higher under Mr. Trump than during other periods of election, transition and new administration.

Your post always have a point, so what is it? Are you showing that for the Trump administration, and despite the constant anti-trump rants we read and see in the main media, that uncertainty index is generally falling? And that means what, that Trump seems better than most recent politicians to mean his promises and to follow through on them and people are now realizing this and uncertainty is reduced?

Sure wish you had extended your plot to cover other administrations so we could see if the pattern of rising uncertainty just before gaining office, followed by reducing uncertainty is the normal trend. Is it?

I have plotted the entire span of the economic policy uncertainty index from Baker, Bloom and Davis in several previous posts [1] [2] [3]. However, to formally and comprehensively address this query, first consider the data: 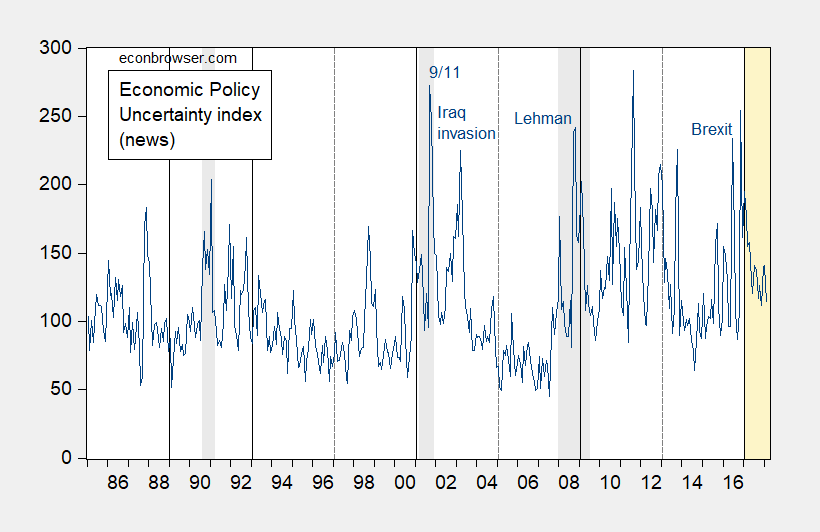 Economic policy uncertainty as measured by Baker, Bloom and Davis does seem elevated before and after new administrations, but it’s hard to tell. I estimate the following OLS regression, over the 1985M01-2018M02 period:

The proportion of variation explained is fairly low; in addition the residuals look highly non-Normal.

The Jarque-Bera tests strongly rejects the null hypothesis of Normality.

I re-estimate using quantile regression (Least Absolute Deviation), which estimates the conditional median (rather than conditional mean as in OLS).

In other words, the Trump administration is indeed “special”; economic policy uncertainty has been higher than expected, even conditioning on the newness of the administration (and not including the elevated uncertainty associated with the Section 232 tariff announcement on 3/1).