That’s the title of a new article in the Economist:

There are three main reasons to suspect overheating might be on the cards: emerging evidence that the downturn may prove temporary; generous stimulus; and the Federal Reserve’s monetary-policy strategy.

The article recounts the calculation of what is needed to fill the output gap, and the possibility that the Biden package (see numbers here, from CRFB) over-fills.

One key question in my mind is — how large is the output gap? If we use the CBO’s most recently published estimate of potential GDP and the mean forecast of Wall Street economists, then the output gap shrinks to zero by 2021Q4. 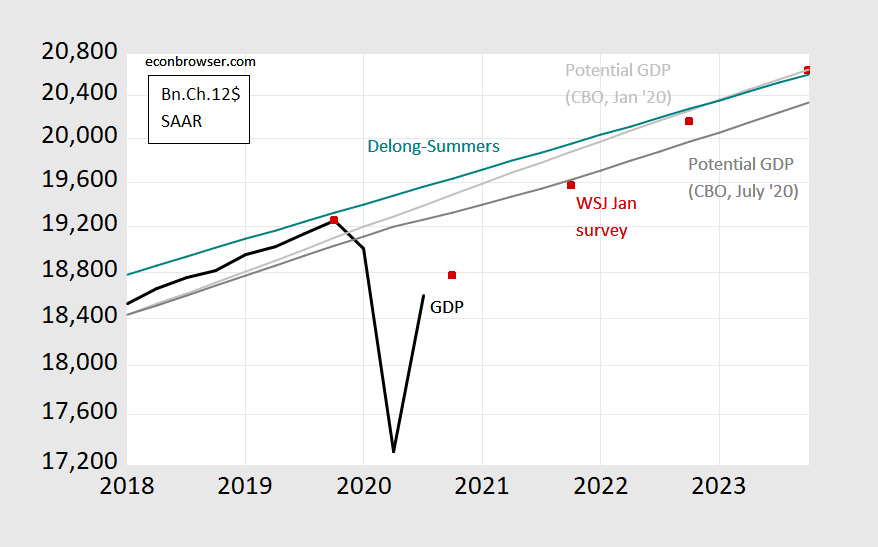 If on the other hand, potential GDP is closer to the level the CBO projected in January 2020 — so essentially assuming not a lot of the hits to investment actually occur — then the output gap is zero at end of 2023. The CBO revised downward its estimated potential on this basis (CBO, July 22, 2020, p.3):

CBO expects that the pandemic and resulting recession will significantly affect the level of
potential output over the next several years by reducing the level of investment. In the  agency’s assessment, recent developments will have little effect on workers’ long-term willingness to supply potential hours of work. By contrast, lower investment will leave potential output about 0.7 percent lower in 2023 and 2024 than it would have been if the pandemic and recession had not occurred. Through 2030, much of that shortfall in investment will be made up as businesses respond to growing demand for their products and services, but larger federal debt is projected to crowd out some private investment.

Which potential is right? As discussed in this post, perhaps neither. Perhaps the Friedman “plucking model” of maximal GDP is more appropriate. Then the teal line in Figure 1 is right. The output gap shrinks to zero in 2023 as above. But the (absolute value of the) output gap on the way there is larger.

As it turns out, inflation is more responsive to the “shortfall” defined using the plucking model than deviations measured using CBO estimates of output gap (see this post).

From this vantage point, calculations based on conventional measures of the output gap are flawed. The output gap over 2021Q2-Q4 would be $530 billion instead of $157 billion (using the July 2020 CBO estimate).

How much GDP will would grow in the no-stimulus counterfactual depends also on the course of the pandemic. With new, more communicable, strains extant, the current forecasts could be too optimistic.

I’ve treated potential GDP as largely exogenous with respect to policy. However, if PPP, state and local government fiscal support prevent firms from going out of business, then fiscal support actually widens the output gap by maintaining potential GDP even as it shrinks it on the demand side.

Clearly, the issue of estimating potential GDP is central in this debate. Here are some past posts on the subject of estimation during normal times.

If Output Is Near Potential, Why Is Inflation so Low?

More on Potential GDP and the Output Gap

A Quick Note on Different Views of Potential GDP

Output Gap Measurement and Prospects in the Wake of the Crisis