Yesterday’s advance GDP release for 2014Q3, covered by Jim, was welcome news, and was something Jeff Frieden and I predicted at the beginning of the year [1]. However, while growth seems to be firming, it is far too soon to take away stimulus. Figure 1 shows that the degree of economic slack remains large. [edits 11/6 to accommodate reader Tom’s critique] 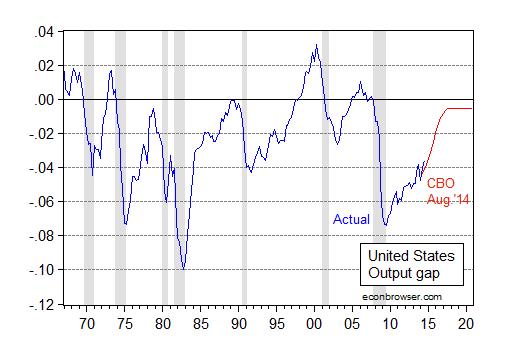 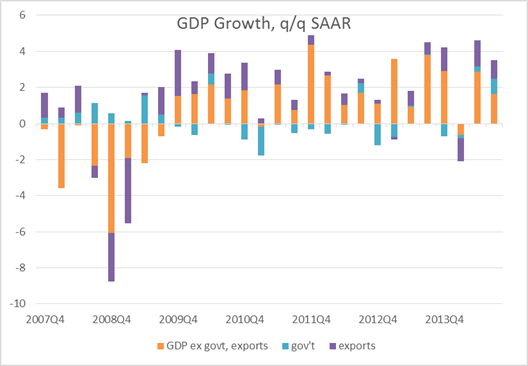 It is unclear why [estimated] government (defense) expenditures rose so much in 2014Q3, but in any case it would not make sense to bet on continued defense spending at elevated levels.[2] [Estimated] Exports are growing strongly for now, but the slowdown in Europe and China puts in doubt that sustaining force (although Goldman Sachs [10/21/2014, not online] observes that a 0.3 ppt markdown in RoW growth implies a 0.1 ppt reduction in US growth, using the Fed’s FRB/US model.) See also Furman/CEA regarding export growth.

Despite the fact that the [estimated] output gap is still large, and substantial downside risks to the outlook persist, I hear people worrying about wage inflation, particularly given the 3% (annualized) upward movement in the 2014Q3 Employment Cost Index (ECI) reported today. As always, it’s important to keep these numbers in context. The [estimated] ECI has risen roughly the same amount as the CPI since the last peak in 2007Q4. This is fact is illustrated in Figure 3. 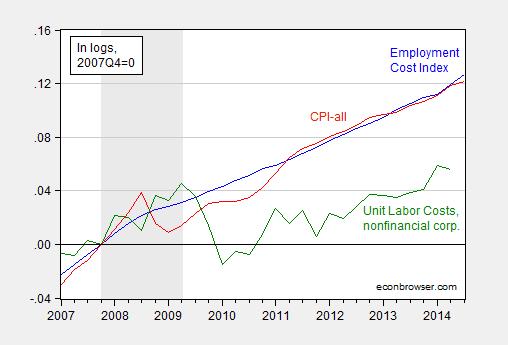 Note that the co-trending of the ECI and CPI implies a constant real wage, while (as we know) [estimated] productivity has been rising. In fact [estimated] unit labor costs in the nonfinancial corporate sector in 2014Q2 was only 1.1% higher than the previous peak in 2009Q2. In other words, [estimated] rapid productivity growth has not shown up in wages thus far, and when a little bit does, there is panic in the (Wall) Street. If indeed we are serious about reversing the declining [estimated] share of labor in national income, then we should not fear a little wage growth. Another way of viewing the increase in wages is that it represents a small shift in balance of monopsony power between capital and labor (not literally monopsony but monopsonistic competition). From Larry Meyer in “Wage-Setting Power and the Labor Share of Income,” Macro Focus 9(6) (Macroeconomic Advisers, October 14):

…when firms have wage-setting power in labor markets (as represented here),

Moreover, if inflation expectations are well anchored, we should not be worrying about higher wage costs feeding into inflation. (Note that if anything, [estimated] expected inflation is dropping.) 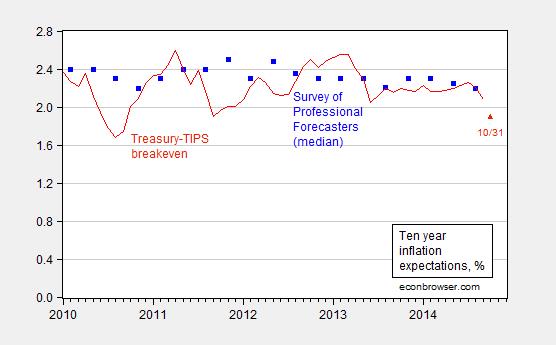