A year ago, Jeff Frieden and I forecast (along with others) in Politico Magazine a boom in output. In light of today’s third release for 2014Q3 real GDP, clocking in at 5% SAAR [1], it’s reasonable to ask, are we there yet?

Figure 1 depicts the upward revision in GDP from advance to final, in the context of the last two years. 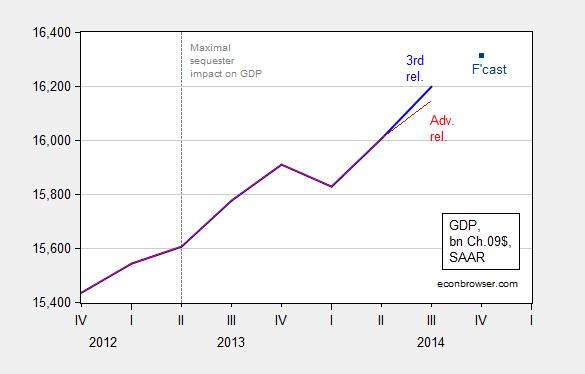 Notice that there is a slowdown in 2013Q2 when Macroeconomic Advisers indicated the maximal impact on growth. (Notice that some observers have argued that since the growth impact was only estimated for two quarters, then the sequester had minimal impact. Of course, those with a familiarity with math recognize that a transient impact on growth has a long term impact on the level unless the impact on growth is offset.)

Where does a lot of the growth revision come from? The answer is in great part — services. 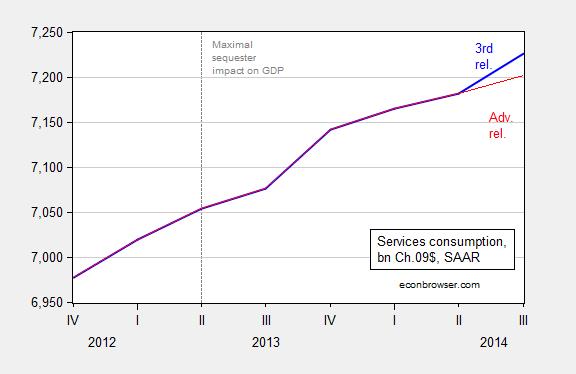 One prediction we made was that investment would surge, given corporate profit levels and the decrease in policy uncertainty. This has come to pass only in part. 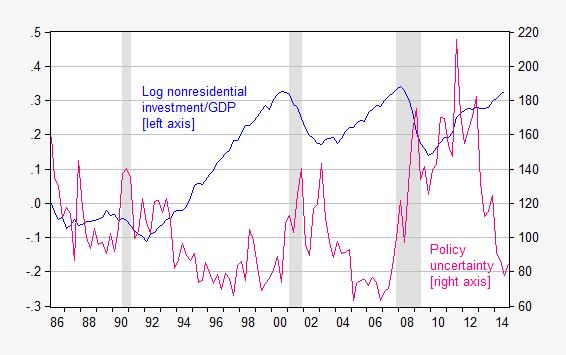 Notice that the investment series is business fixed investment, expressed as a log ratio to GDP. The series only has an interpretation in terms of cumulative differential growth rates since 1986Q1. (For a cautionary tale regarding the use of chain weighted quantities, see this post) By that metric, with the 0.8% upward revision of investment relative to advance, the 2014Q3 differential almost matches the differential of the last two peaks, with an acceleration in the last three quarters (as we predicted). That surge has occurred against a backdrop of reduced policy uncertainty.

That being said, the net ratio is probably lower since economic depreciation of capital has probably accelerated over the past decade as a higher proportion of investment is in shorter lived ICT capital and software.

Interestingly, radio silence on the release from the Joint Economic Committee (Republicans), who typically religiously send me critiques of the latest economic releases. Furman/CEA provides their assessment here.

A final observation: while growth is now proceeding more rapidly, with solid fundamentals in place for growth in 2015, it’s important to recall the CBO estimated output gap remains large, at 3.3% (log terms). Moreover, any number of international developments could still derail growth. As could another bout of fiscal brinksmanship (e.g., [2]).

21 thoughts on “The Boom Forecasted”