National Income and Product Accounts numbers that is.

I was prepping for macro lecture on Monday, which covers open economy macro. One topic I planned to cover is evaluation of the Trump trade war. We know the Phase 1 trade deal with China was a miserable failure, and was failing miserably even before Covid-19 struck the US.

What about the US trade balance overall? As any decent macroeconomist knows, the trade balance is not a particularly useful measure of economic performance in the absence of context, but Mr. Trump has made it a key metric. So, here are US exports, imports, in real terms. I exclude oil to the extent that trade policy doesn’t really impact here, but the results do not change substantively even if oil is included. Even before Covid-19 struck, US real imports were up, and US real exports were down relative to 2018Q1, when I date the trade war starting. (Including oil means that exports were static, up about 1 (one) billion Ch.2012$ (non-annualized).

Mr. Trump has often dismissed services imports and exports as irrelevant (in this sense, Mr. Trump is remarkably “Marxian” in the old sense of the word). So, let’s take a look at the ex-services flows. Why was Trump’s trade war unsuccessful, even on terms he set? Any decent macroeconomist will tell you, but I’ll just quote Blanchard (Macroeconomics, 8th edition): (1) “To the extent that it triggered a tariff war, and other countries responded by raising tariffs on US goods, US exports might decrease in line with the decrease in US imports..) (2) To the extent that the US economy was close to potential, as was indeed the case in 2018, an increase in output might lead to overheating and thus force the Fed to increase the interest rate. This in turn would lead to a dollar appreciation… (3) Even if the Fed did not increase the interest rate, expectations of a lower trade deficit and thus smaller need for foreign borrowing, now and in the future, may lead to an appreciation of the dollar… (4) Finally, while it was increasing tariffs, the Trump administration also implemented a tax reform passed in 2017, which led to a large increase in the fiscal deficit in 2018…” (page 408).

I’ve mentioned each one of these (save 3) in previous posts. To these, let me add that the slapdash and unprecedented nature of the trade policy approach led to really high levels of economic policy uncertainty — both at home, particularly with respect to trade policy, and abroad — that further appreciated the US dollar, crowding out net exports further. 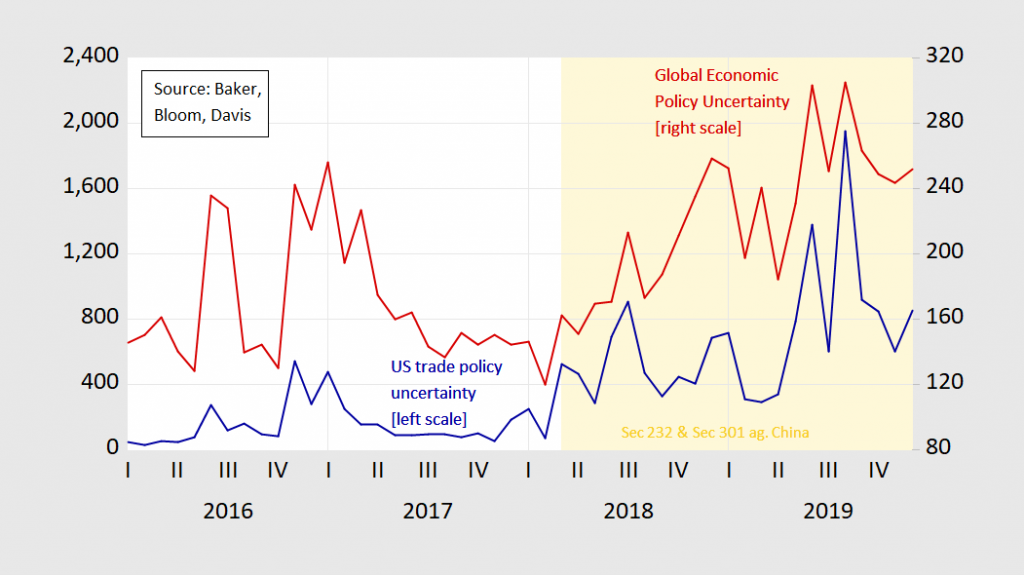 As of November 2019, Blanchard indicated that it was “too early to make strong conclusions” about the trade war’s outcome. I think with an additional year’s data, we can conclude that — on Mr. Trump’s own terms — Trump was a loser.

Postscript: Before I forget, the war was a loser on employment, consumer costs, etc. too…

Manufacturing Employment, Hours and Output and the Trade War, Pre-Covid-19

The US-China Trade War/Soybean Front: Home before the (Next Batch of) Leaves Fall

Dispatches from the Trade Wars

16 thoughts on “Trump’s Trade War by the NIPA Numbers”